Ridesharing is going to be receiving a warm welcome in B.C. 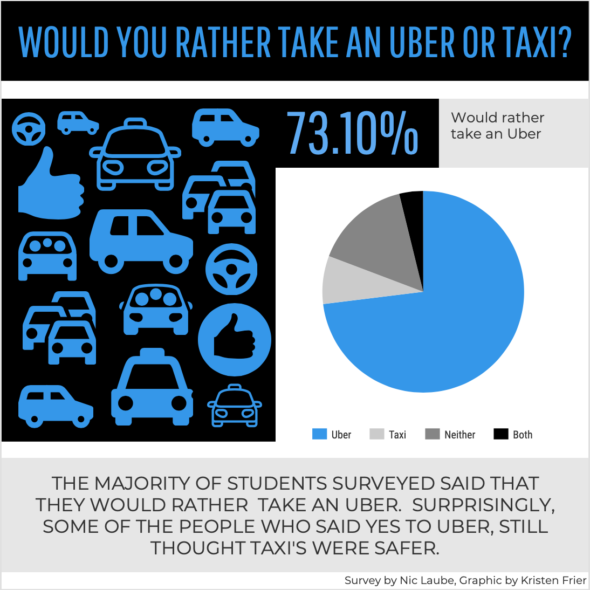 I can count the remarkable taxi cab rides I’ve had on one hand.

The sad truth is that, 90 of the time, when I call for a cab in Vancouver, the service doesn’t always meet my expectations. I’ve had rude drivers who barely say a word to me, drivers who show up 20 or 30 minutes after they were supposed to, and even some drivers who just leave if I don’t get in the car quickly enough. Experiences like this may be why most taxi services around these parts have a rating between one and two stars online.

This isn’t to say that all taxis provide poor service and we should put them out of business, but by comparison, services like Uber and Lyft are an enticing choice. Affordable, quick, and convenient for both you and your driver, Uber’s business model could be a superior alternative to the taxi companies’, and based on the results of a survey I passed around KPU, it seems most students here agree. 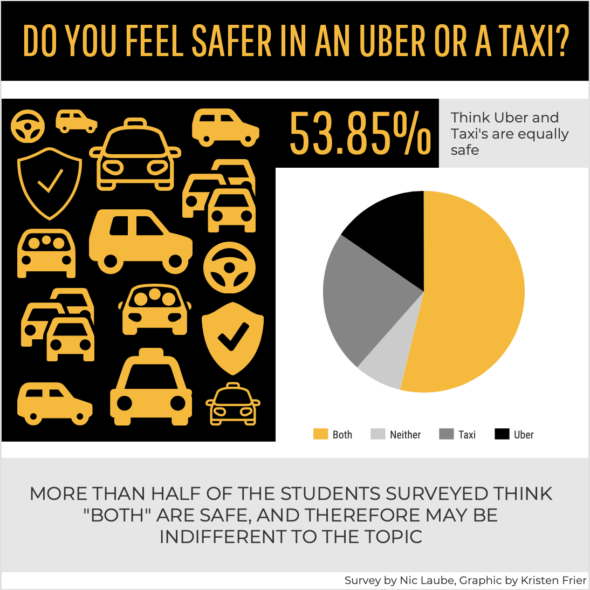 All of that considered, it may come as a surprise to you that I’m actually glad that Doug McCallum, the Mayor of Surrey, has been raising hell for the last few years to try and stop Uber and Lyft from migrating here. I don’t agree with all of his claims, sure, but I think the solution B.C. has settled on is actually ideal.

Let’s get into the pros and cons of both taxis and ridesharing, and try to understand how it might impact our city in 2020.

For anyone who hasn’t been keeping up to date on these developments, some rules have already been imposed on ridesharing. The most important of these is that all drivers have to have a Class 4 license, which requires a little more time and effort than your basic Class 5 license.

Additional testing and safe-driving earns you the Class 4, and according to citynews1130.com, obtaining a Class 4 license is correlated with a 13 per cent reduction of the chance that you’ll get into an accident that year. Neat.

Thirteen per cent might not seem like much, but it makes a difference, especially when you consider that drivers are taking this chance every time they leave for work, and you want your service to be as safe as possible.

When it comes to safety, accidents are unfortunately not the only thing we have to worry about. It’s also important to consider the assault cases that have been filed against ride-hailing companies of all kinds, Uber and Lyft included.

According to an article on CNN’s website written by Sara Ashley O’Brien, Nelli Black, Curt Devine, and Drew Griffin, there have been at least 103 of these cases in the U.S. alone.

In most cases the culprits are repeat offenders who have committed crimes even before registering as a driver. It isn’t a very shocking fact, but Uber Driver isn’t a very difficult position to obtain, even for people like John David Sanches, who was sentenced to 80 years in prison for committing serial assaults against his passengers.

It’s important to note that ride-hailing companies are not the only service guilty of this. The use of security cameras and more frequent check-ins by taxi companies is definitely a deterrent for drivers, but ultimately not an impassable obstacle. There have been allegations of sexual assault, physical assault, and especially robberies against taxi drivers long before Uber came about. Just look at John Worboys, a cabbie in London who had allegations made about him as far back as 2002, until he eventually got caught and sentenced for his crimes seven years later.

It has been difficult to locate any statistics about whether ride-hailing companies or taxi companies have had more instances of assault filed against them. However, when you consider the fact that Uber has been around for a much shorter time than taxi cabs, it’s surprising that their numbers can even hold a candle to those of cabbies.

I can’t say that companies like Uber have had more instances of safety breaches, but it seems like they’ve had more in a shorter period of time. For our own sake, we must always be skeptical of who we get into a vehicle with, regardless of who they work for.

Safety, albeit vital, isn’t the primary factor in the demand of ridesharing.

Quality, cost, and convenience are what really draw in customers, and this is being compromised by the Class 4 situation. Less people have been signing up to be drivers for ride-hailing companies in Vancouver, because they know they’re going to have to jump through hoops to get their licenses.

These companies have built their success on convenience, and compromising that aspect at all is a dramatic risk for them to take, even for the security of their passengers. Insisting on policies like the requirement of a Class 4 license has landed the politicians of B.C. who fought for them, like Doug McCallum, in a bit of hot water with the public.

How KPU Feels About Ridesharing

The choice of who to ride with isn’t only in the hands of these companies. It also belongs to their clientele. On Sept. 18, I went around KPU Surrey and handed out surveys asking how students felt about ride-hailing and taxi cabs.

When asked, “Do you feel safer in a taxi or in an Uber?” 53.85 per cent of the survey-takers said that both felt equally safe. Over half of those who took my survey, didn’t feel the need to worry about their safety in either case. In other words, the scandals surrounding ride-hailing and taxi companies have barely even affected surveyed students’ trust in their services, and they don’t really care what kinds of license their drivers have, so long as they have one.

Among those who said they felt safer in taxis, a few of them still stated that they preferred to ride Uber to their destination.

It made me doubt whether these legislations truly even mattered in the public eye to begin with. There were some who still had loyalty to the taxis like Mayor McCallum, sure. There were also a few who stated that they felt unsafe in both taxis and Ubers. But the vast majority, consistently, either did not care about which option was safer, or didn’t acknowledge any danger in the first place. The choice seems clear: Uber is in.

Over 80 per cent of the students wrote that they were excited to some degree for the arrival of Uber, with only a handful having some reservations. At the end of the day, when asked which they would rather take to their destination, 73.1 per cent went with Uber while only 7.69 per cent decided to hail a cab.

These numbers make sense. According to Investopedia, ride-hailing has many positive aspects that make it easy to overlook its weaknesses. Most of these strengths are most appealing to students, who made up the entirety of the survey demographic.

But don’t let those numbers decide for you.

There are reasons not to trust Uber. There are reasons not to trust taxis, even with their more scrupulous screening process and layers of accountability. However, ride-hailing has been considerably better received, with most ride-hailing services garnering close-to perfect ratings on the google play store, and 61.54% of KPU students agreeing that Uber provides better service.

Ride-hailing can be quicker and more convenient than taking a taxi. Taxis sometimes have to be reserved far in advance or called and waited upon for 20 or 30 minutes, but an Uber can be paid for digitally and usually arrives within a few minutes. If you pick someone nearby it can even be less than that, and there’s no need to go looking around for an empty cab. Instead you can just check your handy Uber app. That kind of speed and efficiency can make the difference between catching that ride to ace your quiz, and catching a fat F because you miss it entirely.

Taxi companies assign you a driver without you getting to see who it is. Uber, on the other hand, has an advanced rating system that allows people to pick and choose who’s driving them. It’s far from a proper way to protect against dangerous drivers, but at least you have the ultimate say in whose vehicle you enter.

Finally, consider the cost. A taxi is almost never cost-effective. Most rides add up to more money than a steak at The Keg. Services like Uber and Lyft generally cost up to 30 per cent less.

In all likelihood, a lot of people are going to migrate to the ride-hailing apps. Judging by the survey results, a lot of students will, but taxis have not gone out of business in the rest of the world, even with the influence of massive moguls like Uber and Lyft. They’ve somehow managed to stay competitive in a changing industry, even without a changing business model. There’s a reason why people call them the “taxi cartel” here in Vancouver.

They’re ready to fight for their spot on the curb.

There’s no right answer regarding which service anyone should choose to take. Uber sorely lacks the levels of accountability that taxi cabs have, but both types of service come with risks. In my opinion, Uber is a higher quality service, but there’s a lot to be said for the loyalty with which Vancouver taxis have served us in the past. Our provincial government will continue to protect them as a result, and I’m glad that they are.

Regardless of the car you claim for your next hail, the reason why I support our government’s solution is because it gives Vancouverites a choice. Cabbies aren’t going anywhere, but ride-hailing is in for the long-haul as well.

Frankly, I’m excited to try them and decide for myself which one’s for me, and I hope that you are too.