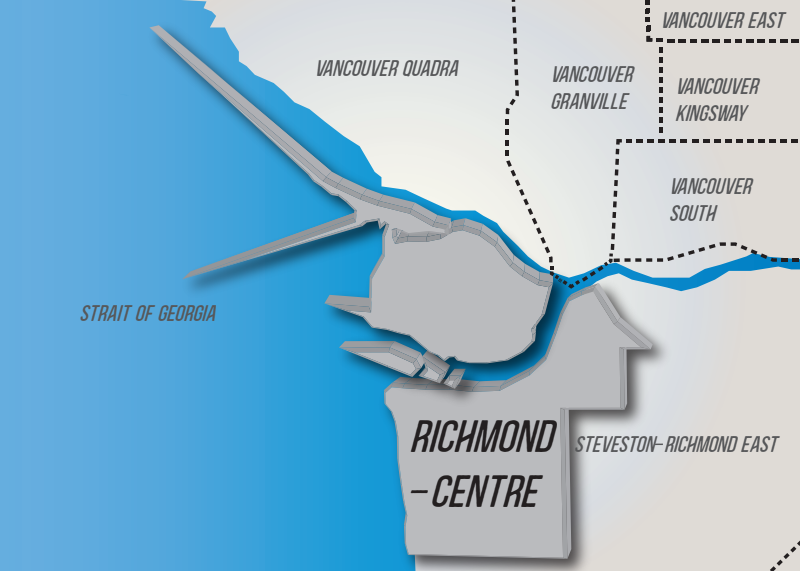 Kou currently works as an accountant. He received his Bachelor’s degree in 1991 from the University of Lanzhou, located in Northwest China, and immigrated to Canada 10 years later. Afterwards, he completed a Bachelor of Commerce at the University of British Columbia in 2006 before receiving his Master’s in law this year.

Kou says he spends a lot of his time attending events in the community and helping those in need. His platform on the Liberal Party website mentions “contribution towards the community, protection for middle class families, support for seniors, and building an economy that works for everyone” as his goals. He was contacted for an interview but did not respond.

Wong is hoping to be re-elected in the Richmond Centre riding. She immigrated to Canada in 1980, earning a PhD from UBC in Instruction and Curriculum in 1993. She has been the MP for Richmond since 2008, and has filled many different roles in the community, from teaching at Vancouver Community College to opening a centre for small businesses which offered the first course for business management to immigrants in Chinese and English. Wong has volunteered in Richmond and teaches newcomers to Canada various professional skills and tips for adjusting to life here. Some of Wong’s goals for her campaign are to “provide safer communities, a fair and compassionate immigration system, an environment that is protected in a practical and reasonable way, small business unimpeded by high tax, and red tape and protection for our children and families.”

She was contacted for an interview but was unavailable.

Innes has lived in Richmond all his life and was a lifeguard before running in the election. He has been involved with volunteer work in the community ever since high school, which resulted in him receiving the Merit and Rick Hansen award, according to the NDP webpage.

Innes’ goal for his riding is “fighting to create more affordable and more sustainable life for hard-working families in Richmond. He wants “to deliver universal pharmacare and affordable housing and tackle climate change with a place to create good green jobs.”  Innes is also an activist with the BC Federation of Labour. He was contacted for an interview but he did not respond.

Raunet wants to reinvest in local economies and prioritize small businesses over transnational cooperation. Along with her work as a political candidate, Raunet is also a mother of two and a teacher at a French immersion school. She earned her Bachelor’s degree at Reeds college and her Master’s in International Studies at Simon Fraser University. She spent five years working in Taiwan and “observing China’s rise to economic power,” she explains.

“The Green party understands that the world of work is changing …. We invest in higher education,” she says. “We are actually proposing free tuition for all colleges and universities and the federal portion of student debt would be excused. Basically, for students [wanting] to go to school, [they] would go for free.”

“By voting Green, especially in a riding as conservative as Richmond Centre, you’re sending a very clear message to whoever goes to Ottawa that this is a set of policies [and] priorities that I think are essential,” she adds.