A walk through the gallery’s Garden in the Machine exhibition on display until Dec. 15 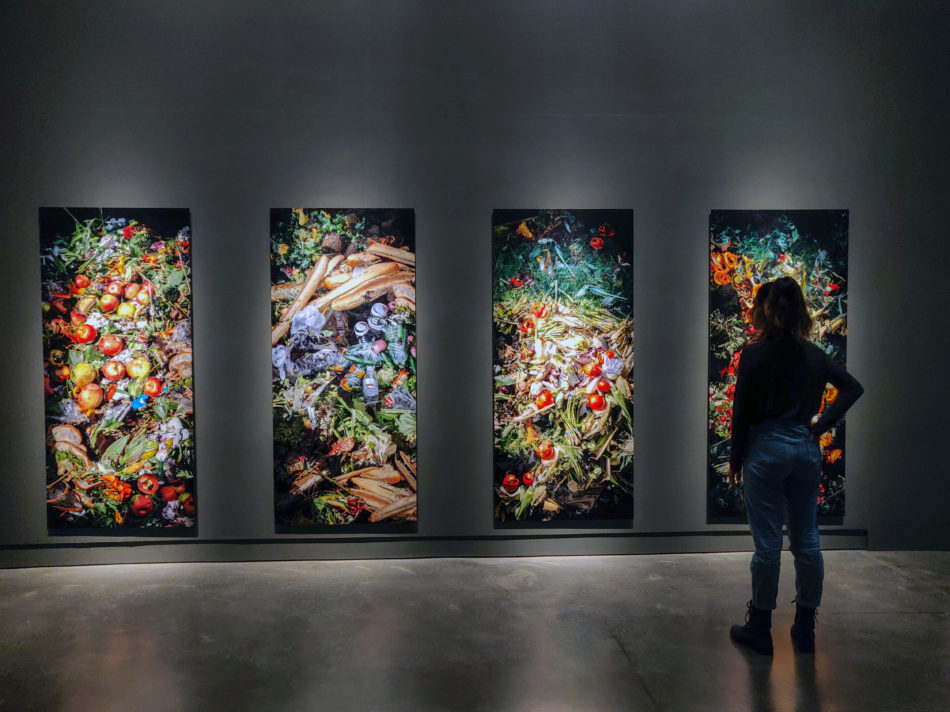 The digital world is just as much a part of our lives—and therefore our artist inspiration—as the natural world. In one of the five art installations currently showing at the Surrey Art Gallery, Garden in the Machine, Helma Sawatsky examines what this means in today’s technology-obsessed society.

“This exhibition marks 20 years of displaying artists in our tech lab, which always aimed to examine what artists are doing with new technology,” says Jordan Strom, who curated the exhibit.

The first installation presented in the exhibition is a series of moving images projected on the walls. Strom introduces the piece as Faisal Anwar’s “Charbagh,” which means “four gardens.”

“Within classic Islamic architecture, this idea of the charbagh is an important space of meditation, recuperation, and spiritual connection,” says Strom.

Colourful Persian-influenced geometric designs animate and disintegrate on the wall, which Strom explains are “generated by data from photos from social media.”

The photos—compiled from farmers, activists, artists, and ecologists in the community—are meant to express the transformative effects of environmental activism in social media. A photo from a community garden in Newton appears and disappears as Strom begins to explain Leila Sujir’s “Forest Breath.”

“[The artist] highlights the impact of global warming here, south of Fraser,” he says. “We often hear about ice caps melting in the arctic or sea-rise, hurricanes down south, but they were interested in highlighting how it’s registering on our local ecology.”

The next installation is a series of photographs that highlights issues with systems of food management and waste. With “Data Mulch,” Crescent Beach-based artist Helma Sawatsky compiles images into large scale mosaics.

“They are composites of about 100 digital photographs each,” Sawatsky says, explaining how she effectively “mulched data” to create the exhibited images. She says the project started 10 years ago when she was attending Emily Carr to complete a Bachelor’s degree in Fine Arts, back when the campus was still on Granville Island.

“I’d walk past the big compost bins near the Granville Island strip,” Sawatsky recalls. “Eventually, curiosity compelled me to start looking inside the bins.”

She refers to the hundreds of single photographs she took as “compost material” because of how they eventually made up the larger-scale composite panel images.

Sawatsky considers “Data Mulch” to be an environmentalist piece because of how it deals with the reality of “accumulation and excess.” This connects, she says, to her heritage as well as inspiration from Dutch still-life painting, which also portrayed scenes of “opulence and excess” with subtle hints towards “decay and rot.”

She adds that her pieces “are hung and sized like mirrors, as they are meant to reflect onto the viewer their own culture, their lifestyle, the decisions we make.”

“The garden in the machine, in the most literal sense, is that I photographed a garden of organic materials into a machine that I was using to capture the images,” she says, adding that this speaks to the “modern relationship” between the organic material that sustains us “biologically” and the technology that inspires us artistically.

Take a look at the exhibition schedule and visit the Surrey Art Gallery soon to check out the rest of the exhibit for free or by donation. There’s also an exhibition tour on Oct. 16 and an artists’ talk with Lawrence Paul Yuxweluptun and Paisley Smith on Oct. 26 about their interactive virtual reality installations.