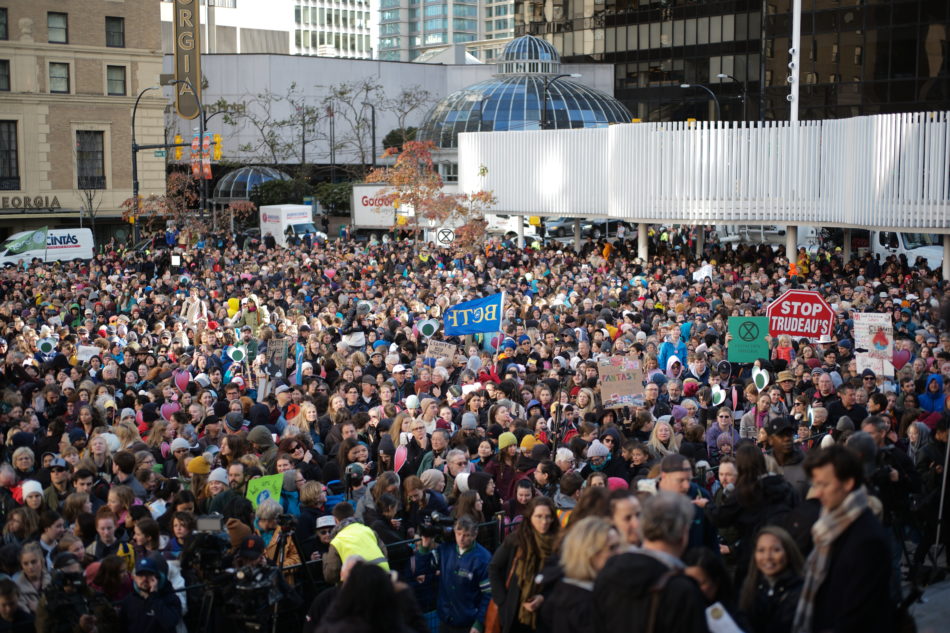 Every square meter of the Georgia Street side of the Vancouver Art Gallery was packed on Oct. 25, crammed full of people who were there to protest government and corporate inaction on climate change.

The protest was headlined by the Sustainabiliteens, a group of high school-aged young people from across the country who are suing the Canadian government. Their lawsuit alleges that the government is not sufficiently protecting their rights to life, liberty, and security as a result of inaction on climate.

Albert Lalonde, one of the plaintiffs in the lawsuit says that “we have to hold this government accountable for their actions which are threatening our lives.”

“We don’t have any other choice than to use the tools at their disposition, and that’s to go through the judicial system to get justice.”

Many well-known climate activists and politicians were also at the protest, including David Suzuki, his daughter Sevrin Cullis-Suzuki, Dakota Bear of Idle No More, and Greta Thunberg.

Elizabeth May was also present at the protest.

“I support the climate strike movement, and as the Green Party leader, I know we’re on the course to catastrophe,” she says. “We don’t have enough Green MPs in Parliament to be able to insist on climate action, so we’re going to have to keep taking it to the streets.”

Having reflected on the results of the election, she says that her priority is “making sure that the parties that claimed they have a climate platform actually develop one.”

The march, which began at the Vancouver Art Gallery, made its way through downtown Vancouver — first along Hornby, then north via Burrard.

The protest travelled along West Cordova before eventually making its way back to the Art Gallery. Among the marchers was Greta Thunberg, surrounded by volunteers, organizers, and photographers.

“I’m here to promote Indigenous sovereignty. I’m here to stand together, united with the people. I feel that this is an issue that affects all people, but also for the seven generations that come after us,” says Dakota Bear, who is of Nêhiyaw Plains Cree ancestry.

Bear thinks it’s amazing that the protest organizers are young people and believes that they will lead the way in taking climate action. He also believes that the new generation is on the right track to respectfully acknowledging the importance of Indigenous voices in political discourse .

The front line of the protest was led primarily by indigenous elders, with a few police officers on motorcycles moving ahead to control vehicle traffic.