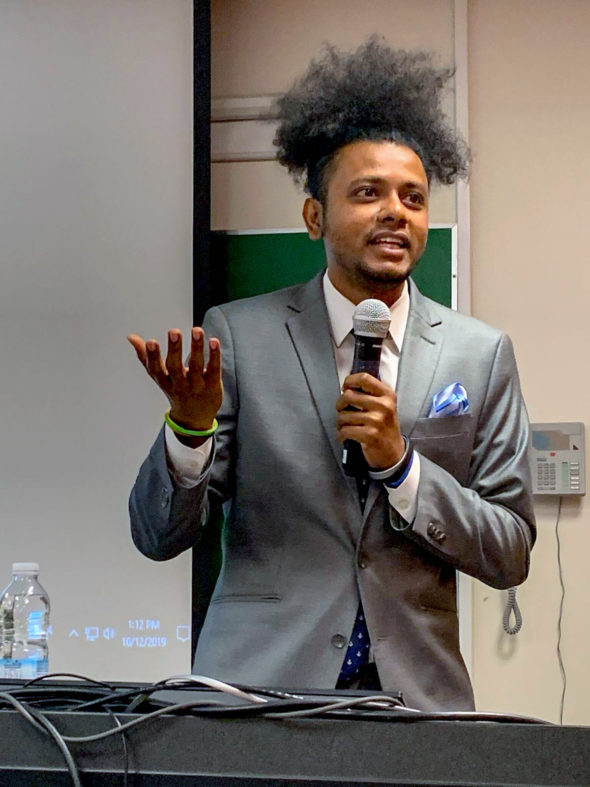 Dr. Suraj Yengde is an award-winning scholar and activist from India. He is an author of bestseller Caste Matters. (submitted)

A seminar on the caste system in India, led by award-winning Harvard scholar and celebrated author Dr. Suraj Yengde, was held at KPU on Oct. 12. He entered a room buzzing with tension and filled to capacity with students and members from the local South Asian community.

The caste system is a class-based social hierarchy that has existed in India for over 2,000 years. It is a social system which divides people into four main categories: Brahmins, Kshatriyas, Vaishyas, and Shudras. Loosely translated, this breaks down to religious knowledge keepers, warriors, commoners, and untouchables.

The caste system created an unfair society with the higher castes such as the Brahmins holding the majority of the power and resources while the lower caste, the Shudras, were relegated to doing menial work on the margins of society. It was a system which was used to violently oppress “lower caste” people for millennia.

Although the caste system was officially abolished in 1950, most people of South Asian heritage, even the ones living in Canada right now, would still be able to tell you which caste they belong to.

And for most of the South Asian population in Surrey, that caste would be Jatt, a privileged, land-owning caste.

In an egalitarian country like Canada which is so proud of its diversity, why are people still hanging on to something as prejudiced as caste? This is what Dr. Suraj Yengde, someone from the Shudra caste himself, came to Surrey to talk about. He spoke to an audience of predominantly higher-caste Punjabis about dismantling their own privilege to make room for more people like himself, who have historically been discriminated against using caste-based violence.

His passionate lecture, paired with an impressive panel of academics and artists from the community, made for an afternoon of intense learning and dialogue which lasted for more than three hours. From comments overheard before the event began, such as, “This is an Indian problem. Why is he talking to us about this in Canada?” it was clear that many people were unaware of the role they may play in upholding the caste system.

Dr. Yengde used Punjabi music to explain his point. In the South Asian community of Surrey, a majority of people are from the region of Punjab. On any given day it is common to hear Punjabi music coming out of cars as they pass by on the road, and many big names in Punjabi music like Jazzy B got their start in Surrey. The city is a hotspot for Punjabi music, which often speaks of and glorifies Jatt pride.

In one song quoted by Dr. Yengde, the word Jatt was used 38 times over three minutes. He feels that when you are displaying pride in your privileged caste like this, what you are doing is making the caste system real.

This is the first event in Surrey to tackle this complex topic. A high number of Indo-Canadian students, as well as a significant number of international students from India, study at KPU. This makes it relevant to everyone on campus to do their part in dismantling the ongoing injustices of the caste system.

KPU’s Asian Studies department has a number of courses which cover the caste system in detail. Additionally, Dr. Suraj Yengde wrote a book titled Caste Matters which can be used to further delve into this topic.