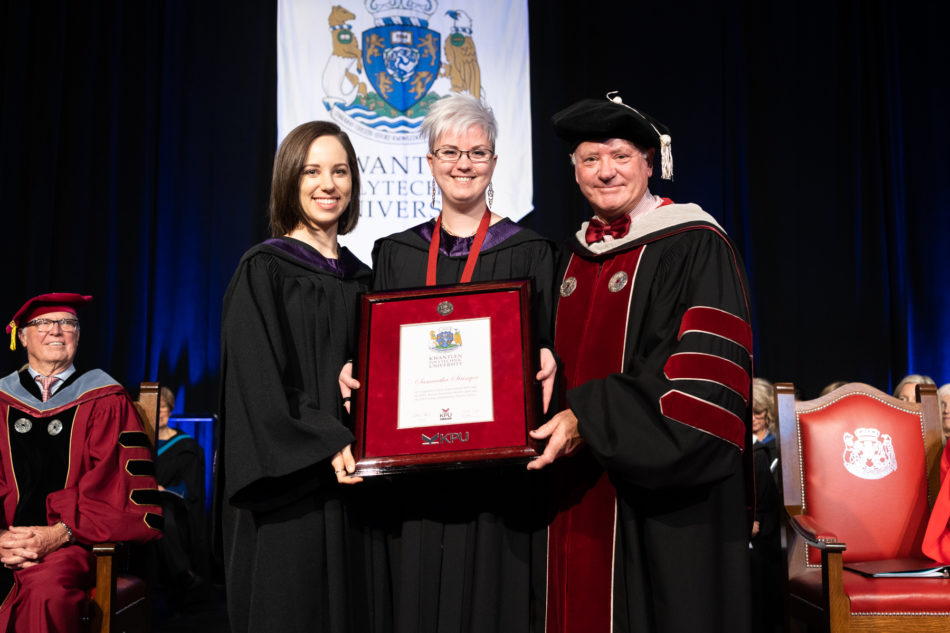 Local designer Sam Stringer was offered a chance to showcase her collection in Vancouver Fashion Week just one day after graduating from a four-year bachelor’s degree program at KPU.

Stringer has showcased two collections in VFW: One named Embers and Ashes and one named Vesuvius. The designer is now releasing her third collection, Reign, and her work is directed towards female entrepreneurs looking for black tie attire and women who never really stop working.

Stringer has been featured in multiple magazines and articles such as Vogue, Vanity Fair and Amazon Fashion, and most of her pieces are custom-made.

Stringer is not only a clothing designer but also a photographer, and she shoots many of her own photos of models wearing her creations. Her work, from boudoir to editorial, is also featured on her website.

The designer says her experience at KPU was extremely hands-on, and attending the university was the leading motivator in her move from Victoria to Vancouver. Her time at KPU helped her prepare for entering the fashion industry.

“The teachers and students at KPU have always supported and inspired me,” she says.

Her creations challenge some of the issues facing the fashion industry such as sample sizing and fast fashion. Stringer’s collections Vesuvius and Embers and Ashes focused on the value of locally made design, and they feature dress sizes from 2-16.

Stringer now works as a divisional lab coordinator for KPU and Wilson School of Design, and describes her job as fast-paced, including everything from working with students and faculty to researching innovations in the fashion industry.

“I love it. I get to work in the labs and with faculty and our technicians that get to look at innovative, new machinery and make sure our students get everything that they need,” she says. “I learn from this job every day. I think it’s a pretty cool opportunity to be able to work in the industry and also in education. It’s a mix of both.”

Stringer says she has used the connections she made at KPU to help further her career and education, and recommends that students do the same.

“Something I didn’t realize before coming to Kwantlen was how many resources students are given access to. You’re surrounded by so many incredible people in the industry and making so many connections with people that will be your colleagues later on, I’m literally working with people that used to be my teachers and it’s such a great experience,” she says. “I’m really happy to be recognized by the people who taught me.”