Checking in with the Newest Multi-Faith Centre Chaplains 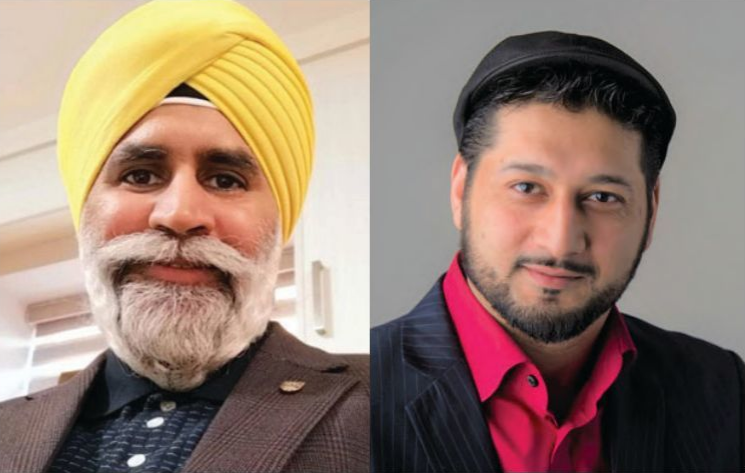 Earlier this year, two new chaplains joined the Multi-Faith Centre at KPU, seeking to connect with students, hold discussions around faith with them, and put smiles on their faces.

Chaplains are individuals who study and represent religious or philosophical traditions, though they commonly work in non-religious environments like universities, hospitals, and other public institutions.

Chaplains Inderjeet “Indy” Singh and Junaid Khan are the two very friendly individuals who recently had the opportunity to join KPU’s Multi-Faith Centre.

Singh has been a Sikh chaplain at KPU for about two months, and Khan has been serving as a Muslim chaplain on campus for six months. Both of them say they are very excited about having embarked on this brand new journey with KPU students.

Singh has been working with Sikh youth since he was 18, running camps in Malaysia, Singapore, Vietnam, and Indonesia. He currently holds a Master of Education degree and a Bachelor of Arts and Communication from Bowling Green University in Ohio, USA. Singh is open to being a mentor, an advisor, or a friend to any student he encounters.

“We are here to support with relationship issues, issues when you are stressed. We can be a first responder. We can be so many different roles,” he says.

Khan attended Princess Margaret Secondary and has a psychology degree from Simon Fraser University. He has been involved with the local Muslim community for over 20 years, and is also part of a television series called Divine Love: Hub-e-Rasul, which airs on JoyTV every Saturday at 1:30 pm.

He enjoys talking about topics like energy and spirituality and wants to help students who are struggling with their faith or who have any questions about their religion. He says that his curiosity and passion for spirituality was sparked when he was in Grade Nine and has been important to him since. He was able to conduct meditation circles when he was a student at his university and he wants to start meditation classes here at KPU as well.

“I feel that the things we should be educating and teaching should be very universal. It shouldn’t just be my way and my religion,” he says. “Yeah, I’m there as an information source for those Muslim students, but I feel like we should teach in a way that is universal teaching for everyone.”

The chaplains are taking part in this year’s fifth annual Thrive Week, held from Oct. 28 to 31. The event will also be a food drive, with organizers collecting canned goods for homeless shelters.

For Singh, being involved in this event comes from a desire to “be a support to the community.” To meet this goal, he also plans to set up the Sikh student association.

After the association is set up, he would like to organize events and eventually do a Sikh speaker series once a month. Rather than making this series exclusive to only Sikh students, he encourages any student from any religion to go and participate.

“Let’s eventually mature into an environment where we can discuss issues [like] Islamophobia,” he says. “Sikhs have been labelled as terrorists. What does that mean? Who are those people? Because they don’t represent all of us.”

The Multi-Faith Centre is located in Fir 341 on the Surrey campus. Students can talk to the chaplains by sending them an email or by dropping by their office on Tuesdays from 10:00 am to 3:00 pm.