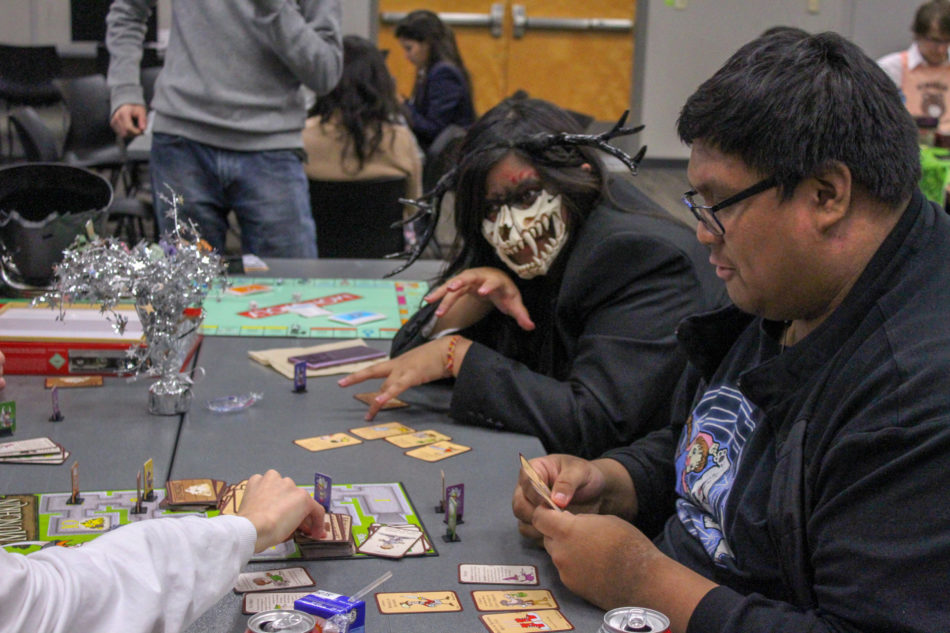 Revival of The Gaming Dead, hosted by the Kwantlen Gaming Guild, took place in the Cedar Conference Centre on Oct 31. (Nicole Gonzalez Filos)

The Gaming Guild spooked KPU students for its sixth annual Halloween event, the Revival of the Gaming Dead, on Halloween this year.

The event was free to attend and offered hot and fresh pizza to anyone willing to grab a free slice from a volunteer dressed up as a swordsman. The event also provided free candy, chocolate, pop, and water.

Attendees could play video games like Super Smash Bros Ultimate, where participants could battle their best friends and brag about their skills.

Another multiplayer option available was Just Dance, a great game for a quick workout to burn off the calories from all those free snacks. They also had games like FIFA, NHL, Call of Duty, Halo and many more.

Students could also play board games like Monopoly, Risk, Casual Chess, and Cards Against Humanity.

Jessie Nguyen is the current and first female president of the Gaming Guild. Nguyen says that she hopes to introduce non-gamers to games, especially if they don’t necessarily need to be about violence.

“There are other games like Mario Party, where you just kind of work together or work against people. It’s just a simple game,” she says.

The Revival of the Gaming Dead featured a Halloween costume contest in which students got to display their creative and chilling costumes to the judges and spectators for a chance to win $50 gift card to EB Games.

One of the judges for the contest was Ireland Bedard, who has been a member of the Gaming Guild for two years. According to Bedard, the judges were looking for how much effort the participants put into their costumes as well as what they did for their performance.

Ashish Tripathi, a computer science student at KPU, organized the Super Smash Bros Ultimate tournament at the ghoulish gaming event. He has been an active member of the Gaming Guild for four years.

“I think a lot of people come to this event because it’s just something to do to relax while you’re off of classes, to celebrate and to see friends you haven’t seen in a long time,” he says.

He says that gaming has the ability to bring passionate people from different cultures and places together. If students had more events like Revival of the Gaming Dead on campus, he believes there would be a much stronger culture at KPU.

“You get to really just meet new people and try new things that you wouldn’t do, or couldn’t do some other time, ” he says.

“I like the aspect of a bunch of people that don’t have classes together interacting and hanging out,” says General Studies student Ollie Mathews, who was attending the Haloween gaming event for the first time.

“I think is a fun way to meet new people.”

Any gamer is welcome to join the KPU Gaming Guild. The club meets every Wednesday from 1:00 pm to 4:00 pm on the Surrey campus in Birch 266.

It will be hosting a similar (but less frightening) event called Multiplayer Madness during the spring semester.