This Year’s Diwali Festival Lights Up the KPU Surrey Campus 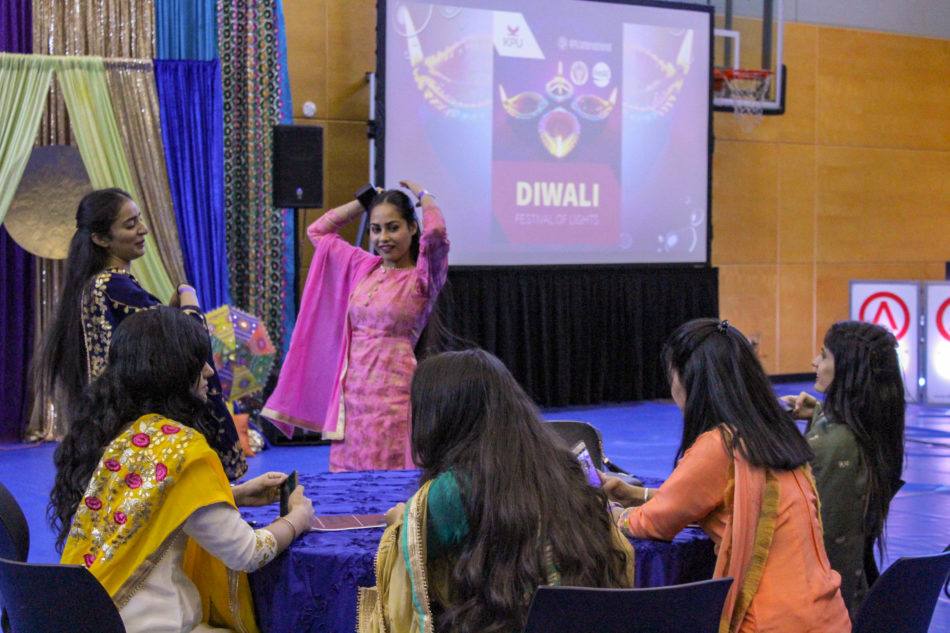 Attendees chat among themselves at the Diwali Festival on Nov. 2 in the KPU Surrey Campus gymnasium. (Nicole Gonzalez Filos)

The KPU International celebration of Diwali festival lit up the halls of the KPU Surrey Campus on Nov. 2, when many joyful students gathered for an evening of dancing and chatter.

Diwali is a five-day festival of lights celebrated by Hindus, Jains, Sikhs and some Buddhists. It represents new beginnings, light over darkness, and good over evil. The event is commonly celebrated with prayer, plenty of fireworks, candles, and rangoli designs which are colourful patterns drawn on the ground using tinted powder.

The festival was organized by KPU International and overseen by Waheed Taiwo, the Coordinator of International Student Life at KPU. It featured a Bhangra dance performance, rangoli, henna art, and Indian cuisine, music, and dancing from afternoon until evening.

Femi Ogunji is a fourth-semester student who volunteered with KPU International to help run the event. Ogunji says he chose to get involved because he wants to give back to the community.

“It’s good to see people who are non-Indians here,” he says. “It’s a part of enjoying each other’s culture because that is what makes us who we really are.”

Manpreet Kaur, who was attending the event for the first time, came with friends dressed in vibrant multicoloured saris.

“It’s great to have diversity and to celebrate the cultures,” she says.

Neha, another attendee, says she chose to come to the event for the second year in a row because of how much she loves to celebrate Diwali.

“Indian festivals are very interesting because we have so many activities to do,” she says. “That’s why I really like it.”

“I would love to encourage people, the new ones who are coming right now … [to] volunteer and be part of the international student department,” says Shreya Verma, a volunteer photographer at the event.

“You will network. You will make connections, and that is what you want.” This was also Verma’s second time at the festival.

Verma says that volunteering with KPU has been fun and rewarding for her.

“It’s something about when you move to a new place. One of the things that tend to go missing or get lost is the culture from where you are coming from,” she says.

In contrast, she feels that festivals like Diwali “help to sort of keep that memory alive.”

The event began with Taiwo making his opening remarks about the Diwali festival, followed by attendees getting Henna and Mehndi art drawn on their hands. A delicious Indan buffet was then opened for the guests, and as the attendees ate, there was a piano performance by a KPU student followed by a talented Bhangra performance.

After the Bhangra performance was over, everyone who attended the event was called to dance and show off their moves. Many of the attendees who weren’t shy moved onto the dance floor with their friends.

KPU International Events hosts and organizes the Diwali festival every year. All students are welcome to join and be part of the celebration.