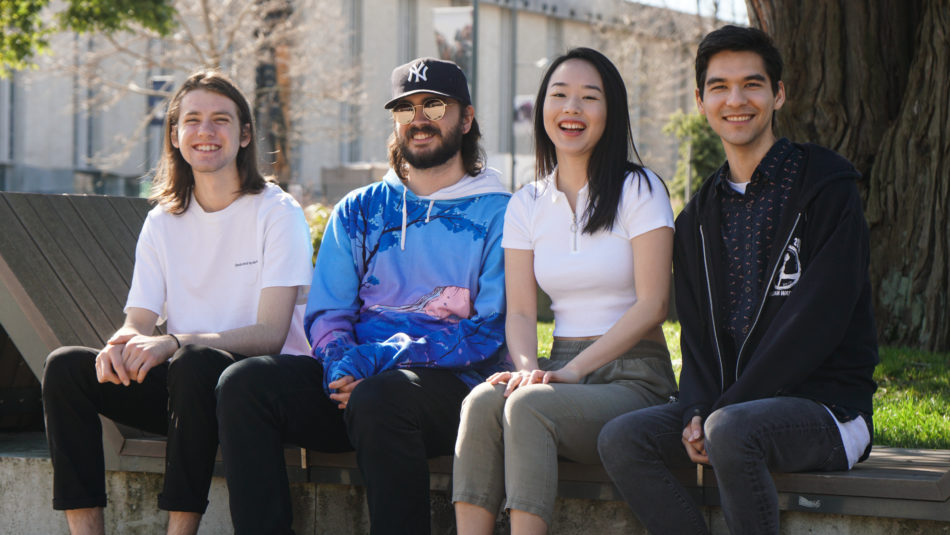 Many of the members of Girlsnails are classically trained but inspired by math rock. (Submitted)

Jackson Bell was starry-eyed at a talent show when he first grew interested in playing music with Michael Robertson, the guitarist who would later become one of eight members of the Surrey-born and based math rock band Girlsnails.

Alone with his guitar on stage, a teenaged Robertson performed a progressive metal riff which impressed Bell so much that he bought a drum kit and taught himself to play along.

“I just thought he was the sickest guitar player I had ever seen. It was like, ‘Holy shit!’ I had never seen anyone play guitar the way he was playing guitar,” he says. “At the time I didn’t play drums or anything. I was a saxophone player, and I was like, ‘Man, I’ve got to jam with this guy.’ So I bought a drum kit. I learned to play drums so I could play with him.”

Quinn Fortin, the second guitarist in the band, joined in a similar way. After a different talent show where Bell and Robertson performed together, he was inspired to teach himself their songs from home.

“One of the most flattering things that has ever happened is Quinn sending me a video one day. He was like, ‘Hey, this is what I did for my guitar recital,’ and he was playing a song that I had written. I don’t even know how he learned it, because I didn’t show him how to play it,” laughs Robertson.

“He knew the songs almost better than I was able to play them, and I was like, ‘Okay!’”

“I did it all by ear,” responds Fortin. “How I learned to play that genre of music is just playing his songs.”

Once the three-piece was finally united and out of high school, they asked Laura Kim to join on vocals. Then came the horn players — Louis Lam on trombone, Keelan Hui on saxophone, and Erica Binder on trumpet — followed by a second vocalist, Sydney Freedman.

Many of the members of Girlsnails have studied music professionally, having received classical training from the UBC, Capilano, and VCC music programs.

“We all had an interest in doing music as a career because we all study music currently or have studied music. It seemed like a natural progression,” says Fortin. “It really kind of shaped the way we appreciate the art. It really shaped our sound and a lot of our choices.”

In the beginning, their tastes were “more emo and punk-y,” as kids growing up in Surrey. As their dynamic changed and musical influences grew more diverse, so did the band’s approach. They’re now one of the only math rock groups in Metro Vancouver alongside locals like Mi’ens, Blessed, Swim Team, and i.o.

“I’ve always been a fan of really big music. I’ve studied lots of orchestral and big band music and am really drawn to huge bands, which is why we started playing with horns,” says Bell. “A big thing for us too is having creativity around us and unpredictability with our song structure, because we do a lot of improvising on stage. Most of the time we don’t ever play a song the same way twice.”

“We were just in the studio listening to all the different versions that we did and none of them were the same,” adds Freedman. “I think it really nicely showcases everyone’s parts Jackson’s able to play saxophone. There are moments where you can just hear Mike and his crazy tapping.”

Girlsnails only has a three-song demo tape out right now, but they’ve just finished recording their first official EP — the band’s “take on pop punk music.” It’s slated to come out sometime in the new year, and work on a full-length album is already underway.

“We’re really trying to do more stuff with overdubbing, getting some crazy instruments, making it bigger,” says Bell. “We really want to put out something that’s more representative of us now.”

“My whole thing is just to do the craziest shit possible,” says Robertson.