Tree planters flocked to the Imperial for the inaugural event on Nov. 14 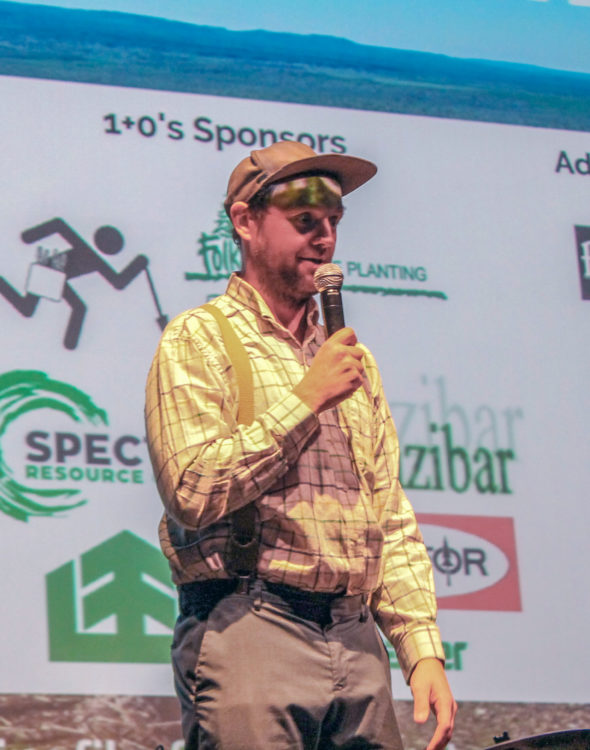 People filed into the Imperial for the festival on Nov. 14, which started with a friendly mixer followed by film screenings, live music, and dancing.

The point of the night was to celebrate the industry, the community, and all of the unique aspects of tree planting that the outside world often doesn’t get the chance to experience.

“Tree planting is an initiation into a new place in our lives. Through tree planting and the incredibly profound community of friends, we are opened up to something new. This is found in the space between trees,” says Tim Tchida, owner of Summit Reforestation and organizer of the festival.

Reforestation is a complex industry. The process of replanting an entire forest that has been cut down involves a variety of parties working together, from raising the seedlings to bidding on contracts and organizing camps and crews. But the act itself — the blood, sweat, and tears of the work — is put in by the planters.

The films started with the classic planter film Do it With Joy, a short documentary by Brinkman Reforestation from the late 70s. The film depicts how the industry got its start in Canada. Young planters with shaggy hair cuts, big glasses, and wool sweaters set out to the cut blocks with grocery bags full of young seedlings, and they used gear that seems ridiculous to modern planters and sparked booms of laughter from the audience.

Other films screened included shorts about the forestry industry, trailers for upcoming planting documentaries, and even some personal shorts created by planters from their summers spent in the bush.

Jasmin Olpinski-Kopiec and Gabriel Chamrad are originally from Montreal, but made their way to B.C. to get in on the planting scene, signing up for work with Apex Reforestation. Jasmine is a third-year planter and Gabriel just finished his first year, but he is antsy to go again this coming summer.

Tree planting is a difficult job. Typically, the average tree planter will work for 11 hours a day, six days a week. The work is physically gruelling and mentally straining. It requires that the planter fill up bags that sit strapped around their waist, filled with 40 pounds or more of baby trees, planting them as fast as they can in a clear cut in the middle of nowhere. Often, the field is filled with fallen trees and bugs that relentlessly feed on the tree-planters’ flesh all day long. After finally getting their bag of heavy trees in the ground, they can head back to their cache and do another, and another, and another until the clock strikes 6:00 pm. Then they can wearily load back into their crew’s truck, dirty as hell and smelling worse than they ever thought possible.

When asked why they keep coming back to such a strenuous job, Olpinski-Kopiec’s answer was simple: “Because of the people.”

“You learn techniques all the time and you really perfect technique. Just seeing my personal improvement, seeing my numbers [of trees] go up per day and seeing how much money I can make … is a big aspect,” says Olpinski-Kopiec.

The audience laughed along as the films before them depicted the struggles of apple-sized blisters on heels and milk jugs filled with Gatorade. What brought people to the event that night was a common understanding that nobody can quite relate to the experiences of tree planters better than other planters.