EXPLAINER: BC Teachers Advocate for New and Improved Contracts

The BCTF continues to discuss contract details with the government 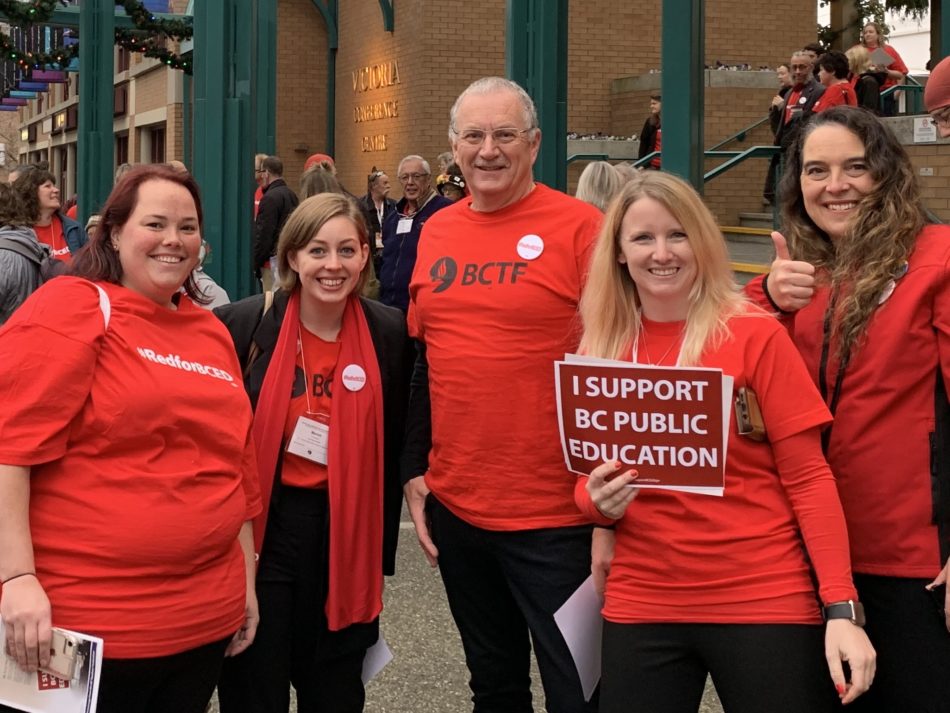 BC teacher strike supporters outside the NDP convention on the weekend of Nov 22. (submitted)

At the beginning of October, British Columbia Teachers Federation said they were short almost 400 teachers. And as we near the end of November, not much has changed.

Hundreds of teachers gathered outside of the 2019 NDP convention in Victoria, B.C. on Nov. 23 after turning down a new contract offer. The B.C. Teachers Federation was offered a settlement by the British Columbia Public School Employers’ Association but refused to accept it.

“The B.C. Public School Employers Association has offered wage hikes of two per cent annually for a three-year term in keeping with what other public-sector employees have accepted, but the teachers’ union has rejected the increase,” reads a Global News article.

Terri Mooring, BCTF president, told the media that low wages are a persisting issue for teachers in B.C., as they are paid less than others working in both Alberta and Ontario.

This problem is closely linked with the lack of available teachers in B.C. as well. Because its teachers are not paid as much as those in other provinces, it’s difficult to convince teachers from around the country to choose B.C. as a place to work. To make it an even more difficult sell, British Columbia has the highest average cost of living in the county.

It is not only wages that teachers are taking a stand on, but also the need for more support in their classrooms. Classes remain overcrowded and teachers are not being given the support that they believe students with behavioral challenges may need.

Many post-secondary students will remember 2016, when high schoolers got an extra-long summer vacation because the teachers were striking. And many students loved it. But in reality, the 2016 strike was a symptom of teachers fighting the provincial government for more control over their situation.

Eventually, that fight became a long, arduous legal battle which made it up to the Supreme Court. It ended with a ruling in favour of teachers “that restored provisions related to class-size, class-composition, specialist teacher staffing ratios, and school-based team.” All of these changes referenced the BCTF’s troubles with the former ministry of education who modified the BCTF contract.

Now, the BCTF hopes to gain an adjusted collective agreement as they move forward with their negotiations. This would entitle them to collective bargaining so that they would be able to regulate their wages and specify their needs for classroom support, counselling services, and adult education.

In a statement from the Ministry of Education’s employer bargaining agent BCPSEA, Board Chair Alan Chell expressed that “the success of any round of bargaining depends on the commitment of the parties to make it work.”

“The mediator has not booked out and we will be communicating further with him,” he said.

BCPSEA says that they are working within the mandate of supplying an annual two per cent wage increase. The BCTF appears to be entrenched in improving wages to attract and retain teachers as well as asking for class size and composition standardization across the province.

Only time will tell how the strike will affect the students that both the BCTF and BCPSEA are mandated to serve.