Canada is not living up to its NATO defence spending commitment, even with Canadian soldiers on NATO missions abroad 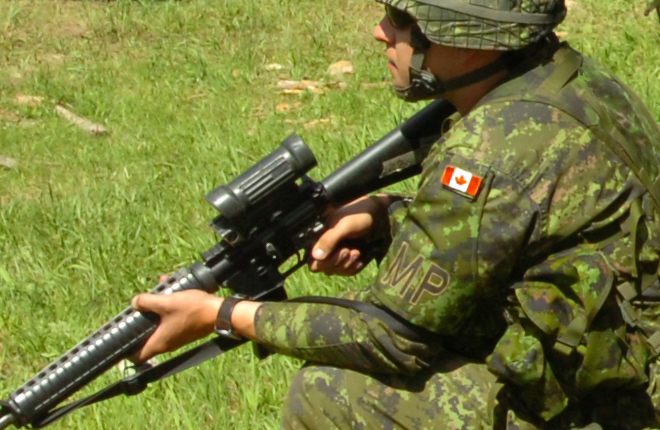 The Canadian Government is not delivering on promises to increase military funding. (wiki.commons)

The current sidearm issued by the Canadian Armed Forces is a WWII-era Browning Hi-Power, known for its small sights, its tendency to jam about once every 62 shots, how difficult it is to use while wearing gloves or for left-handed people, and the fact users are told not to fully load it to avoid wearing out the springs.

It’s so unreliable that there is a running joke that the pistol is more useful to throw at a target than to shoot it.

In the 1920s, the pistol was ranked as a reliable sidearm, but now they are no longer produced, and the Canadian military has been using up the surplus left over from the world war.

Major Carl Gendron, a small arms project director in the Directorate of Land Requirements, said in an interview with Canadian Army Today that “the bottom line is that we don’t have a sufficiently reliable General Service Pistol.”

And that’s just in regards to the sidearm. Our military troops need new tanks and jets, preferably built in this century. The navy needs more ships, as many officers don’t know if they will even get the opportunity to serve on an actual vessel.

As a NATO member, Canada agreed in 2014 to spend at least two per cent of its GDP on defence and military. This is to ensure that each member is capable of standing up to protect fellow NATO members in the case of international threat. A recent calculation from Canadian federal officials says that Canada only contributes about 1.31 per cent of its GDP towards defence.

While his words are harsh, they have merit in this instance. We, as a nation, have not discussed this enough — which was indicated in the lower amount of time spent talking about Canada’s defence spending during the federal election debates compared to many other issues.

The lack of proper equipment and funding to the Canadian military will prevent Canada from contributing to NATO and the global community as a whole. Canada is often seen as a global peacekeeper in the missions it undertakes, and its past roles in United Nation missions like those in Haiti and Sudan have boosted that reputation. This title cannot be upheld unless Canada has a well-equipped force.

In December, Global News obtained documents from the Department of National Defence which revealed that the federal government underspent approximately $7.79 billion worth of promised money for capital projects, including spending on facilities, equipment, and military procurement in the 2017-18 and 2018-19 fiscal years.

This is despite the Liberals’ defence policy, “Strong, Secure, Engaged”, released in 2017, which promises to “provide Canada with an agile, multi-purpose combat-ready military, operated by highly trained, well-equipped women and men, secure in the knowledge that they have the full support of their government and their fellow Canadians.”

This promise is not being upheld.

The war in Afghanistan, which was supposed to only be a two-year deployment, is now the longest conflict in Canadian history. Their equipment was old and unreliable.

After years of increasing defence spending, Stephen Harper’s Conservative government made major budget cuts which caused the military ranks to thin out over the years. Gaining back that loss has been a challenge, and this personnel shortage is a real threat to our forces, and therefore, our nation.

However, fixing it isn’t as simple as recruiting anybody. It must be the right people who are willing to learn and stick around. Without funding for training, our military faces an uphill battle to recruit the thousands of qualified personnel needed to fill out its ranks.

It’s up to Trudeau’s Liberal government to keep the long, outstanding promise of better equipment, technology, and overall support for our soldiers, national defence, and role as a NATO member.

Canadian troops, who are putting their lives on the line despite inadequate funding, need the government to step up.