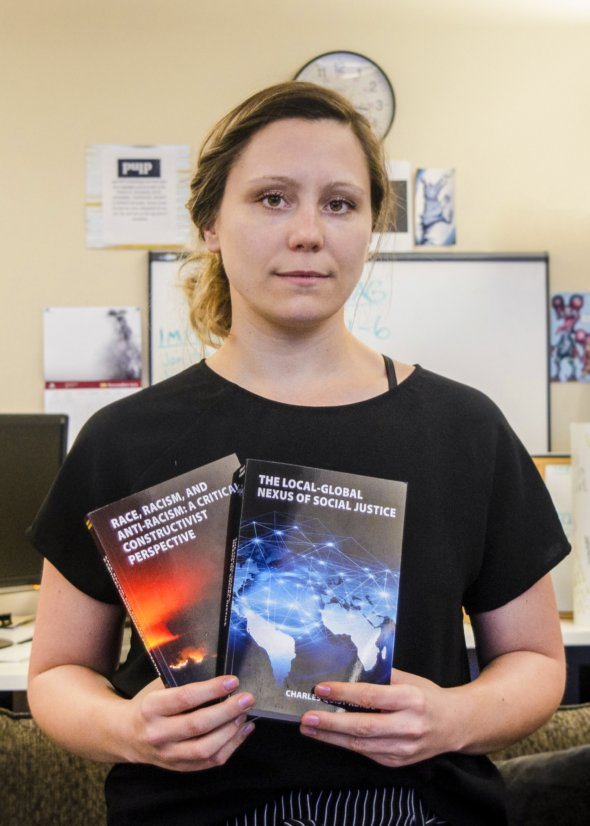 The original version of this article was published online on Dec. 5, 2019. This is the updated full version which was published in print Dec. 10, 2019.

The Kwantlen Student Association has called for the suspension of sales of two sociology textbooks carried by the KPU bookstore, and for the issuing of refunds to students who purchased them. This request follows allegations that the author, KPU faculty member Dr. Charles Quist-Adade, used plagiarized content throughout multiple sections of the books.

The books, Race, Racism, and Anti-Racism: A Critical Constructivist Perspective and The Local-Global Nexus of Social Justice were published in 2019. They are listed as required readings for the spring semester sections of SOCI 4320 and SOCI 1125, respectively.

Quist-Adade is a KPU sociology instructor listed on KPU’s website as the “past immediate chair and former co-chair of the Sociology Department.”

On Nov. 28, The Runner obtained a letter addressed to KPU Dean of Arts Diane Purvey from the KSA which was signed by its vice-president university affairs, Sarah Strachan, and its executive director, Benjamin Newsom. The letter raised concerns about the books and asked for them to be retracted.

“It has recently come to the attention of the Kwantlen Student Association that two books assigned this summer in Sociology courses taught by Dr. Quist-Adade contain substantial plagiarism. Dozens of pages of material appears in both books, without citation,” reads the letter.

“The impression left to the reader is that many words written by others are those of Dr. Quist-Adade,” it continues.

“Currently, students who purchased these books in good faith might find themselves compounding this violation of academic integrity by citing the words of others as Dr. Quist-Adade’s. In order to protect the reputation of KPU, the Faculty of Arts, and the Department of Sociology, and to prevent further harm against others who have been plagiarised, KPU must retract these textbooks, sooner rather than later.”

KSA Student Rights Coordinator John O’Brian, Policy and Political Affairs Coordinator Jewelles Smith, and Strachan all met with Purvey on Nov. 28 to discuss their findings and recommend that KPU suspend sales of the books and issue refunds to students who had purchased them.

“We presented some information that we had and basically requested that they take the books out of the bookstore and do a refund for students,” says Strachan. “I don’t know how long we’re going to wait to see what they do.”

“It sounded like they were aware of the general issue, like they’d heard concerns about the books. We had a specific list of some passages that we’d highlighted that we gave to her, and I think she hadn’t seen all of those,” says O’Brian.

“When we emailed her for the first time, I didn’t get the impression that she didn’t know who we were talking about or anything. It seemed very much like there’s a situation they’re aware of. Now, what exactly they perceive it as, and how much of the details are they aware of, I don’t know.”

“We asked Sandy first, who said, ‘You should talk to Diane,’” says O’Brian.

“[Purvey’s] initial response was, ‘Maybe you need to talk to [KPU Human Resources],’ and we said, ‘We’d rather talk to you.’”

“We’re not super interested in the kinds of things that HR does usually, so I was assuming that HR wouldn’t be able to tell us anything about academic integrity, which is what we wanted to talk about.”

Shortly afterward, they emailed a press release to students which highlighted their concerns and addressed the meeting with Purvey.

“Her response was that she would bring the concerns to an external complaints process, but that sales may be suspended pending final decision,” reads part of the release.

“Because the citation problems are so extensive and serious, the KSA is confident that a close review of the books will justify a quick recall.”

On Dec. 2, a KPU spokesperson sent an email statement to The Runner addressing the allegations brought forward in the press release and their letter to Purvey.

“An allegation of plagiarism is serious, and the university will undertake an immediate investigation of the claims put forward by the Kwantlen Student Association,” reads the statement.

“In the meantime, the university has temporarily suspended the sale from its bookstores of the textbooks in question, pending the outcome of the investigation. Since our spring semester does not begin until January, this allows the university time to proceed with an investigation prior to the first day of classes. Any students who have already purchased the textbooks from a KPU bookstore can return them to the store for a full refund.”

KPU declined to say whether or not Quist-Adade will be teaching in the spring semester. They also declined to give details about an expected timeline for the investigation.

“We cannot comment further because of privacy legislation,” wrote a KPU spokesperson in an email response on Dec. 3.

On Dec. 4, Quist-Adade sent an email statement sent to The Runner denying the allegations.

“I categorically reject the claim of plagiarism. It is not true, and it is unjustified,” he wrote.

“I duly cited my sources and made the appropriate attributions … I used endnotes to indicate glossary terms I borrowed and/or adapted/paraphrased.”

“I can readily prove I sought permission from publishers or authors to reproduce materials from other publications I used in my own books,” he continued.

“In terms of lecture notes, I rarely cited, since lecture notes are considered common knowledge, and hence do not require citations or attributions.”

On Dec. 5, Quist-Adade wrote a follow up email statement saying “I have not been officially informed that KPU is investigating the KSA complaint.”

“However, it stands to reason that the Institution will investigate any and all allegations made against its members.”

“Several complaints were made by an anonymous party. I categorically reject these complaints as well,” he continued.

“I categorically deny ever committing plagiarism. Ever.”

KPU Sociology Student Association President Nicole Green and KSSA Vice President Tara Hallam met with the KSA on Dec. 5 to discuss the allegations. The two were shown documents comparing allegedly plagiarized passages with the works in which those passages originally appeared, and they posted images of the documents to their Facebook page later that evening.

“It was actually quite shocking to see how apparent it was, and how it hadn’t been caught earlier. I’m very surprised,” says Green.

“Students themselves are held to the highest standards of academic integrity. Expulsion is a very serious risk for any type of plagiarism or citation error, and so when you have a professor who has been caught plagiarizing, it then becomes an issue of whether having him teach at the university is an ethical decision to make for the administration.”

“Dr. Quist-Adade has a wealth of information, and he is a lovely, lovely gentleman, and I think that for a long time, that’s the reason why people didn’t necessarily want to speak of their concerns,” says Hallam, who purchased one of the books this year for a course which listed it as required reading.

“I won’t be using the book again. I can’t use the book again because of academic integrity, so I would absolutely love a refund,” she says.

The KSSA has made a Facebook post inviting its members to submit formal statements about the allegations via email, which they plan to forward to the KSA.

“It is vital that we work collectively to ensure that the KPU administration takes the necessary actions in addressing this serious issue. We are hopeful that the university will adhere to the highest standards of academic integrity in dealing with this matter,” reads the post.

“At this point we want to stand by the KSSA and the sociology department and all of the professors who have worked so hard for our education, and who don’t deserve the runoff negativity that’s happening because of one professor’s poor choices,” says Green.

“No one wants to stand alone against such a large issue, but a lot of students do have concerns that they have voiced either privately or publicly, and so we’re moving forward as a group instead of standing alone on this.”

“We want people to be aware of the fact that [the sociology department] is a great department,” says Hallam. “We do have a lot of academic integrity within the department, and it’s important to us that we take care of this issue so that we can continue to be a strong department.”