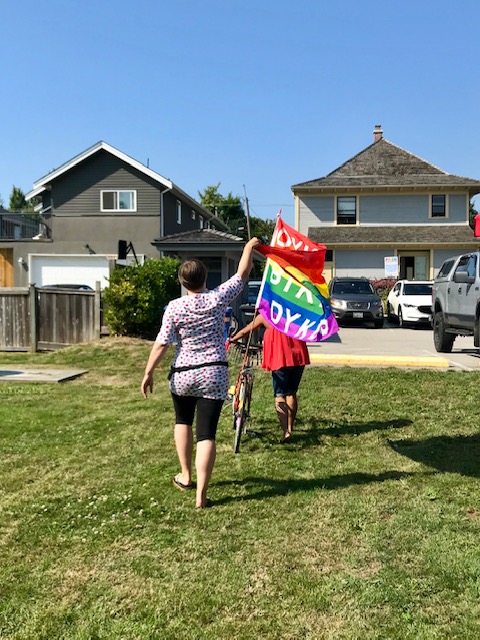 This will be the first of many “Spectrum” columns highlighting LGBTQ+ individuals and their allies in Metro Vancouver, including Surrey, Langley, Cloverdale, and Richmond. If there is a member of the Metro Vancouver LGBTQ+ community you would like to see featured, contact The Runner.

While cities in the Metro Vancouver region have started becoming more inclusive to the LGBTQ+ community as of late, very few have as big—or as public—of a network as the city of Vancouver itself.

However, outside the city, spaces are being created which aim to create safe environments for LGBTQ+ people.

As the fourth largest city in B.C., a large part of Richmond’s population is between the ages of 50 and 54. The Conservative Party made two sizable gains there in the last federal election, and last August, Richmond city staff were called in to remove several posters plastered throughout the city suggesting a correlation between pedophiles and the LGBTQ+ community. However, it was also in this city that Paige Gratland, the former artist in residence at Branscombe House, created a space for LGBTQ+ artists to show their work.

“When I arrived at the Branscombe House, many people told me about the anti-SOGI protests that happened at high schools in 2018,” Gratland wrote in an email to The Runner. “So, in conversation with [Community Cultural Development Manager] Katie Varney and [Richmond Art Gallery Director] Shaun Dacey, the idea for Setting the Table was born.”

Setting the Table was a series of talks, performances, screenings, and “weave-ins” that took place from March to June 2019. According to the Branscombe House website, the series “a showcase of LGBTQ and Two Spirit artists, activists and leaders who present work on intersectional issues and allyship.”

For each session, Gratland led a group activity to help weave a portion of the place setting for the Branscombe House Pride Picnic and Social in August that year. She also focused on subjects such as disability, race, gender identity, and queer and trans spaces in history and popular culture. Lavender Country, a band that many recognize as having produced the first openly gay country album in 1973, played an acoustic set throughout the event.

The idea for the weave-ins was worked out between Gratland and her longtime friend Onya Hogan-Finlay. She says weaving appeals to her due to her tendency to gravitate towards labour-intensive work in her art practice.

“I learned to weave with the patient guidance of the Richmond Weavers and Spinners Guild, and with their help, designed the textiles to specifically fit the picnic table at Branscombe House,” she says.

The place settings were made in collaboration with approximately 200 Richmond residents in 14 sessions, and each participant chose a colour and a board to weave their colour into. This method “references how the first Pride flag was made collectively by Gilbert Baker and 30 members in a community centre in San Francisco,” explains Gratland.

For LGBTQ+ artists and students hoping to show their work, she suggests that they “find the galleries, artist-run centres, festivals, [and] venues in their area that have made it their mission to support the work of LGBTQ+ artists.”

“Then go to these shows. Meet some other artists. Be a part of this larger community,” she says.