KDocs 2020 Explores “Truth in a Post-Truth World” Through Film 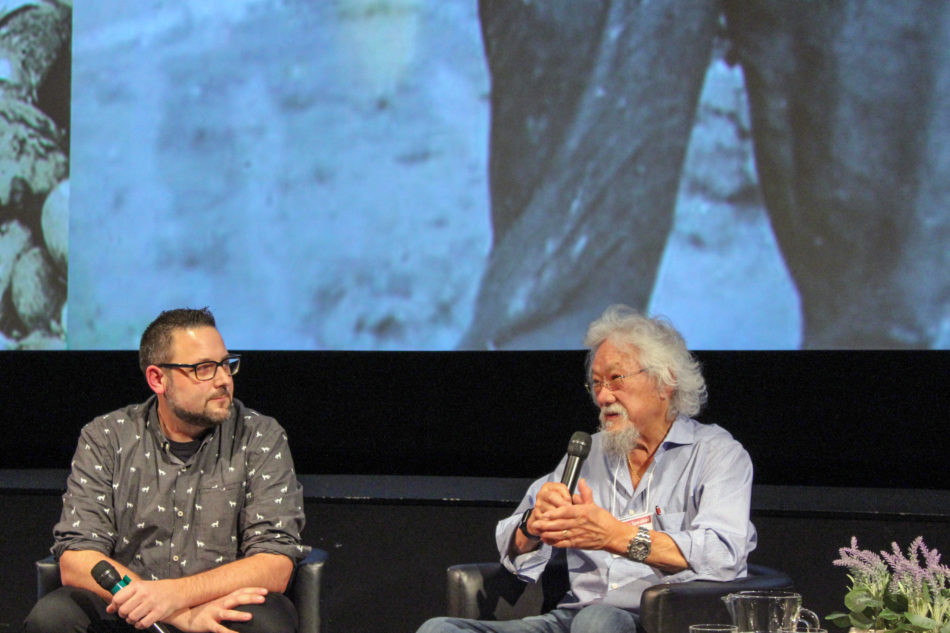 After going on hiatus last year, KDocs came back strong in 2020, with environmentalist and scientist David Suzuki speaking on its opening night.

KDocs is Kwantlen Polytechnic University’s documentary film festival held every year during February. It was founded by KPU instructor Janice Morris in 2012.

With the exception of 2019, the festival is held every year. This year’s four-day event showcased 12 documentaries which focused on a variety of social justice issues like climate change, penitentiary reform, colonization, affordability, and the power dynamics between corporate interests and government. There were also several panel discussions and audience Q&A sessions featuring some of the filmmakers, subjects, and experts.

Before it was even called KDocs, it was a single screening on the KPU Surrey campus. 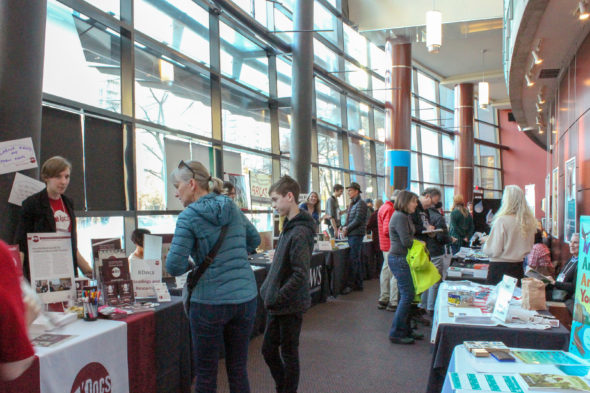 Attendees interacting with the KDocs exhibitors at the 2020 festival. (Nicole Gonzalez Filos)

“The biggest change for our festival has been in growth,” says Morris. “We officially became KDocs in 2014. We had our first festival in 2015. That first festival was just one day, and then we doubled in size every year after that for the next three to four years.”

She says that the goal of the festival is to engage people in dialogue and challenge them to think critically about their own behaviour as well as the impact of human behaviour on a community and global scale. This is part of the reason why the festival puts so much time into organizing panel discussions and keynote addresses.

“There is a lot of research that shows that festivals that grow themselves just for growth’s sake, unfortunately, end up completely folding for many reasons, so growth for growth is certainly not our goal,” says Morris.

The four-day festival featured hand-picked films for attendees to enjoy and analyze.

“We start with over 400 films and then Janice makes this huge excel spreadsheet and we review those documentaries,” says Greg Chan, who is a co-director alongside Morris, director of the community outreach program, and board member with KDocs.

Another project that Chan has worked on for KDocs are workshops which teach high school students how to make their own mini-documentary using their cell phones. 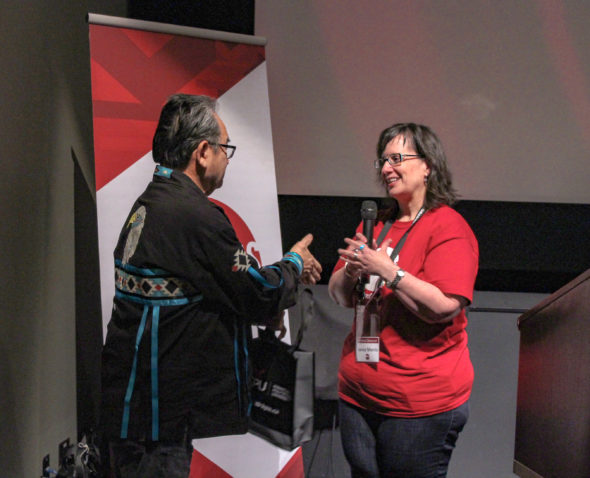 The first two films on opening night were Beyond Climate and Inventing Tomorrow.

Morris says that she and her team chose these films because they tell stories about people “trying to seize their own moment, or their own agency and their own autonomy, and [take] control of their environmental futures.”

Suzuki is in the film Beyond Climate. He is a well-recognized environmentalist, award-winning geneticist and broadcaster, and co-founder of a non-profit environmental organization in his name.

The film showed the environmental impact of climate change on British Columbia over recent years. It demonstrated how climate change negatively affects agriculture and seafood industries, causes areas to alternate between flooding and drought, and contributes to pine beetle population growth.

“When we first made the film — it was like five, six years ago — we were still getting so much denial that climate change was real. That’s why we did it,” says Suzuki.

“Now it seems really out of date because, you know, we had a whole continent burning, right? Australia was on fire. The evidence that climate change is real is overwhelming now … but watching it, I thought, ‘That was a good film for its time.”

Inventing Tomorrow, directed by Laura Nix, features young scientists from Mexico, Indonesia, India, and Hawaii as they attempt to address environmental pollution through their inventions at the Intel International Science and Engineering Fair.

“The moms and dads of every kid have got to be warriors on behalf of the kids,” says Suzuki. “I think they have to get involved in the movement that Greta Thunberg has started and say, ‘Our futures are now at risk.’ If you listen to the scientists, we don’t have a future.”

The festival attracted many curious attendees like Nicole Patricia Green and Shruchi Bhargava, who were new to KDocs.

Green says that she thought the film was both interesting and empowering.

“Especially the way that it was such young kids, it really shows the innovation that youth can bring to science technology [and] environmental change,” she says.

Bhargava, who works in environmental sustainability, was more interested in the panel and Q&A discussions than the films themselves.

“It is always inspiring [to hear] people speak who have been in the field for a long time, especially how they keep that inspiration and optimism kind of going, especially in a field where you hear a lot of negativity,” she says. “The science is not particularly promising or positive.”

“I think it is always good to get a different perspective than your own. To learn something different and always come with an open mind is always exciting,” she continues.

Other films screened at KDocs include Conviction, Toxic Beauty, nîpawistamâsowin: We Will Stand Up, Push, and The Corporate Coup D’etat.

Barbara Morison is a loyal KDocs attendee who shows up every year.

“I think it’s really good to immerse oneself … and then realize how it is important that every little thing you do in your life does matter,” she says.

The film Conviction teaches viewers about the lives of women behind bars and reveals their dreams and aspirations while exploring the failures of the penitentiary system. The film was created with the knowledge that there are more women in prisons now than ever. It was co-directed by Ariella Pahlke, an award-winning documentary filmmaker, media artist, curator, and educator.

Nîpawistamâsowin: We Will Stand Up sheds light on the long history of Canadian colonialism and anti-Indigenous violence, using the murder of Colten Boushie, a young Cree man, as a jumping-off point. The film was directed by Cree filmmaker Tasha Hubbard and follows a family whose goal is to create a safer environment for Indigenous people across Turtle Island.

Push by the award-winning director Fredrik Gertten pinpoints why some people are unable to afford to live in their own cities.

The Corporate Coup D’etat, directed by Emmy-winning filmmaker and journalist Fred Peabody, was the last film of the festival. The film looks at how corporations and capitalist interests in North America have slowly gained power. Its keynote address was delivered by writer and philosopher John Ralston Saul.

Morris says that one of the most enjoyable and challenging parts of hosting the festival is choosing which titles to include.

“All films should stand on their own as films with strong ideas and important topics, and all films need to work together as a group in all of the four days,” she says.

Chan says that KDocs could be a research institute with its own conference and publication in the future.

“We get requests all the time for filmmakers and people on the production side, but also people who studied documentary film and documentary activism are saying, ‘Can we have sessions?’” he says. “You know, those conversations we have in the lobby after the film — to make it like a formal thing where we sit down and do a workshop with the filmmaker or with community activists.”

Alan Davis, President and Vice-Chancellor of KPU, describes KDocs as an accessible and affordable learning opportunity for students.

“All the movies are very carefully chosen,” he says. “They are not movies you are likely to see in regular cinema, and quite often they will have the director or they will have commentators and a discussion, so it is kind of a full experience and you get to meet some very interesting people here.”