Students Walk Out for Wet’suwet’en

They peacefully marched, sang, and prayed in solidarity with Wet’suwet’en land defenders 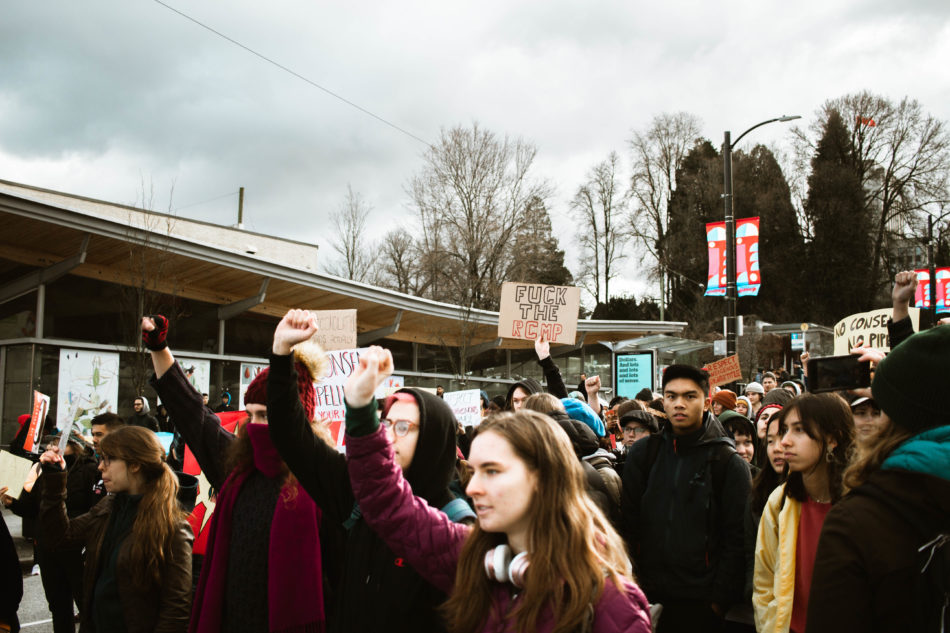 Students Walk Out for Wet’suwet’en. (submitted)

It is estimated that around 600 people marched down Broadway street to Vancouver City Hall in solidarity with the Wet’suwet’en Nation on Jan. 27.

Many university students gathered to protect Wet’suwet’en land from the Coastal GasLink pipeline’s proposed 670-kilometre extension into the nation’s territory.

“We were gathered in a peaceful way and in a prayerful way. We had our drums and our songs, so we were singing songs. We were praying,” he says.

As stated on the walk out’s Facebook event page, on Dec.31, the BC Supreme Court issued an injunction allowing the RCMP to remove Wet’suwet’en people from their traditional territories in northern B.C.

“The Hereditary Chiefs of all five clans of the Wet’suwet’en Nation responded by rejecting the Supreme Court’s injunction. Then the Chiefs evicted Coastal GasLink and their contractors who are attempting to build a liquified natural gas pipeline (LNG) across Wet’suwet’en territory,” reads a post on the Facebook page.

Brittney Appleby, an Emily Carr student, was another organizer of the walk out. She says that many students from her university as well as UBC and Langara participated in the walk out.

“It’s so important to stand up and not be quiet because the government continues to attempt to violently remove Indigenous people from their unceded land in the name of corporate greed and resource extraction,” says Appleby.

Bear says that, even though the walk out was peaceful, there were still police officers present throughout its duration.

“[The police] wouldn’t let anyone use the bathroom at the city hall. There were a few people that needed to use the washroom,” he says. “There were about 20 police [officers] inside of city hall where the doors were. I’m not sure why they had to have so many police.”

Appleby says that Canada has historically been and continues to be violent and racist history towards Indigenous people. She also says that the B.C. government is violating its own provincial laws by trying to build this pipeline.

According to The Guardian, the RCMP “were prepared to shoot Indigenous land defenders” who block the construction of the natural gas pipeline.

“In general, in a lot of Indigenous communities, there is a lot of sensitivity around cops because of the violent history and the current situation,” says Appleby.

She says that, while that the police escorted the group while they marched down Broadway, they “definitely don’t serve the community” that the walk out event aimed to support.

“We are continuing resource extraction,” says Bear. “We do have the technology. There [are] countries that are moving way further than we are in terms of a post-carbon future. But for some reason, Canada just does not want to let that go.”