Activists Block Port of Vancouver in Solidarity with Wet’suwet’en 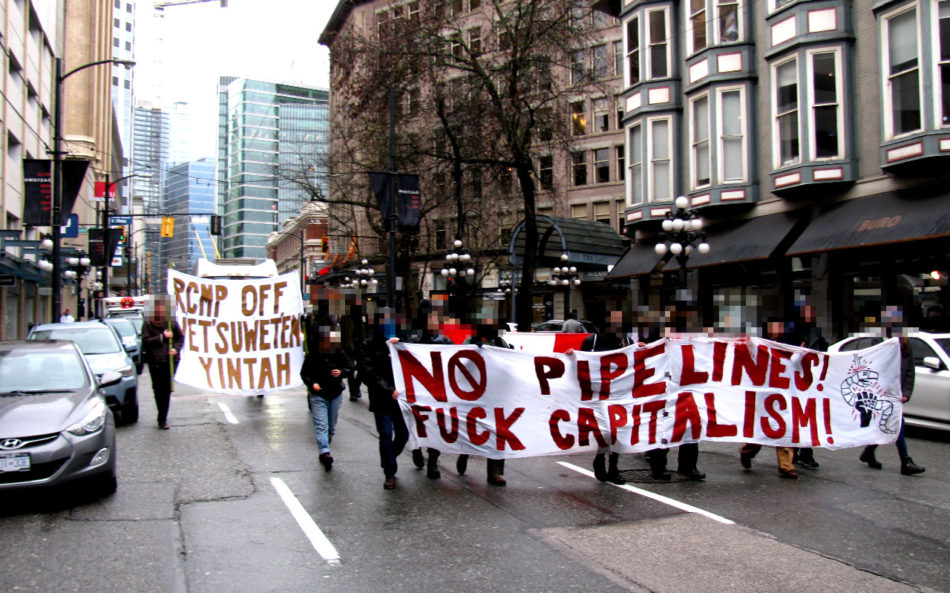 Activists marching to the Coastal Gaslink Offices are blurred to protect their identities. (Submitted)

Editor’s Note: The people quoted in this article chose to use pseudonyms to preserve their privacy.

The Wet’suwet’en people issued a call for action this month, asking allies to show solidarity in their efforts to maintain sovereignty over their territory. As of Jan. 13, the RCMP have set up a blockade in the road to stop media, food and supplies, and Wet’suwet’en people from accessing their own land.

Across the country, Indigenous and non-Indigenous folks are standing up to show their concern over colonial occupation of the unceded territories on which we live, as well as their concern about the continued building of pipelines and the effects of the climate crisis. In Vancouver, a group of activists came together on Jan. 20 to shut down two entrances to the Port of Vancouver by blocking road access with the intention of disrupting the flow of capital.

Mackenzie, who took part in the action, said the port was chosen because the Wet’suwet’en Nation asked for solidarity actions against the infrastructure of commerce in hopes that “we can destabilize a bit of the fake social peace that there is around here, when in reality all we see is social war over poor and Indigenous folks.”

Alex attended the event to “build relationships with people who care about the same things” and see where “the collective movement for those causes is at.” While blocking the port access points and marching along Hastings, the group saw generally positive responses from passersby. People honked and raised their fists in the air, even stopping to give gifts of snacks and coffee as they held the blockade.

“[There are] a lot of people who don’t approve of the state actions but also seemingly don’t know what else to do, and those people tend to be very encouraging and they’re glad to see somebody is out and doing something.”

On social media, the most common reaction other than support was frustration. Some people who were affected by the traffic disruption were upset that their day-to-day lives were interrupted, making them late to work or appointments. Most of the activists agreed that the goal was not to inconvenience people, but they believe that a certain amount of disruption is required when challenging the status quo.

“Whose needs do you prioritize, these commuters or folks who have experienced hundreds of years of violence and occupation?” asks Mackenzie.

After blocking the port access road on Clark and Hastings for a couple hours, the group moved to another entrance on Heatley and Hastings, where they found the road preemptively shut down by the police. Shortly after, they made an impromptu decision to visit the Coastal Gaslink office on Granville Street.

Coastal Gaslink is the company that filed an injunction against the Wet’suwet’en people for denying land access for pipeline construction. Again, the activists found the space evacuated and locked before their arrival, but that didn’t stop them from yelling and slamming their hands against the doors.

“It’s only a matter of time too until inevitably people become disillusioned with the same march and the same pre-orchestrated thing that is pretty happy to police itself and happy to be policed,” says Mackenzie, referencing the climate strikes that have happened around the world this year.

Many of the activists hope that by showing up themselves, they will show others that it’s not that hard to take action for what you believe in.

“It takes so much direct repression before people seem to be capable of responding,” Kaie says. “What I hope is for people to realise they can create these spaces of freedom for themselves to express something about the world around them and about how the social realities are affecting them.”