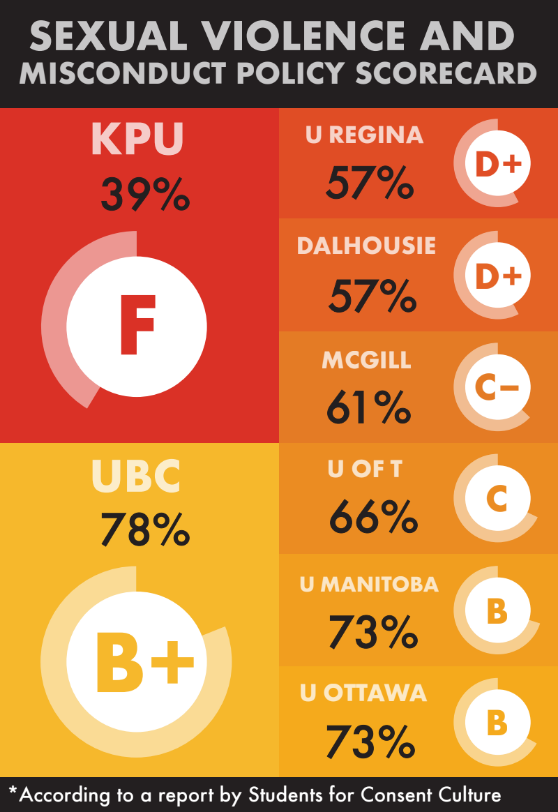 A sexual violence advocacy and activism organization has given KPU a failing grade of 39 per cent on its Sexual Violence and Misconduct Policy.

After publishing their first report on Oct. 11, 2017, Students for Consent Culture created a scorecard called Appendix C for judging the effectiveness of these types of university policies. The document outlines 45 criteria of what should and should not be included in a sexual assault and violence policy for all universities across the country.

Appendix C is part of the OurTurn Action Plan, a resource used to educate about and help end sexual violence at post-secondary institutions.

Also included in the Action Plan is Appendix B: Breakdown of Minimum Standards. The recommended standards for strong policies include mandatory training for those involved in decision making, a right to both criminal and institutional reporting without complaints being suspended, and protections from gag orders. These minimum standards are included in the scorecard.

Kwantlen Student Association Policy and Political Affairs Coordinator Jewelles Smith worked with the KSA, staff, and executives of KPU, and consulted with the SCC to issue a score for KPU’s policy. Afterwards, she found that “it clearly doesn’t have an intersectional lens at this time.”

“One of the places that KPU lost a lot of their scoring is that [the policy is] more than one document. The actual policy is kind of small, and it refers to a procedure which refers to other procedures which fall under different jurisdictions whether you’re staff or you’re a teacher or you’re a student,” Smith says.

The three-page policy document has a “Related Policies & Legislation” section which refers to 20 other university policies including KPU’s eight-page sexual misconduct procedure, collective agreements, and federal and provincial acts.

Bill 23, or the Sexual Violence and Misconduct Policy Act, requires all B.C. post-secondary institutions to establish and maintain policies about sexual assault, sexual harassment, and voyeurism. The bill itself lacks detailed criteria, which has left many universities unsure of what to include.

“It [Appendix C] was the first of its kind, and honestly, largely, it’s still kind of the only of its kind that exists as a way of creating some sort of standard, or an expectation of a standard, that policies and procedures across Canada have,” says Connor Spencer, chair of the SCC.

“About seven days [after Appendix C was published] the Harvey Weinstein story broke. Suddenly, everyone was clamoring to get more information and expertise on sexual violence-related work. We had just happened to create this 40-page resource that was led by student survivors.”

The action plan has been mentioned in the House of Commons, and members of the SCC have participated in eight federal consultations.

The SCC will be publicly posting scores for 14 universities’ policies on their website.

“I think that it’ll be an interesting thing, where then the university can look at the breakdown of the scores. Hopefully then we can meet and talk about where it can be improved,” says Smith.

According to the “One Year Later Report” released on April 3, 2019, a review of 60 campus sexual violence policies using the scorecard yeilded a “national average grade of C- (61 per cent).” Spencer says that “many schools were not happy with how we scored them, including the one that [he] was at when this happened, which is McGill University.”

As well as continuing to grade policies using the scorecard, the SCC plans on creating a report about changes to Canadian policies since the release of the action plan. They’re also interested in creating more resources similar to it, in order to help students as much as they can.

Note: If you experience sexual violence anywhere and feel your health and safety is at risk, call 9-1-1. KPU also has a list of support and services for those affected who want to report or get help on its website.