Peltier, 15, has been a water protector since age eight 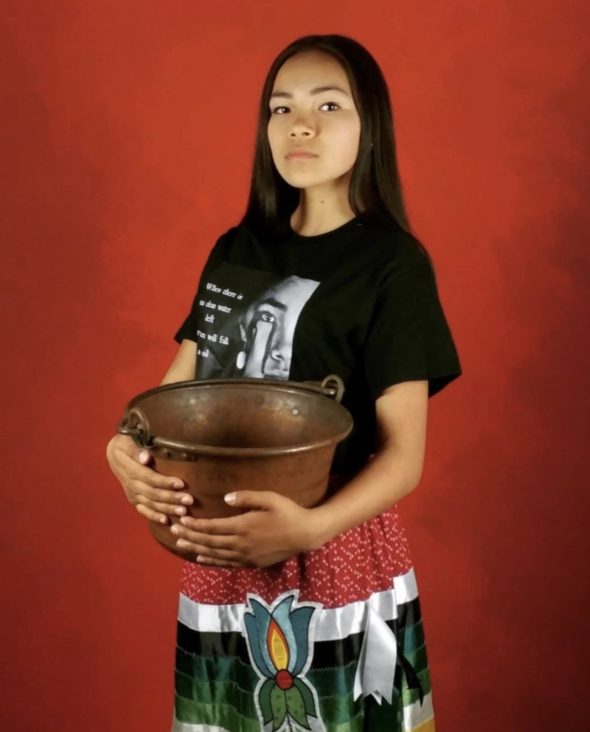 This photo Autumn Peltier was taken by Linda Roy of Irevaphotography, from Wiikwemkoong First Nation. (submitted)

As the Wet’suwet’en solidarity movement continues to grow across Canada, Anishinaabe water warrior Autumn Peltier emphasizes the importance of youth empowering each other to make their voices heard by world leaders.

The young water protector called out global inaction by world leaders on a panel alongside Greta Thunberg and other youth climate activists at the World Economic Forum in January.

From Wiikwemkoong First Nation on Manitoulin Island in Ontario, Peltier began her advocacy journey at the age of eight.

She was inspired by her great aunt, Josephine Mandamin, who was known for walking the shorelines of the Great Lakes to raise awareness about water protection and conservation, as widely reported.

Peltier continues her great aunt’s work as the new Anishinabek Nation Chief Water Commissioner. Her focus is on advocating for clean drinking water in Indigenous communities.

As of February of this year, 61 long-term water advisories are in effect across Canadian Indigenous communities, as reported on the Government of Canada’s website.

These advisories are what inspired Peltier to become an advocate for water, also known as a water warrior.

Though the Liberal government has pledged to eliminate these long-term water advisories by 2021, Peltier has said that more needs to be done.

“When it comes to federal government, it’s really hard to get their attention,” Peltier said on the World Economic Forum panel. “They’re all just focused on money …. It’s almost like they don’t even believe climate change is real.”

But climate change is very real, as reinforced by a University of the Fraser Valley environment professor, Lionel Pandolfo.

“‘Climate change’ is euphemism, almost,” he says. “Because it really refers to the warming of the surface temperature of the planet through accumulation of greenhouse gases in the atmosphere.”

He adds that the term doesn’t account for the alarming speed of global warming. It is now 10 times faster than it has been in the last 800,000 years, the 2018 Intergovernmental Panel on Climate Change report found.

At the World Economic Forum, Peltier said that being awarded for her work isn’t her goal.

“People are awarding me, but I don’t want your awards,” she said. “If you’re going to award me, award me [by] helping me find solutions. Helping me make change.”

The best method of reducing CO2 emissions, Pandolfo says, would be to stop using fossil fuels for energy and transitioning to renewable, cleaner sources like solar, wind, geothermal, and nuclear energy.

With youth environmental activism on the rise, climate change is a scientific issue becoming harder to ignore. Greta Thunberg’s #FridaysForFuture movement has empowered students and supporters to participate in climate strikes globally.

Locally, Vancouver’s Sustainabiliteens participate in school strikes one Friday per month to demonstrate the urgency of addressing climate change to the government.

But action can’t stop there, according to Thunberg.

“The climate and environment are a hot topic right now … but if you see it from another perspective, pretty much nothing has been done,” she said while sitting beside Peltier on the panel. “Global emissions of CO2 have not reduced.”

Melinda Bige, an Indigenous Studies instructor at KPU who is Cree and Dene from Lutsel K’e, acknowledged that having worldwide attention on the issue is a step in the right direction.

“I’m seeing a global reaction,” Bige said during a lecture at KPU. “People are waking up.”

People around the world are standing in solidarity with the Wet’suwet’en people against the RCMP and the proposed route for Coastal GasLink’s pipeline.

Bige KPU likened the strength and force of today’s resistance in Wet’suwet’en territory to the resistance seen during the 1990 Oka Crisis.

“There was resistance predating [the Oka Crisis] but this set the precedence of what we see today,” she said.

Treating the land and the water with respect is central to Peltier’s message, as well as to the messages of many other Indigenous people across Turtle Island.

“Water is an important resource, but it’s also a spirit. She really recognizes that,” Bige said about Peltier’s work. “I’m cheering her on. I cheer on all of our youth who are at the forefront of many of these defence lines.”