From the Editor: The Runner’s Stance on Covering the Wet’suwet’en Solidarity Movement 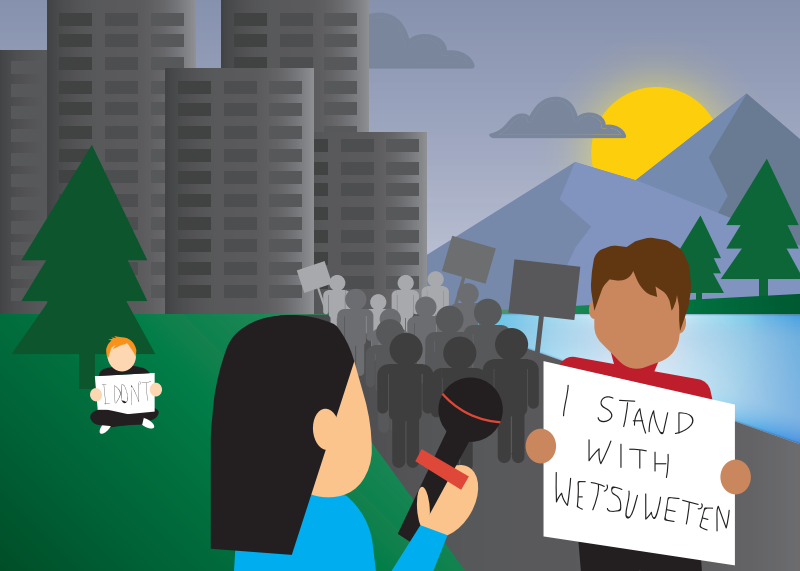 A recent Media Indigena episode by Rick Harp, Kim TallBear, and Candice Callison examined the debate between the media’s use of the term “protectors” versus “protestors” in reference to Indigenous people acting against the Coastal GasLink Pipeline.

The episode opened with commentary about a story titled “War of words: Experts say the Wet’suwet’en actions are being mangled with loaded vocabulary” posted by The Star on Feb. 15. Callison, an associate professor in the School of Journalism at UBC who was quoted in the piece, was quickly met with impassioned responses from both pro and anti-CGL proponents.

One such response came from Rob Shaw, a legislative columnist with the Vancouver Sun.

“I don’t agree that the media should replace the term ‘protester’ with ‘land defender’ and I can’t believe a UBC journalism professor would suggest such a thing,” he tweeted on Feb. 16.

In response, a former Star journalist herself and current freelancer for outlets like CBC and The Tyee, Cherise Seucharan, replied:

“As a UBC J-school grad and current journalist, there’s nothing about the modern newsroom that prevents reporters from considering historical context and our own biases when deciding what words to use. Yes, deadlines are intense, but if we can’t do this we aren’t doing our jobs.”

This debate continues, and in the comments of any article about the Wet’suwet’en solidarity blockades or actions on the territory, you’ll likely see readers riled up over journalistic principles like “bias,” “agendas,”  and “neutrality.”

On Media Indigena, Tallbear explained why she finds this “ridiculous.”

When it comes down to it, while journalists squabble about terminology on social media, peaceful demonstrators are being forcibly detained by the police.

And while editors concern themselves with clinging to the myth of journalistic objectivity, they ironically conceal their own biases from the public under the guise of “neutrality.”

Perhaps they have forgotten that, first and foremost, it is journalism’s place to accurately reflect reality.

The RCMP have been deceitful, untransparent, and reactionary in their treatment of land protectors at the blockades. They, for example, claimed to be leaving Wet’suwet’en territory on Feb. 20 but continue to patrol there, denied reporters access and broadcasting permission on the territory, and allowed an officer to point a gun at an unarmed land protector there.

What is happening there now and what led to this point is relatively clear. Wet’suwet’en land is sovereign — beyond a shadow of doubt, solidified in law via the Delgamuukw v British Columbia ruling of 1997 — and therefore, visitors need to have permission to enter the territory. Coastal GasLink was granted permission by the elected councils to enter to build the pipeline, although most of the hereditary chiefs spoke in opposition to the project. They were denied, so the RCMP sent militarized police to make arrests and occupy the camps there. We are still seeing a continuation of that behaviour today.

Wet’suwet’en land defenders should be referred to as such because they are literally defending their unceded land. If they were not there, that land would be upturned, disrupted, reshaped and damaged by the construction of the CGL. This is an objective fact.

The Ontario Provincial Police arrested 10 people standing in solidarity with Wet’suwet’en in Tyendinaga on Feb. 24, and one person was injured by police during the arrest and had to be hospitalized for treatment. These are objective facts.

Some people want to see the CGL pipeline construction go ahead anyhow, either for economic purposes or because they do not believe that the RCMP is in the wrong. This too is an objective fact.

It is the media’s job to reflect reality, yes, but it is also to be a watchdog. Watchdogs tend to come in handy the most when someone doesn’t want to be watched — so here we are, watching and reporting what we see, even if cops, their bosses, and their supporters tell us to look the other way.

The reason why we refuse to cover anti-Indigenous perspectives in regards to the solidarity blockades is that we refuse to publish hate speech or misinformation — two elements very often present in pro-CGL arguments. As a newspaper, we do not need to cover “the other side of the story” if the other side’s opinion is oppressive, malicious, or ignorant. And if the only way to resolve an argument is by sending armed police to arrest and intimidate Indigenous people putting themselves at risk for their land, loved ones, and beliefs, it is not a fair argument at all. It’s systemic oppression of marginalized people, and oppressors don’t need to have their voices heard more than they already are.

At this point in the pipeline debate, it has become clear that natural resource projects like this can not and should not go on without the express written consent of the people whose land they rely on.

And as for the concern of “having an agenda,” I think Kim Tallbear said it best on Media Indigena.

“Everybody’s got an agenda,” she said. “I just find that such a weak, vacuous critique. I mean, so, working for a news outlet that takes for granted the legitimacy of settler colonialism is like, the hugest agenda in Canada. That’s the agenda.”

If you’re interested in writing a letter to the editor about this issue, feel free to email me at editor@runnermag.ca. Not all submissions are published, but they are all seriously considered by our editorial team.