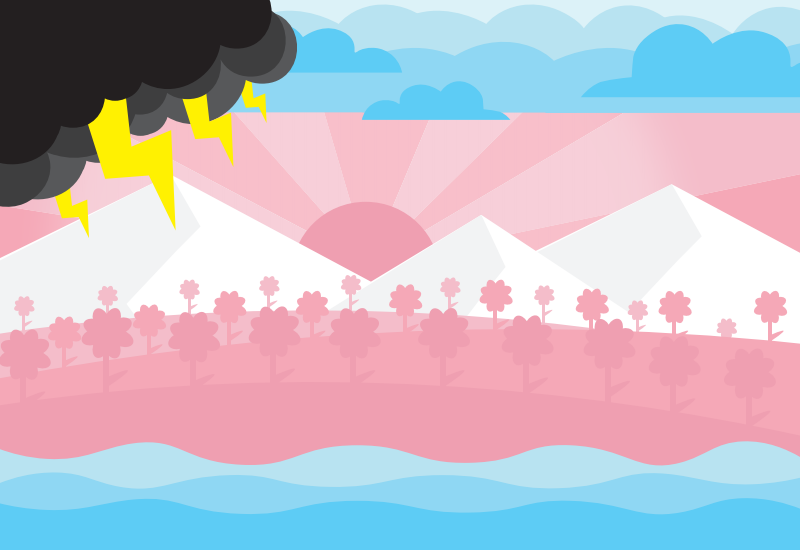 In a world where sexual violence, workplace discrimination, and unequal pay are prevalent issues for women (especially women of colour), feminism is crucial to making positive change. However, with B.C. having seen a 77 per cent rise in anti-LGBTQ hate crimes from 2017 to 2018 we must look to a movement branding itself as “feminism” that has been steadily growing. And unlike true, intersectional feminism, this movement is leaving a devastating impact on the trans community.

On Jan. 27, the Vancouver Public Library announced that a booking request for an event titled “Women’s places & spaces: sports, prisons, and shelters” had been approved for March 21. Among the key speakers for this event, which was originally titled “For females only: sports, spaces, and safety,” is self-proclaimed gender-critical feminist Meghan Murphy, who has referred to transgender women as “males” and suggested that the trans rights movement is a “trend” that is “[pushing] aside” women’s rights.

This, however, is not the first time the VPL has gotten in hot water regarding Murphy’s views on trans women. A similar event, hosted in January of last year, resulted in the VPL being banned from the Vancouver Pride Parade that July, and if the increase in anti-trans sentiments being expressed online as well is any indication, it’s certainly not the last time we’ll hear about this sort of discrimination.

“Part of the problem is … how the library is structured,” says Tami Starlight, a member of the Coalition Against Trans Antagonism. “The board is not very aware of Meghan Murphy’s transphobia and anti-sex work stance, which goes back over a decade, and they refuse to be responsible about that.”

Indeed, in statements released since news of the decision broke, VPL Chief Librarian Christine de Castell has argued that the library is acting in accordance “with the Canadian Charter of Rights and Freedoms, which includes the right to freedom of expression subject only to limits recognized at law.”

The University of British Columbia made a similar argument surrounding the hosting of anti-SOGI speaker Jenn Smith last summer, with provost Andrew Szeri stating that the university was “committed to upholding free speech on campus.” Since then, however, a Freedom of Information request filed by PressProgress revealed that Szeri received 27 emails criticizing the event, with 15 of those emails explicitly warning that the safety of LGBTQ+ students, staff, and faculty would be compromised and nine noting Smith’s connections to various alt-right groups including the Soldiers of Odin. The Chair of UBC’s Board of Governors has since admitted that the university mishandled the event, calling the fallout (which included UBC also being banned from the pride parade) a “black eye” for the university.

So what exactly is “gender-critical feminism” anyway? According to a May 2019 essay for Medium by Ani O’Brien, the central tenet of this ideology is that “women as a biological class are globally oppressed by men as a biological class.” O’Brien argues that it is biological sex “and biological sex alone” that defines women and femininity and that “rather than embrace the feminine man or the masculine woman, gender identity ideology would have them switch place to ‘match’ their gender identity to the ‘appropriate’ sex.”

However, behaviours O’Brien attributes to “the feminine man,” including presenting in a feminine way, fall more under the category of gender nonconformity, which the American Psychiatric Association defines as “behaviours not matching the gender norms or stereotypes of the gender assigned at birth.” The APA also states that such behaviour is not a mental disorder and is not the same thing as gender dysphoria, the markers for which include “a strong desire to be rid of one’s primary and/or secondary sex characteristics” in adolescents and adults, and “a strong rejection of toys, games, and activities typical of one’s assigned gender” in children.

Beliefs like O’Brien’s correlate with a notion that trans people are inferior to cisgender people due to being “in defiance of nature”, which transgender author and critic Jody Norton argues to be an extension of homophobia and misogyny. Writing in a 1997 article for the International Journal of Sexuality and Gender Studies, she says that “the male-to-female transgender incites transphobia through her implicit challenge to the binary division of gender upon which male cultural and political hegemony depends.”

Transfeminist theorist and author Julia Serano would make a similar argument 10 years later in her book Whipping Girl. In it, she says that transphobia is rooted in oppositional sexism, which is rooted in the belief that male and female are “rigid, mutually exclusive categories, each possessing a unique and nonoverlapping set of attributes, aptitudes, abilities, and desires.”

As such, Murphy’s views would not only pose a threat to the entire LGBTQ+ community, as trans activists such as Morgane Oger have plainly stated, but also appear to be in direct conflict with the very definition of feminism.

So far, the only way to dispel the myths and misinformation spread by individuals like Murphy is by centering the voices and experiences of trans people.

Starlight says that they and other members of CATA have been “speaking to folks in the media … although we definitely feel challenged with that because the lack of concern by our media” on these issues.

In fact, in 2017, CBC News published an article from Murphy suggesting that a women-only spa in Toronto would dismiss the concerns of women who have experienced “male violence” by accepting trans women. More of Murphy’s pieces have been published as recently as February of last year, with her recent article for Quillette calling the idea of trans people being more susceptible to violence “highly exaggerated” and claiming that all she has ever done on Twitter is “tell the truth about sex and gender.”

Starlight, however, has refused to give up.

“For me … it’s awareness in the community,” they say. “It’s talking with other people in the trans community about what’s happening to them … how people are affected at work, how it affects their overall health, and other connections to other members of the outer community.”

As for steps businesses in Metro Vancouver could take, Starlight suggests “educating their workers and employers and affirming trans lives whatever chance that they get.”

“We’ve done a little bit of work on Commercial Drive with this. We launched a poster campaign to affirm trans lives in the windows of businesses on the Drive,” says Starlight. “Vancouver Rape Relief was putting their posters in some businesses on the Drive, and we talked to a lot of businesses and they didn’t know the history of Vancouver Rape Relief [refusing to provide support to trans women], and they took their posters down.”