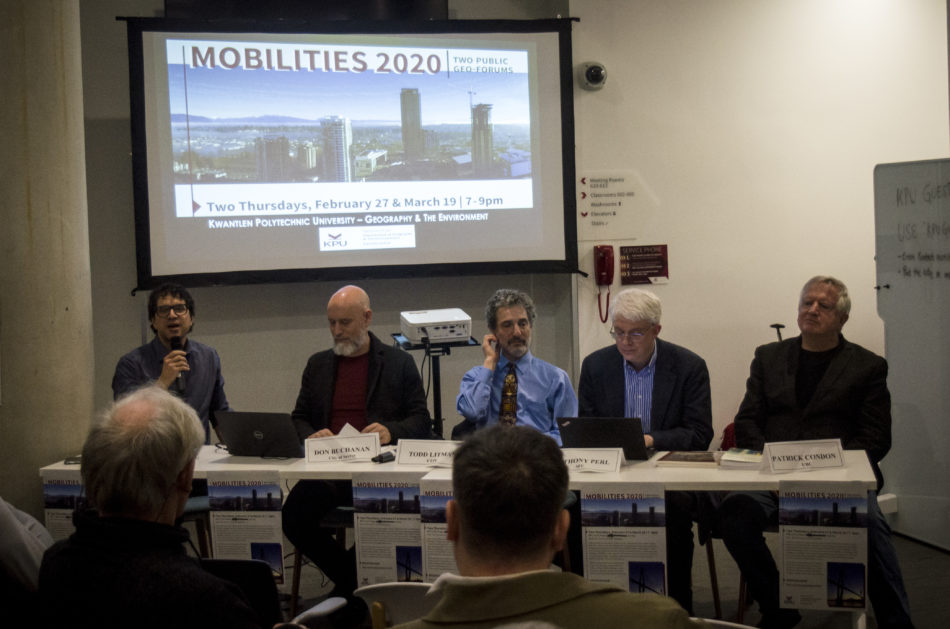 According to 2016 census data, 15 per cent of Surrey’s population, or roughly 77,600 people, use transit to commute to work. As the city grows and its population increases, changes need to be made to transit systems in order to sustain that growth and serve the needs of those who live and work in the region.

What these changes could look like in the future and how people think about travelling is the focus of Mobilities 2020, a panel series being hosted at the KPU’s Civic Plaza campus by the university’s department of geography and the environment.

KPU instructor David Sadoway was the primary organizer for the event. He says that one of his hopes for the forum is to discuss local transit outside of the common debate between whether or not Surrey needs a SkyTrain or an LRT.

“I found it quite divisive. It’s like, ‘We do this or this,’ and it’s a kind of zero-sum game, and my feeling was that we need all kinds of transit, and more, if we’re really to address the problem of Canadian suburbs,” says Sadoway.

They delivered presentations on subjects ranging from the effectiveness of using poeples’ ability to walk to a nearby pub as a way to measure good city planning to a proposal for a low-cost rail system which could theoretically be built across the Lower Mainland.

“There’s enough research to show us that the fastest growth in Canadian cities is not in the core cities so much as in the suburban areas,” says Sadoway.

“How can we not only address these kinds of mobility issues, but [also] link that to other things like housing or air pollution, light pollution, noise pollution? How can making Surrey and South of the Fraser more accessible and improving mobility options — how can that actually make our cities more livable?” he asks.

There will be a second installment of Mobilities 2020 on Mar. 19 from 7:00 pm to 9:00 pm on the sixth floor of the KPU Civic Plaza campus. The event will feature Andy Yan, Director of the City Program at SFU, Managing Director of Walk Metro Vancouver Sandy James, Surrey Manager of Transportation Planner Douglas McLeod, and Stan Leyenhost from Universal Access Design.

Sadoway also feels that “the politics of transit are also really important,” and that, as citizens, “we have to see who’s paying for what.”

“I don’t own a car personally. I get upset that my taxes go towards maintaining and building roads. I understand that we need good roads, I don’t want to see anyone die in a pothole or something like that. But I would rather that my own money goes to transit.”

“It provided a lot of different perspectives on all of the issues facing transportation and urban development, and I really thought my professor had a great idea by bringing out his environmental issues class to observe,” he adds.

McLaughlin came to the panel after learning about it from KPU instructor Paul Richard, who chairs the Environmental Protection Technology Program.

“I’m really happy that it was put on, and I’m happy that KPU had a huge role in putting it on because these are really important issues,” says Richard, who uses one of Litman’s articles in a class he teaches.

“Listening to a panel of experts instead of discussing some readings I put online is probably a better learning experience for students,” he says.