KPU Students Walk Out in Solidarity with Wet’suwet’en 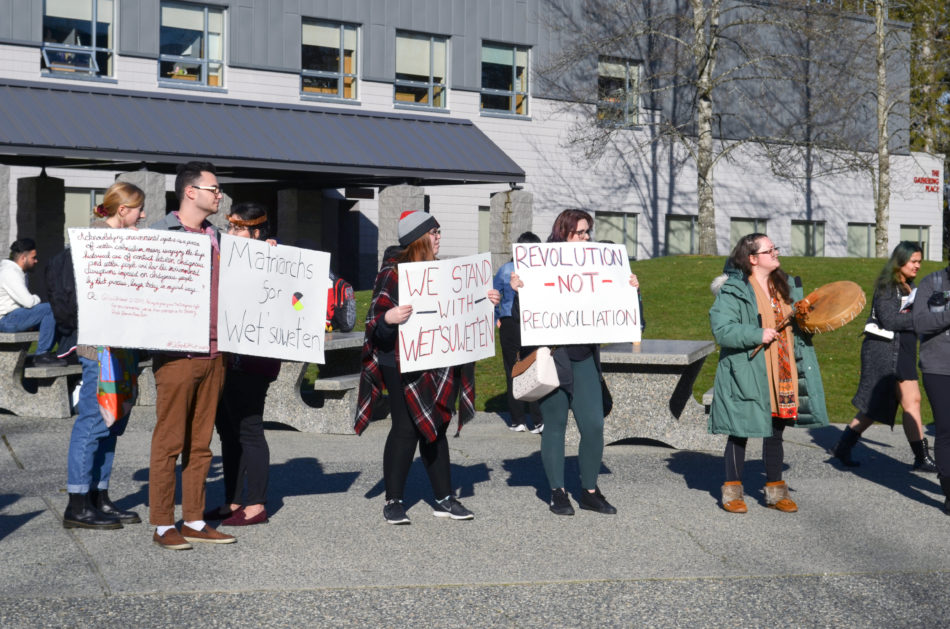 Students got together on the KPU Surrey campus to show support for Wet’suwet’en. (Kristen Frier)

On March 4, KPU students congregated in front of the Surrey campus library after walking out of class in support of the Wet’suwet’en Nation’s fight against the construction of the Coastal GasLink Pipeline, which is planned to cross Wet’suwet’en traditional unceded lands.

The sun was shining as students showed their support, creating a circle where they chanted and sang songs of encouragement.

“What’s poignant about this idea of the circle is that we’re not at the event, but we can still stand in solidarity and create a space where what is happening in relation to the [pipeline] is all existing in that space,” says KPU creative writing instructor Aislinn Hunter, who was present at the walk out.

Thea Copeman-Haynes, a student at KPU majoring in sociology and minoring in Indigenous community justice, was an organizer of the walk out. Copeman-Haynes posted on the Facebook group Kwantlen Book Exchange about the walkout and was met with emotional and critical comments in response.

Copeman-Haynes created a poll in the group to gauge how many people would be willing  to show up to the walk out. She says she was appalled and disheartened by the comments the post received, but remained positive about the turnout in the Surrey courtyard.

Security guards employed by Paladin Security stood by the protest, keeping a watchful eye on the circle.

“This is reconcili-action. This is what it looks like,” said political science major Samantha Jack, who is from Yale and Nuu Chah Nulth First Nation. Jack is also the chair of the Indigenous Student Council and is a student representative on KPU’s board of governors.

Jack says she saw a lot of resistance to the walk out from students. Many questioned if it would make a difference for the Wet’suwet’en hereditary chiefs and their supporters. However, Jack believes that taking the first step and showing up is the best way to make initial change.

“[This] is what gets movements propelled forward: Bodies, voices, unifying together for what is right, and that’s all we’re trying to do here,” said Jack.

As reported by the CBC on March 5, the Supreme Court of B.C. declined to hear from five provincial groups against the construction of the pipeline. These groups include “two First Nations, environmental organizations and young activists.” They argued that a previous judicial review of the pipeline’s re-approval by the federal government was unfairly denied by a single judge from the Federal Court of Appeal in September.

In response, the court ruled that there is no need to approve or deny the project because it is already underway.