This Year’s Homelessness Count May Rise with Unaffordability 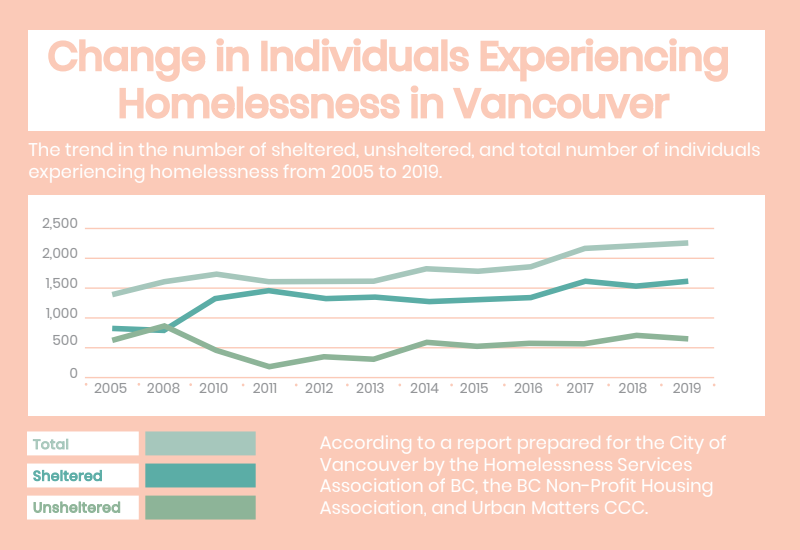 More than 1,200 volunteers conducted the 2020 homeless count in early March, and the count’s project manager says it went “quite smoothly.”

The Metro Vancouver count began on the evening of March 3 with a shelter count which continued until midnight the next day. Afterwards, the fully trained volunteers went around neighbourhoods and shelters to survey individuals who experience homelessness.

Before going out in the field, the volunteers had a two-hour training session during which they learned how to approach individuals respectfully, according to the homeless count project manager, Erika Sager.

“That is part of the role, walking around and looking for people who you think might be included in the count and then introducing yourself and explaining what you are there to do, gaining informed consent, and then walking folks through the survey,” says Sager.

The 2017 homeless count reported that there were 3,605 individuals who self-identified as being homelessness in Metro Vancouver. The 2020 homeless count results are planned to be revealed in April, and the final report will be out in September.

Sager says that when volunteers ask individuals why they are experiencing homelessness, the answer they get most commonly is that rent is too high and that income is too low.

According to a report released in 2017 by the Canada Mortgage and Housing Corporation, the cost of buying a house in the Metro Vancouver region ranged from $400,000 to $1,800,000, and the closer the houses are to the City of Vancouver, the more pricey they are.

According to a 2014 report on the state of homelessness In Canada, affordable housing

“refers to permanent housing that costs less than 30 [per cent] of total household income for low and moderate-income Canadians.”

Staying under this threshold allows people to afford food, clothing, taxes, and transportation.

“I really think the homeless count is really an effective way to raise awareness of this important issue in Metro Vancouver. And I think for individuals who participate in the count, it can be a really meaningful experience,” says Sager.

The City of Vancouver has its own homeless count which it conducts every year. Its 2019 homeless count report, their 13th so far, states that the causes of homelessness vary.

Sagar says they decided to ask individuals about their ethnicity in this year’s survey. This is the first time they have done this, aside from asking individuals if they self-identify as First Nations or having First Nations ancestry.

HeretoHelp is an organization affiliated with the BC Partners for Mental Health and Substance Use Information. In one of their articles, they list the subgroups commonly found in the homeless population.

These subgroups include families, abused women and their families, immigrants and refugees, Indigenous people, and people with severe addictions and/or mental illness.

This year, Sager says many individuals were willing to chat and engage with the volunteers conducting the count.

“It’s just an opportunity to engage with your neighbours and community members that you might not typically spend time with,” she says. “I think that it is a really valuable opportunity to get to know some folks that you see every day but might not talk to.”