A Critical Affair: Down With the Duopoly

As Canada’s news organizations lose money, Facebook and Google are raking in billions from advertising 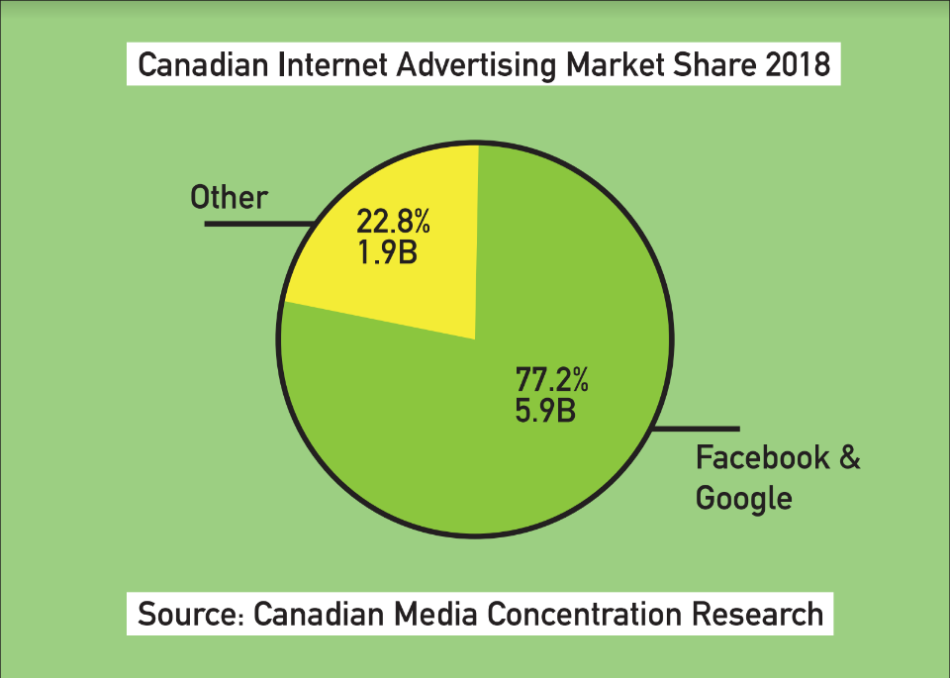 The success and health of news media in Canada is inextricably chained to capitalism. The largest and most recognizable news organizations in this country are all for-profit endeavours which need to make money to survive. If they can’t make things work, they disappear or are bought out by larger companies. In both cases, scores of staff are usually laid off, and communities can lose vital sources of news and information.

Over the last decade, hundreds of news outlets in Canada have had to shut down, and in April one of Canada’s largest news media companies, Postmedia, permanently closed 15 more newspapers in response to the even sharper decline in revenue resulting from the COVID-19 pandemic.

Traditionally, generating advertising revenue was the best way for companies to keep themselves afloat, either through print ads, TV and radio commercials, or online ads. Over the past decade or so, relying on this model for long-term financial stability has become completely untenable for Canadian news companies because the market share for online ad revenue has shrunk, even while online content consumption grows.

According to the The Canadian Media Concentration Research project, Canada’s internet advertising market was worth $7.7 billion in 2018, a value which has continued to increase. With all of that money out there, Canadians may be wondering why Canadian news companies are still shutting down publications due to financial hardship.

The answer is that the market share is being dominated by just two companies: Google and Facebook, who split about 77.2 per cent of the market share, or $5.9 billion. This is because both of these companies can collect data and display ads to online users when they access news content either through a search engine or on social media. They can keep that revenue without having to pay the companies for the work that goes into content creation.

This means that one of the most critical sources of revenue for Canadian news companies has been essentially rendered inaccessible by a duopoly held by international tech giants.

They keep the profit and pass along the cost to news companies, which inevitably trickles down to smaller publications. This has resulted in a disastrous decline in local news coverage across the country which investigators at the Ryerson Journalism Research Centre refer to as “local news poverty.”

As a rule, markets rely on fostering healthy competition in order to incentivize quality and product innovation. Clearly, this is not happening in the realm of online advertising, and this kind of situation is begging for economic regulation. So at what point does the government need to step in? Well, it already has. Sort of.

“To protect the vital role that independent news media play in our democracy and in our communities, we will be introducing measures to help support journalism in Canada,” said Finance Minister Bill Morneau in 2018, right after the government unveiled a plan to distribute $600 million to news organizations across the country.

They’re willing to make someone pay for it, as long as it’s not the two huge tech companies that are causing the problem to begin with.

Other countries are being smarter about this. Both France and Australia have instituted mandatory policies which will require these companies to pay for copyrighted content and share ad revenue, and Canadian news publishers are calling for a similar solution.

Trudeau was asked to respond to this earlier this month, and he said that though the government made an election promise to “bring in measures in coordination with the global community to ensure a better balance,” doing so is not a priority for Canada during the COVID-19 pandemic.

But it really should be. Using COVID-19 to justify inaction on this feels like a sad, low-effort deflection, especially when other countries like France have been demonstrating leadership in this area of policy in the midst of the pandemic.

Now is the best possible time to implement a similar strategy in Canada, and the longer our government delays, the more revenue is being diverted away from the news industry into the pockets of two companies. Two years ago, it was a big enough priority to justify spending $600 million on. Now, despite the fact that the problem is even worse, and despite the fact that people are relying on accessing news online more than ever because of social isolation, the federal government seems to think it’s not as big of a deal.

The money these companies make from online ads in Canada amounts to about 2.8 per cent of their combined total ad revenue, yet asking them to share even a portion of that is apparently too much for the government to handle right now. It’s a huge disappointment.

The Canadian news media ecosystem has desperately needed this for years, and a policy decision like this would yield greater and longer-term benefits than bailouts. Plus, the earlier it can be put in place, the more time we have to make necessary adjustments to address unforeseen consequences, inequities, or problems.

The need for this change is dire, the policy models already exist, and there has been a clear demonstration of prioritization and commitment from the government in the past. There are no excuses left. The Canadian government needs to take the initiative to break up the online advertising duopoly controlled by Google and Facebook, and the sooner they do, the better off we’ll all be.