Vancouver Should Consider the Ward System This Election Season 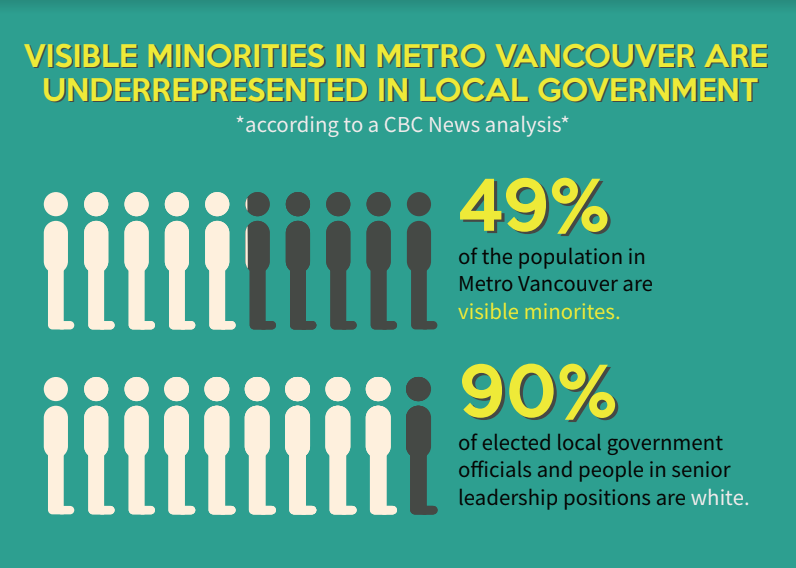 Following a CBC analysis that concluded that approximately 90 per cent of elected municipal officials in Metro Vancouver are white, questions are being raised about what could be done to more accurately represent the voices of 49 per cent of people in the region who identify as non-white minorities. When systems of power like municipal governments fail to include the voices of BIPOC people, it stands to reason that they likely also fail to reflect the perspectives and fully consider the needs of racialized folks in their decision-making, which is intensely and undeniably problematic.

One of the more popular suggestions for how to remedy this stark inequality is to convert Metro Vancouver’s at-large municipal electoral system into a ward system. Ward systems are widely believed to be more conducive to creating city councils which more fairly represent the racial demographics of the city because they require councillors to run in elections confined to their local neighbourhoods rather than city-wide elections. This means that voters are able to support candidates from their own neighbourhood, which they may feel will help when it comes to representing their interests on city council. It ensures that councillors come from places everywhere in the city instead of a smaller number of concentrated regions. Many cities in Canada use the ward system, including Ottawa and Toronto, and research suggests that ward systems can reduce the chances of disproportionate community and racial representation.

For example, Vancouver lists a total of 23 neighbourhoods on the city’s website, all of which are collectively represented by 10 city councillors and the mayor. Even if each of those representatives live in a different neighbourhood, that still leaves 12 neighbourhoods, or 52 per cent of the entire geographic area of the city, without any local representation on council.

Ward systems also increase voter turnout while at-large systems tend to reduce turnout, as Kennedy Stewart himself wrote in his MA thesis at SFU in 1995. The issue of low voter turnout also overlaps with a lack of non-white racial representation at the polls, as shown by the most recent civic election in Vancouver. According to the 2018 election review published last year, “Caucasian Vancouverites are significantly more likely to be voters, while visible minority groups are significantly less likely to be voters.” Despite the city’s efforts to change this through various outreach, funding, and communication and consultation efforts, it’s still a widespread problem.

This isn’t to say that switching to a ward system would guarantee increased racial diversity in municipal government leadership. Only four out of 25 city councillors in Toronto are non-white. Despite the fact that Toronto has had a ward system for over a century, the Ontario provincial government slashed the number of city councillors by nearly half in 2019 before the municipal election, and the people who were elected were mostly white incumbents who many believe were able to use their name recognition to win. This may constitute an example of how this kind of systemic reform can’t do anything to curb the already established political capital and control of the incumbent representatives, which would mean that Vancouver’s city council would look mostly the same as it does now.

Running in a municipal election is difficult and costly, and building public trust and a reputation in governance takes time — time which all of the current councillors have benefitted from, and which hopeful newcomers haven’t. Even if Metro Vancouver were to switch over to a ward system, it could still be an uphill battle for those wanting to change the status quo, including the racial makeup of elected leadership.

And then there’s the process of actually switching over to the new system, which could be an uphill battle in and of itself. Since 1935, when wards were first abolished in Vancouver, there have been multiple referenda proposed which aimed to transition the Metro Vancouver region’s municipality structure to that of a ward system, the most recent of which was in 2004. Obviously, all of them were defeated. These referendum procedures are expensive and politically contentious, and are also daunted by the same turnout issues as municipal elections.

In spite of this, opting to switch to a ward electoral system still sounds like one of the best chances we have to bring about real systemic change to a governance structure which is categorically dominated by white people — which is why it may be worth looking into again.