B.C. Rallies for Justice For Mona Wang After Police Incident 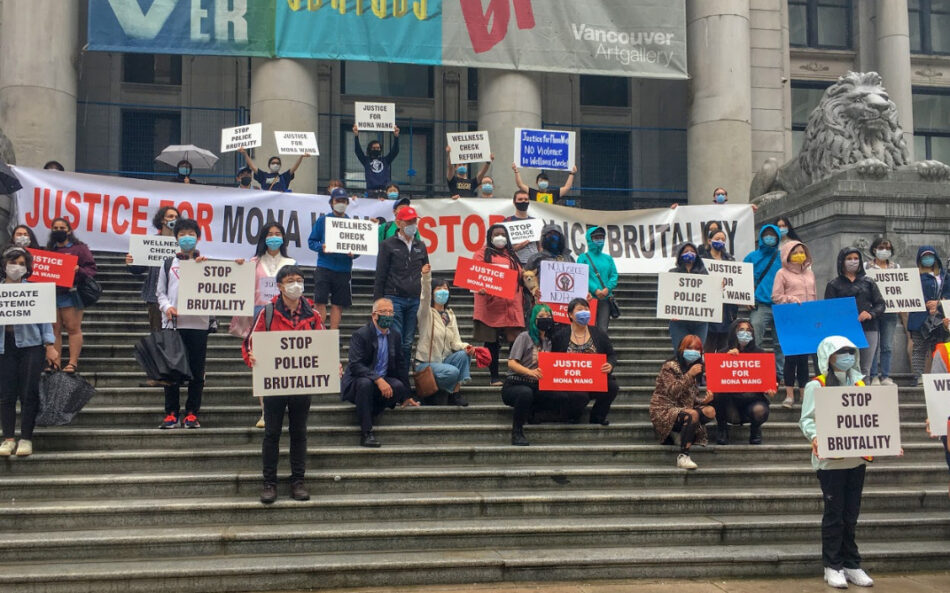 Mona Wang, a UBC Okanagan nursing student who was dragged from her apartment by an RCMP officer, is receiving support from across the Lower Mainland.

The incident occurred on Jan. 20 when RCMP officer Lacy Browning entered Wang’s apartment for a wellness check. Video evidence shows Browning dragging and kicking Wang while she was lying on the floor with her hands cuffed behind her back. Her case has been making its way through the courts since March 26.

“I feel so honoured … to have so many people backing me up,” says Wang. “I was really worried about how the public might see me and if anybody would believe me. Having so many people who are on my side and who want the same justice as I do is honestly so empowering.”

A Justice for Mona Wang petition has been circulating online as well. The petition, which already has over 374,000 signatures, calls for the expulsion of officer Browning and for trained healthcare professionals to carry out wellness checks.

“As a nursing student, we study for about four years on this exact topic … on how to handle patients,” says Wang. “I do definitely believe that police either shouldn’t be going to these calls, or they should definitely be accompanied by someone who … knows how to handle mental health crises.”

Charlie Kerr is a musician who attended and performed at the Vancouver protest. He says the event sparked a lot of hope.

“Of course we are upset that this is happening, but it’s encouraging to see that people care, and especially, people who care for those who are at risk,” he says.

UBCO has a Health and Wellness program which provides access to health clinics, counselling, and special promotions for students.

“We have done a very thorough job on campus as far as developing a culture of caring,” says Roger Wilson, Director of Health and Wellness at UBCO. “I think right from the student body themselves to…the campus administration, we all kind of keep an eye for each other.”

“In our department, we’ll reach [to students] through either email or phone call. From time to time, we will involve campus security if it’s on sight, or the resident managers,” he says. “And sometimes in the community we have to do communal health or the RCMP to do wellness checks.”

Wang says she remembers having to go to Health and Wellness when she was struggling, but she couldn’t get an appointment.

“I asked if it was possible to do weekly counselling, and they said they just [didn’t] have enough staff to do that, especially with the high number of students,” says Wang.

“They could definitely expand or put some more money into some different program that does provide weekly counselling. I think it might be beneficial for some people who might need a little more intensive therapy.”

Wilson says that, in the future, “pairing up RCMP with somebody who is appropriately trained and educated in mental health is probably the best way to go.”