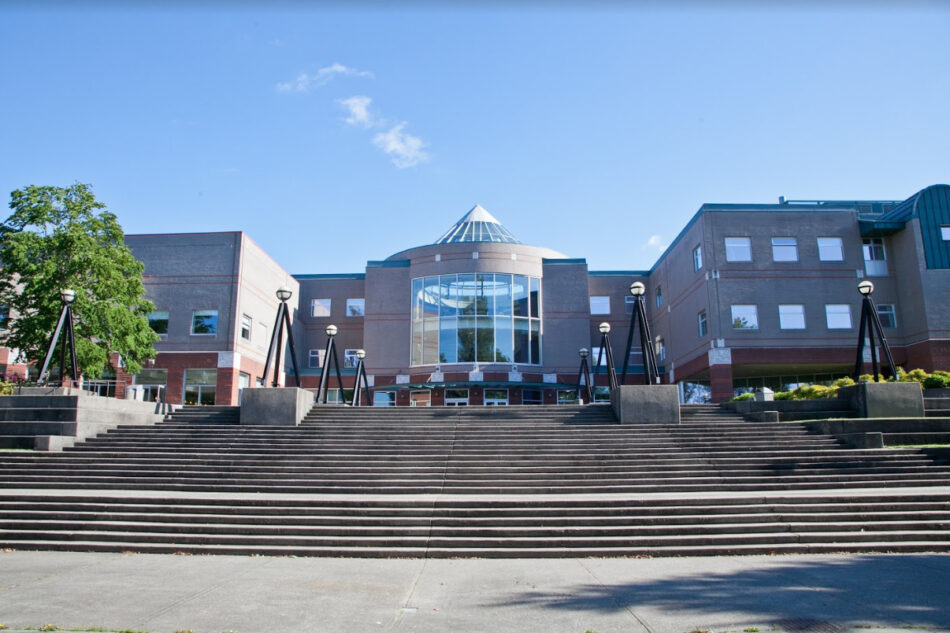 The Traditional Chinese Medicine – Accupuncture Diploma program is based out of KPU’s Richmond campus.(Wikimedia Commons)

A group of students in the Traditional Chinese Medicine – Acupuncture Diploma (TCM-AD) program have submitted a complaint to the B.C. Office of the Ombudsperson, saying that KPU has failed to adequately address concerns that have repeatedly been raised about an instructor who teaches in the program.

The students say they are dissatisfied with the quality of learning provided by TCM-AD instructor Dr. Jay Dhesi, and that they believe he is not sufficiently qualified to teach in the program. They also allege that he resists student feedback and input, and has given out class lecture notes which contain content plagiarized from a number of different websites.

Additionally, the students say they are concerned about a potential conflict of interest in KPU addressing their complaints about Dhesi’s teaching because he is the spouse of Dr. Harjit Dhesi, acting dean of the Faculty of Health.

On July 13, Rick Lin, a student in the TCM-AD program, sent an email on behalf of his cohort to Provost and VP Academic Dr. Sandy Vanderburgh, outlining the concerns they have with Jay Dhesi. The email was signed by 13 of the 14 total students in the cohort, detailing the students’ frustrations with the instructor. The email was also signed by three students from the previous year’s cohort.

“It is obvious that our learning at KPU is heavily dependent on Mr. Dhesi’s teaching. However, his teaching has led us to question his professionalism as a university instructor since the first term,” reads the email.

“We have dedicated the full two years, pay high tuition to study at KPU, hoping that KPU will provide high quality teaching and will train us to be qualified health care providers and professional acupuncturists. Some have quit their job, left their families, or travelled abroad to attend KPU. We do not want our learning to be compromised by Mr. Dhesi,” it continues.

He added that he and his peers were “reluctant to disclose this letter to the instructor involved and the acting dean of the Faculty of Health as they are related.”

Associate VP Academic Dr. David Florkowski replied to the email on July 13, writing, “We didn’t want your email to sit for too long, so I am reaching out to you to discuss in further detail your and your classmates’ concerns in regards to Dr. Jay Dhesi, TCM faculty member. Also [VP Students] Dr. Steve Cardwell is aware that I am contacting you.”

On July 21, Lin emailed Vanderburgh, Florkowski, and Cardwell, raising concerns that Dhesi had been copy and pasting lecture notes from websites without references. He attached an example showing a group of lecture slides where he alleged that 28 out of 34 pages were copied from healthline.com. 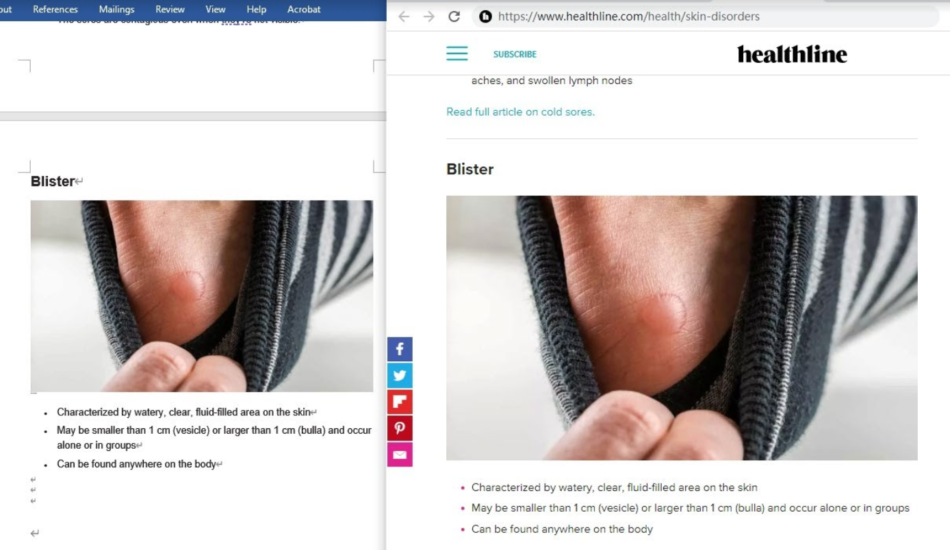 A screenshot comparison of TCM-AD lecture slides and a healthline.com webpage that Rick Lin sent to KPU on July 21. (Submitted)

“As a student, I may not be able to judge Mr. Dhesi’s teaching from a pedagogical perspective. But I have been trained to recognize that word-by-word copying without crediting the sources of information is very wrong,” wrote Lin.

He went on to say that Dhesi was directing students to “self-study” while scheduling 50-70 minute long synchronous learning sessions on BigBlueButton once every three weeks, and refused to provide more learning material when requested by students.

Six days later, on July 27, Lin noticed that Dhesi’s online lecture notes and handouts had been revised to include some citations. He says that students had not been informed of the changes.

This information was included in a third email sent by the students on Aug. 7, along with a statement that they were prepared to boycott registering in any courses taught by Dhesi during the fall semester.

On Aug. 8, the Office of the Provost and VP Academic replied in an emailed statement saying, “From your communications with our office there appears to be the following high-level concerns: Feedback provided by students on course end surveys potentially not being addressed. Selection criteria of faculty to be a faculty member in the TCM program. Faculty member not citing their course resources. Faculty member utilizing asynchronous class sessions and not synchronous class sessions like other TCM faculty.”

“It should be noted here that for all KPU faculty, student course observations for the Spring 2020 semester were not shared with administration. This was the result of the COVID-19 pandemic and the rapid shift faculty were required to make in order to offer their curriculum remotely,” reads the statement.

Additionally, the response reads that the Office of the Provost “has investigated for any potential conflict of interest during the time period presented in your letter.”

“Until mid-February 2020, the faculty member you have mentioned reported to the former Dean of Health, this reporting structure was established at the time of hiring to avoid any potential conflict of interest,” reads the statement, adding that Dhesi “now reports to the Associate Dean of Health.”

“KPU has undertaken appropriate actions in the supervision of our employee and we are satisfied that there has not been a conflict of interest in this regard,” it continues.

In response to questions about Dhesi being qualified to teach in the program, the statement says that faculty are subject to vetting by the TCM-AD chair.

“As the TCM Chair is the expert in their field, the Dean’s office relies heavily on the TCM Chairs [sic] input and recommendations,” reads the statement.

It also says that while faculty members may use outside resources in their teaching, they need to cite what they use in their curricula, and they have been advised of this by the university.

“During any investigation we will determine if the citation of content is required, and if necessary, appropriate recommendations will be made,” it reads.

A copy of the unrevised lecture slides obtained by The Runner yielded a 90 per cent similarity index score on the iThenticate plagiarism detection checker, which calculates the percentage of text in the document that matches other published sources online. 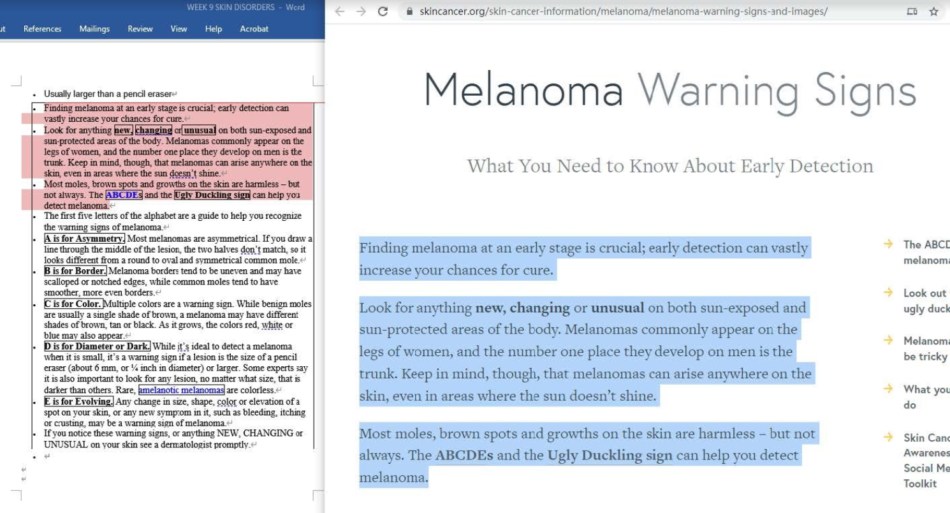 A screenshot comparison of TCM-AD lecture slides and a skincancer.org webpage highlighted by Rick Lin. (Submitted)

The slides appear to contain large sections of text and images which have been directly copied from several websites including skincancer.org, healthline.com, and webmd.com, citing Wikimedia commons. The slides’ text includes copied and pasted web links that say “Share on Pinterest” in small font underneath a number of images.

Two other sets of revised lecture slides obtained by The Runner returned high similarity scores, though they include sections at the end with references to some websites.

On Aug. 20, Florkowski sent an email to Lin and Faculty of Health interim associate dean Sharon Leitch which said that “Dr. Dhesi will remain as the instructor for his courses” even though students requested “a full termination of him being [their] future instructor.”

“I think it’s quite serious,” says Yu, a TCM-AD student who wishes to keep her first name anonymous.

“He always asks us to self-study, to prepare the material by ourselves, to search everything.”

Yu is also one of the signatories of the email sent on July 13, and she says that she and her classmates were asked by Dhesi to create presentations on course material they were studying, which were later posted by the instructor as study preparation materials for a test.

Yu says Dhesi asked students to create lists of questions near the beginning of the semester, which she remembers seeing on a test later on. She recalls having to answer a test question that asked students for the exact distance between two anatomy points, even though they had previously learned that the distance varies from person to person.

When she pointed this out and asked why the question was on the test, she says Dhesi could not provide an answer because he had not written the question himself.

“He can not give me the answer but he just [tells] me, ‘Because you guys create the questions, I only picked the question from the list.’ So it doesn’t make sense, right? If you are the instructor, you are responsible for explaining the question,” she says. “I am really reluctant to study at KPU, but there’s no choice right now.”

Vela Wang, who also signed the cohort’s letter to the provost, says Dhesi “doesn’t really like to accept advice from students.”

“He gives me the feeling that we are against him. From the second and third [semester] I rarely talked to him anymore because I think there is no point in talking to him. There are no results,” says Wang.

Lin agrees with other students’ feelings that Dhesi is dismissive of their concerns.

“Rather than saying, ‘Oh, that’s some advice that can improve how the students learn and help students learn how to understand the material,’ … [he’s] just chopping down their concerns,” Lin says.

A former student in the previous year’s cohort who asked to remain anonymous says that they wrote a letter about Dhesi to TCM-AD Program Chair Dr. John Yang in 2019. It was also signed by other students in the class.

“The letter is quite soft. I was trying to explain to the TCM chair that this instructor’s teaching style is not fit for our class,” they say.

“In one class I was trying to ask a question. I was trying to induce some in-class discussion. He took it very personal. And he told me — in front of everybody — he said ‘if you really want to challenge this, we can talk in private.’”

“I didn’t try to challenge him,” says the former student, “I was just trying to clarify something, and trying to understand it better. So I realized that he doesn’t want anybody to ask any questions. So I said ‘no, I don’t need to talk to you in private.’ And then I just shut up. I never asked any questions in class.”

Although the former student is no longer taking courses with Dhesi, they say they’re concerned that his teaching could impact the program’s reputation and the prospects of future graduates.

“I didn’t think he’s a bad person. I didn’t want to complain about him, actually. I just feel like he’s also a victim here. He has been given this job he doesn’t know how to do. Then he has to plagiarize and he has to refuse to answer questions [from] students,” says the former student.

In response to an interview request, KPU issued a statement that reads, “KPU is committed to maintaining the highest academic standards. In the event of a complaint, KPU follows the appropriate processes and procedures for assessing it. We are not in a position to comment on specific allegations because of privacy legislation.”

Dhesi did not respond to The Runner’s request for an interview.