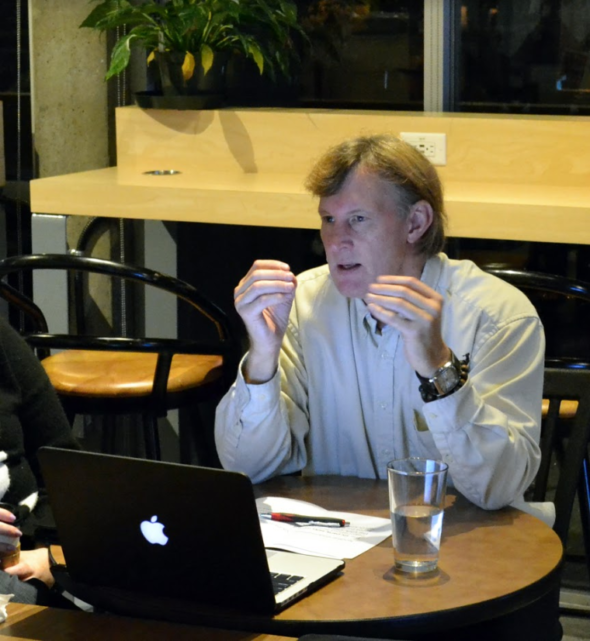 Dr. Ross Michael Pink is a KPU instructor and chair of the Political Science Department. He has authored a number of academic papers and two books, Water Rights in Southeast Asia and India and The Climate Change Crisis Solutions and Adaption for a Planet in Peril. He recently co-wrote an article about climate refugee policy which was published online in The Globe Post.

Over the past few years, Dr. Pink has been active in the KPU community, hosting political discussions with students in the Grassroots Cafe and participating in panels on Canadian politics. This is why The Runner reached out to him for a pre-election Q&A session to get his thoughts on the party leaders, their policies and promises, and how he feels the campaign is going so far.

The following interview has been edited for length and clarity.

What do you think about the provincial government’s decision to call the election early this year?

There was no need to call the election early, and the only reason Horgan did it is — surprise: politics — because the polling said to John Horgan that he could win a majority, and he made up some real kind of deceitful answers when he was pressed on it. In politics, you make these decisions that are calculations, and the opportunity cost of calling the election was better than not calling it. And they did take a bit of a hit. Fifty-eight per cent of B.C. voters opposed the early election call. I think Horgan was surprised, and the party was surprised that they got a bit of blowback from the B.C. electorate, but it’s not enough to hurt them.

So they may not get as a big of a majority, but my assessment is that Horgan will still get a majority.

Do you think the date of the American election factored into the decision to call an early election?

No. I think that Horgan is a good politician. He has good people skills. I have a theory that in politics, you can be successful if you have a high emotional intelligence like Trump has high EQ, Obama has high EQ, John F Kennedy had high EQ and Christie Clark has high EQ. I think that John Horgan has good people skills and he’s likable. You may not agree with all of their policies, but if a politician is likable, they have a bit of that teflon quality.

But I don’t think the American election had any factor in the decision. I think they looked at the numbers, they figured they would get a majority, and they just decided to go for it.

There’s a cliche saying in political science that a year is a lifetime in politics, which means that things can change so rapidly that when there are sunny skies, politicians just go for it. That’s obviously what Horgan and his team decided to do, just go for it, because the skies look sunny right now, politically speaking.

Are there any specific party promises that have caught your attention so far during the campaign?

I think that extending the SkyTrain out to Langley is popular. That’s a big popular decision. I think the $10-a-day daycare promise is popular. For Andrew Wilkinson and the Liberals, the idea of replacing the Massey Tunnel and building a bridge is also very popular. I know a lot of people that live in that area and they’re absolutely frustrated that repeatedly, year after year, they’ve been denied the opportunity to have that. And it’s just gridlocked traffic there basically from 2:30 in the afternoon until 7:00 pm.

Which party’s promises do you think could benefit students the most?

Both the Liberals and NDP have policies that have some benefit for young people, and let’s categorize young people as being between the ages of 18 to 30. For example, if Wilkinson got elected, opening up ICBC to more competition would benefit young people because their auto insurance rates are, some argue, too high.

Also some young people and students have children, so the $10-a-day daycare program would be very attractive.

I’m also looking at what they’re not offering. For example, I believe that there should be more tax credits for students going to school. I think the European model of providing free public education would benefit students, and studies show that when you invest in young people, you invest in society, and you invest in human capital, it’s win-win all the way, and we’re not doing that. I think it’s a big negative that we are not investing in young people and investing in education.

Can you name one thing each party is doing right in their campaign, and one thing they could be doing better?

Let’s start with the NDP. Basically, I think Horgan comes across as very open and inclusive, like he’s got a good style, and that’s important for a political leader. The negative thing is this early election call. I think it’s going to dog him a little bit in the campaign. It’s not going to cost them the election, but I think it may cost them a few seats that they otherwise would’ve gotten.

For the Liberals, I think this policy of opening up ICBC to private insurance is a smart move, but I think that where the Liberals are struggling is that they’re not really connecting to voters. Over the last two years, we rarely heard about Wilkinson, so that’s a big challenge for them. They have a communication deficit that they have to overcome because most people have a very bland overall viewpoint of the Liberals right now. And remember that it used to be the completely opposite case when the party was under Christie Clark, because she was a very dynamic leader.

The Green Party just has to keep pushing their message and be very innovative, because otherwise, they’re not going to get all of the attention that they need. Let’s face it, mainstream media typically favours covering the big parties and finding big headlines, and in the political noise, it’s very difficult for smaller parties to get their message across. The Greens have to be very innovative, very bold, and find ways of capturing the excitement of the voters, particularly young voters.

Are there any specific candidates that you’ve been paying attention to during the campaign?

I’m paying attention to Sonia Furstenau, and I would like to see her increase the seat total of the Greens in the legislature. It’s really important to have a kind of green consciousness and a green dimension in our public policy. I mean, we may not agree with every policy and every member of the Green Party, but as a party generally, they recommend good ideas for the environment and for health and sustainability.

Having written books on climate change and water, I would like to see more Greens elected to the legislature. I think Sonia, who is in the Cowichan area, will likely be re-elected because the island is typically more supportive of the Green Party. The island elected the first Green MP in Canadian history, Elizabeth May, who represented the Victoria area.

Personally, I would also like to see more people of colour and visible minorities elected. And I would like to see more Indigenous people and people with disabilities elected because they reflect part of our diversity and culture. Having more people like that in our legislature — either provincially or federally — is a powerful symbol. This is why we need to encourage participation and maybe make it a little easier for people from these communities and these groups to get involved in politics.

Do you pay attention to any of the more obscure parties? If so, why?

Yeah, I like to keep in touch with some of them. I don’t pay attention to the fringe groups, but the small groups yes, because they are reflecting a point of view which often gets ignored by the media.

You do get these fringe groups like the Rhinoceros party or the Anarchist party, and some of them are running for comic relief. But for other parties that are legitimate but are small, it’s good to pay attention to them because they do reflect a point of view in our political community.

Will you be watching the debates?

Yes, I would like to watch the first debate, of course. Really, it’s all on Wilkinson. There’s a lot of pressure on Wilkinson. If he doesn’t perform well, he might basically resign after the election.

The Liberals have 41 seats, and if you look at the polling, the Liberals are about 10 points behind the NDP. If Wilkinson drops below 32 seats, something like that, or 30 seats, definitely, he’ll probably be leaving the stage politically, and there will be a new leader.

Would you have any thoughts as to who that would be, hypothetically?

With all due respect to Mr. Wilkinson, I’d like to give him a chance to fight a good campaign, to get in the ring so-to-speak, and to share his ideas and then see what happens. You don’t want to prejudge any politician before the election. I don’t think that’s a fair thing to do.

Although, I have heard from people who are traditionally Liberal supporters that there’s been a feeling over the last two years that Mr. Wilkinson is rather low key and he does not really excite the base. Those are issues he really has to work on. He has to be a better communicator.

Do you have any tips for undecided voters to help them decide which party they should vote for?

Voting is really a privilege, and unfortunately, in a comfortable democracy like Canada, we take voting for granted, and polls show that over the past 30 or 40 years, voting has declined every decade, particularly and strikingly among young people. My suggestion is that people take 30 minutes and read the platforms of the three parties: Liberal, NDP, and Green.

It’s really like a public duty. The ancient Greeks believed that the citizen had an obligation to be involved, to be informed, and to be active in the life of their community — and that’s the classical definition of a true democracy, and a true democrat. We don’t always do that, but I think that it’s really important for citizens to take some time, read the major platforms of the parties, and make the decision based on their own values and their own interests.