Misogyny against female journalists must end

We are criticized from our wardrobe to our behaviour, and it needs to stop 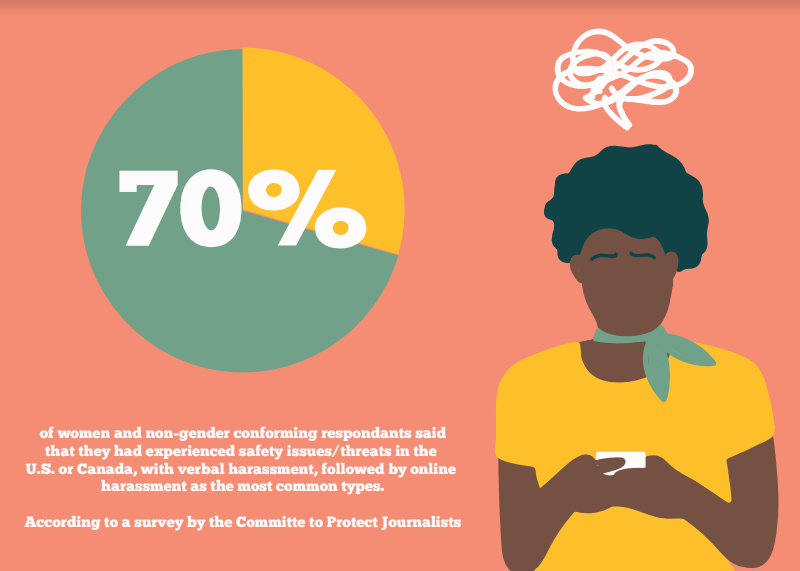 Miranda Fatur is a video journalist with City News Vancouver. On Sept. 24, she shared her story of being sexually harassed by two separate men while shooting a stand-up. One said, “F**k her right in the pussy,” and the second asked, “Want to see the biggest dick you’ve ever seen?”

How did we get here?

Being harassed as a lone woman is terrifying. I have been called every word imaginable. I’ve been told to smile by men who didn’t appreciate my perfect resting bitch face. But as CTV News reporter Annie Bergeron-Oliver once tweeted, “Smiling doesn’t make me better at my job.”

A 2017 study by the Women’s Media Center found that, in U.S. media, “men receive 62 per cent of byline and other credits in print, internet, TV and wire news.” This gender disparity is even greater in TV news, and women face more verbal harassment and threats of rape than men do.

I have never been targeted while working for The Runner or CTV News Vancouver, but I know journalists who have been.

Penny Daflos and Alissa Thibault of CTV News Vancouver recently shared their stories on Twitter. While covering an anti-mask rally, Thibault was called a whore and liar because she works at a news station. “Please don’t do this to reporters,” she said. “We’re just doing our job.”

Daflos shared that someone mansplained an article about the stock market to her, but didn’t realize that she was the reporter who wrote it. She captioned the exchange with: “Being a woman on twitter summarized in one handy image,” and the tweet went viral.

Over in Victoria, Kori Sidaway, an anchor with CHEK News, was messaged by someone who told her, “Too much cleavage can break your news story.” Sidaway shot back on Instagram saying, “I’m taking my power back …. This generation of women doesn’t stand for harassment.”

A survey by the Committee to Protect Journalists found that among female and gender non-conforming respondents, “more than 70 per cent said they had experienced safety issues/threats in the U.S. or Canada, with verbal harassment, followed by online harassment, as the most common types.”

Because these women are on social media — as they have to be in order to survive the changing media landscape — they have no protection from the sexists and trolls who prowl the internet. Harassment is merely a click away.

An Amnesty International report states that “1.1 million abusive and problematic tweets [were] sent to 778 women journalists and politicians in 2017.” And they are likely to struggle to get support as they face these threats.

Women in journalism are expected to be young and attractive, have an hourglass figure and a soothing voice, while her male counterpart can be overweight, balding, and twice her age. I doubt anyone ever told Walter Cronkite to “smile more” or that he wasn’t pretty enough for television.

Female journalists must support each other. We must continue to share our stories, show how rampant sexism and abuse is, and publicly shame those who dare to question our passion and resolve to work in this male-dominated industry.

Only by doing this can we show there are consequences to one’s actions, and despite our journalism degrees and years of experience, we are more than our faces, smiles, and bodies.

As a female journalist, I’m sure a time will come where I’m sexually harassed simply for doing my job. I just hope I can face it bravely, as demonstrated by these women who’ve been strong enough to tell their stories.