Why deplatforming can be a necessary last resort 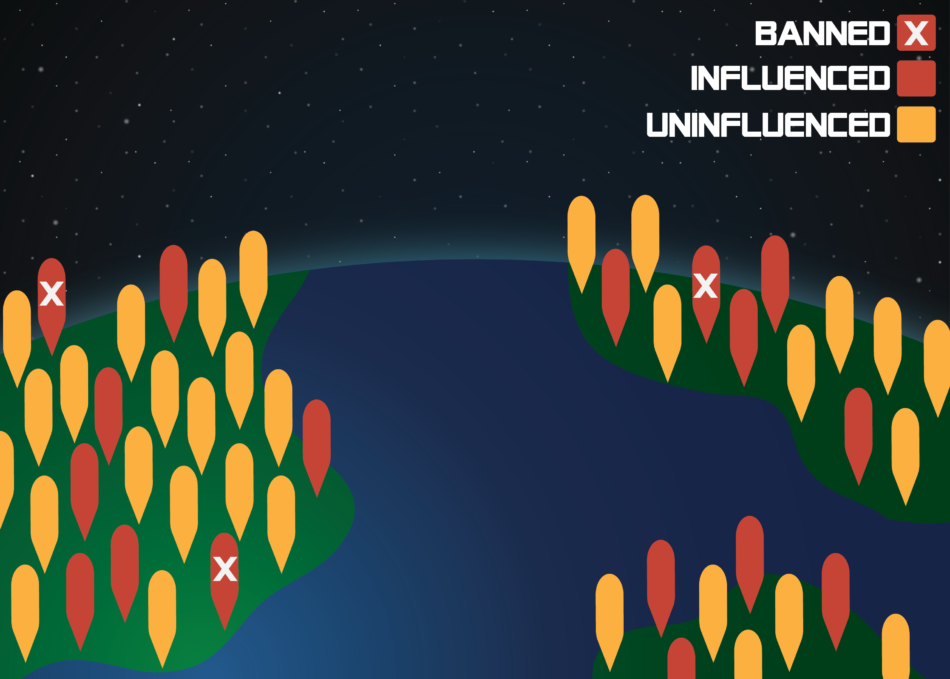 Image is an artistic representation not meant to display accurate statistics. (Kristen Frier)

In 2018, a manager at The Teahouse restaurant in Vancouver was fired after refusing to serve a customer wearing a MAGA hat.

In a public statement justifying the decision, Sequoia Company of Restaurants said they “cannot discriminate against someone based on their support for the current administration in the United States or any other bona fide political party.”

It’s wonderfully ironic that Sequoia used the term “bona fide” to describe a party whose president publicly lied so often that the Toronto Star’s former Washington bureau chief had to turn fact-checking the administration’s false and misleading claims into his full time job.

And according to the manager who was fired, the customer wasn’t refused service because he said he voted for Trump or was wearing a GOP pin, but because he was wearing a specific hat, which has been repeatedly connected to intolerant and hateful ideologies and policies.

Because of this, I believe the manager was in the right. Opposing a symbol and what it stands for is not the same as opposing another person’s ability to support a political belief.

MAGA hats and little elephant pins do not have the same historical narrative, nor do they represent the same collection of ideas. Combining the two gives a set of intolerant ideologies like misogyny, racism, homophobia, and transphobia a semantic smokescreen, allowing them to masquerade as genuine political ideas on par with things like economic policies and the protection of personal rights and liberty.

On the other hand, politicizing intolerant ideas and misinformation can also be used as a way to avoid having to fairly respond to rational counterarguments, which is why hateful ideologies and conspiracy theories often come packaged with anti-intellectualism, or claims that science and academic rigour cannot be trusted. Using evidence-based arguments to disprove conspiracy theories, or using reason to deny justifications for bigotry can then be reframed as a confrontation of someone’s sanctified political views, and a denial of their right to freedom of speech.

Nothing about misinformation or bigotry meaningfully changes when they are presented as political views instead of rational positions — but by attaching them to icons, slogans, and bright red hats, they are made manifest in a way that empowers them, and gives them legitimacy. This empowerment and legitimacy is one reason why political interests need flags, why companies need brands, and why sports teams need logos.

It’s also why they need Twitter accounts, because symbols and ideas need an audience in order to exert influence, whether that’s millions of followers on social media, or a dining room full of customers at The Tea House.

In 2018, U.S. researchers studying the use of #MAGA on Twitter found that mapping the growing network of users who posted it “provided several unique and illustrative instances of both extremist conspiratorial conversational spaces and overtly White supremacist slogans, spaces, and networks.”

The study says that #MAGA “created an organizational space to engage in a global White supremacist discourse, which can be enabled by examining the technological and social affordances within Twitter.”

Providing a platform for the expression of ideas is an implicit acceptance of their validity, and a statement that they deserve as much attention and amplification as any other ideas shared on that platform.

In this space, hatred and lies are presented as equals to respect and truth, when rationally-speaking, almost anyone would agree that they are not. Despite this, people rarely do anything about it, and even when they do, they can face accusations of political suppression like Twitter and the former manager at The Tea House did.

This is part of the “paradox of tolerance” theory coined by Karl Popper, an influential philosopher whose writing contributed to our modern concepts of truth, democracy, scientific philosophy, and how reality corresponds with facts.

In 1945, Popper wrote that if “we extend unlimited tolerance even to those who are intolerant, if we are not prepared to defend a tolerant society against the onslaught of the intolerant, then the tolerant will be destroyed, and tolerance with them.”

He supported suppressing intolerant philosophies as a last resort, “…for it may easily turn out that they are not prepared to meet us on the level of rational argument, but begin by denouncing all argument; they may forbid their followers to listen to rational argument, because it is deceptive, and teach them to answer arguments by the use of their fists or pistols.”

This once-hypothetical scenario became a reality when Trump’s supporters — many of whom were proudly wearing MAGA hats — fought their way into the U.S. capitol, and killed five people.

Twitter’s decision to deplatform those who work to spread intolerance or misinformation is a way of stopping that from happening again. It’s a necessary last resort, when rational discourse becomes impossible, when hate suppresses reason, and when logic and mutual understanding of facts and truth are being undermined and disregarded.