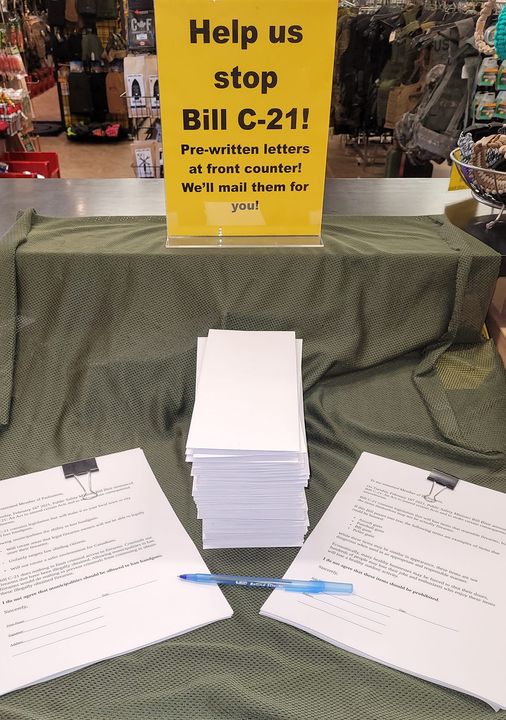 Poco Military has pre-written letters for customers and community members to sign for the store to send to MPs in B.C. (Submitted)

Canada’s airsoft community is calling on the government to reverse the proposed federal gun bill, which members say will cause a ban on the sport entirely.

Bill C-21 is currently being debated in the House of Commons. Federal Minister of Public Safety Bill Blair said its goal is to “end the proliferation, importation, export or sale of those replica firearms that exactly resemble regulated firearms and discharge projectiles at a dangerous velocity” in an emailed statement to CBC.

“Airsoft replicas aren’t really allowed to shoot over 500 feet per second because they would technically be deemed a firearm at that point,” says Daniel Gustowski, Manitoba airsoft representative and co-owner of Hop-Up Heroes Airsoft Field. “Any replica that replicates a real firearm that shoots over 500 feet per second would be deemed prohibited, and that’s almost 99 per cent of the airsoft guns — or toys I should call them, that we use.”

Gustowski represents Manitoba in the national effort to fight Bill C-21, concerned the bill will cost businesses or shut them down entirely and disband a community.

Airsoft is a simulated combat game played in small groups, or large weekend events before the pandemic, similar to paintball, and is often played at paintball fields. Players wear protection, like goggles, and shoot small plastic biodegradable pellets at each other.

At the second reading of the bill on Feb. 26, Blair said replica firearms make it difficult for police to distinguish a replica from a real gun, but that the bill isn’t about “BB guns, paintball guns, and pellet guns that people use recreationally, it’s about devices that are designed to appear as exact replicas of dangerous firearms.”

But the section of the bill that ensures mid-velocity ‘replica’ firearms are “prohibited for purposes of import, export, sale and transfer” includes airsoft guns. Many airsoft guns, which are toy guns that shoot plastic BBs, are made to look like real firearms.

If the bill is passed as it’s written, Gustowski says it would end hundreds of local and small businesses across Canada.

“We started selling airsoft in 2010, and the interest was pretty good because we also sell other stuff like vests and boots and camouflage gear as well,” says Matt Baker, owner of the army and navy surplus store Poco Military in Langley. “There’s quite a bit of crossover with other things we have, so if we lose airsoft, we [wouldn’t] just lose airsoft itself.”

The most common solution in some countries, including the United States, is to mandate that bright orange tips be fitted over the muzzle of the airsoft gun.

“Other countries have gone through the same thing, and we can piggyback off their already established ways of doing that,” Gustowski says.

“We could mandate off-coloured mags … like all mags have to be white or have an orange stripe on them. It wouldn’t add too much to the cost, it would be easy for the importers to do, and definitely mark them as toys,” Baker says.

Poco Military has set up a stand of pre-written letters for customers and community members to sign, which the store will send to MPs in B.C. to urge them to advocate for the airsoft community.

“The way they worded it makes it seem they don’t understand what airsoft is or what the impact is,” Baker says. “We felt we had to do something, give our customers the option to speak up… and be part of the solution to save this hobby.”

“A lot of people have used airsoft to break out of their shell, their social anxiety, they’re concerned about what they will do after this,” Gustowski says. “I can only speak for my own battle of depression and how much airsoft has helped me in that… but they’re very concerned, they don’t want this sport taken away from them.”

Conservative MP for the Simcoe-Grey riding Terry Dowdall is representing a petition to the Government of Canada on behalf of the airsoft community. The petition closes on Mar. 26 before it will be presented to the government.