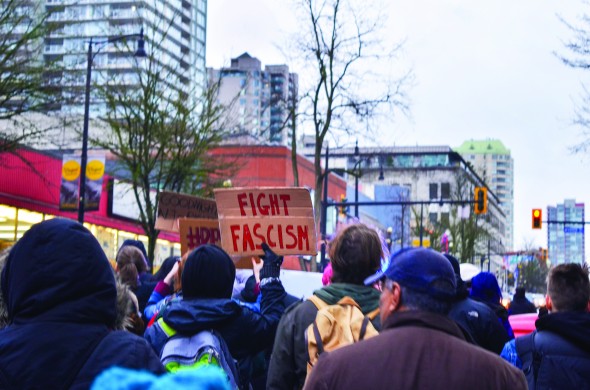 An anti-fascism rally was held in front of the New Westminster Skytrain station on Sunday, Jan. 29. The rally was staged in response to two pro-Nazi flyers that were found posted at bus stops near the station, as well as the circulation of Ku Klux Klan flyers in Abbotsford and Chilliwack and racist posters found on people’s doorsteps in Richmond.

The rally was organized by The Coalition Against Bigotry, an organization created and directed by Imtiaz Popat, who led about 100 protesters in a peaceful march from New Westminster Station to Columbia Station after delivering an opening address condemning the recent increases in activity related to neo-Nazism. In a Georgia Straight article published on Jan. 29, Popat was quoted as saying, “We want to build a coalition against this kind of hate that is against women, against people of colour, against gays and lesbians, because this is what they are about.”

The march was preceded by a police escort and lasted for about 30 minutes, during which protesters, some clad in face-masks in order to protect their identities, displayed homemade signs and chanted, “Hey-hey, ho-ho, neo-Nazis got to go.”

Ari Mansell and Jacob Gold were two protesters that marched together during the event.

“We’re just making sure everyone is safe and is able to demonstrate safely. We’re speaking out against the Nazism that’s been demonstrated in New Westminster and Vancouver and Surrey and Richmond,” says Mansell. “It’s not cool here in Canada, at all.”

“This is my first rally in my entire life,” says Gold, “and I wanted to come and show support.”

“I come from Jewish descent and being against Nazism is something that I’m very passionate about,” Gold continues. “There are too [many] people on this planet who say they want to make a difference, but then don’t go out and do it, and at the last second when everything is going bad they say, ‘Why didn’t someone make a difference?’ I’m one of those people who wants to make a difference in the moment.”

Both Mansell and Gold wore facemasks and declined to have their photograph taken, saying they were concerned about being targeted by members of neo-Nazi affiliated groups, specifically mentioning the Aryan Brotherhood and the Soldiers of Odin.

“Basically, we’ve been seeing lots of neo-Nazi propaganda pop up all around—posters, all that fun stuff,” says Art, another mask-wearing demonstrator who chose not to reveal his last name. “Today was really just about a group of people, minorities and all of that, standing up against them and saying that what they’re doing is wrong and that they won’t be able to suppress us.”

During the march, Art displayed a banner representing the Vancouver Antifa, an organization that organises rallies intended to oppose fascism and bigotry.

“These are people that I support fully,” he says. “As a young queer person who has been around skinheads a surprising amount of my life, I know that they are horrible people, and I will do anything to stand up against them.”