“It was just like it is today,” says Goldie Springenatic, owner since 1959 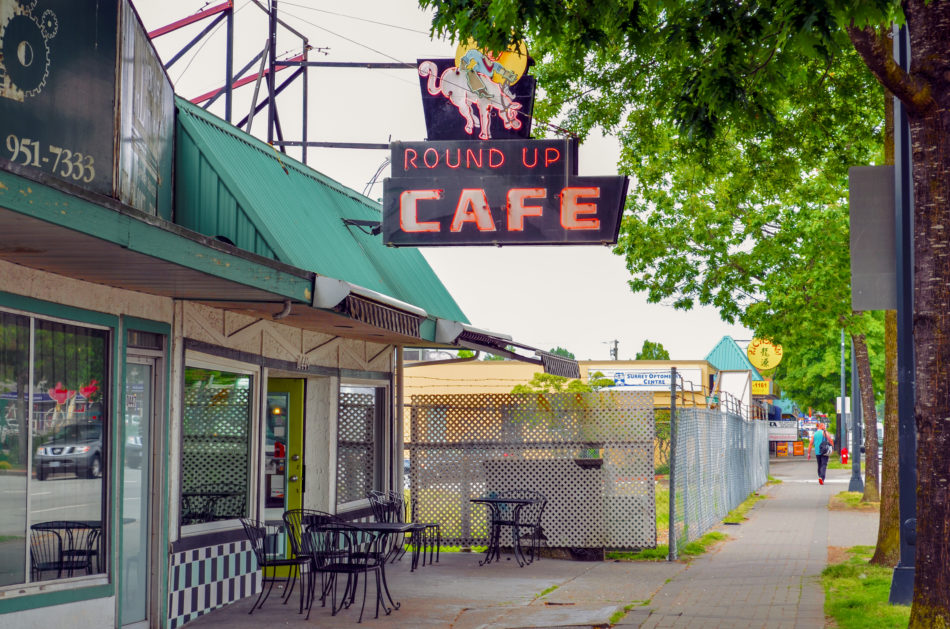 Round Up Cafe’s neon sign which hangs over the sidewalk features a cowboy on a bucking bronco. (Kristen Frier)

Located only steps away from the new KPU Civic Plaza campus, Surrey Central’s Round-Up Cafe has kept the community well-fed since 1949. For most of its life, the restaurant has been owned and operated by Goldie Springenatic, who purchased it with her late husband Orest in 1959.

“[Our menu] hasn’t changed in all those years,” says Goldie. 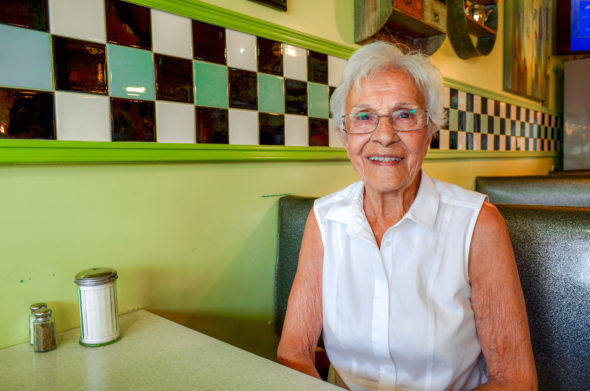 Goldie Springenatic has owned the Round-Up Cafe since 1959. (Kristen Frier)

Stepping into the Round-Up feels like walking backwards through time. Between the 1940s-50s decor, the bright neon sign outside, and Goldie—the hostess with the most-ess—Round-Up provides the perfect side order to quality libations: authenticity.

Round-Up still has its original sign which hangs over the sidewalk, accented by a cowboy riding on top of a bucking bronco. Both the name of the restaurant and the vintage signage are indicative of the idealized western culture that was portrayed by Hollywood in the 40s and 50s.

While the cafe may not have changed drastically in the last 60 years, the City of Surrey sure has.

“There were blueberry bushes around here in the old days,” says Goldie. “Now there are high rises.”

Surrey Central, formerly known as Whalley and formerly formerly known as Whalley’s Corner, was named after the first gas station built in 1925 outside of Vancouver’s “original downtown,” New Westminster. Due to Surrey’s proximity to New West, the completion of the highways connecting the two cities, and the significantly lower lot prices on our side of the Fraser River, the locale became a rapidly developing area in need of a good eatery.

Round-Up was originally open 24-hours a day. After 30 years of splitting shifts to make it through the night, Goldie and her husband decided to start closing at 5:00 pm.

Still, 60 years on the grind has made Goldie truly value hard work. To this day she still works up to five days a week, lending the staff a hand and graciously greeting customers.

Her husband Orest used to keep a baseball bat behind the counter to chase away problematic folks. He was, after all, a little league coach in Whalley and a massively influential figure in the Surrey baseball community.

Thankfully, Goldie says that issues with customers have been fewer and further between since then.

“[Our customers] seem to respect us these days,” she says. “People like to come here to support the small business.”

KPU students, especially those who will be taking classes at the nearby Civic Plaza campus, can support a local shop, share in a slice of Surrey’s history, and have a fantastic meal all in one go at the Round-Up Cafe.