How the Canadian government plans to drastically reduce plastic waste, and what KPU is doing to help 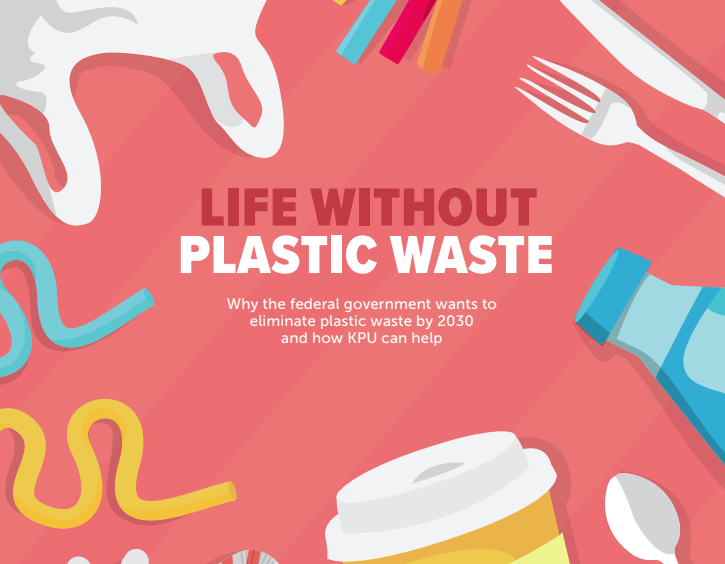 Most people agree that, ideally, single-use plastics should be disposed of in ways that limit their impact on the environment. Plastic recycling—which uses broken-down components of certain plastic products to create new goods instead of sending them to a landfill—is the most popular method for doing this, but it’s still not being used commonly enough to diminish the threat that single-use plastics pose to slowing climate change.

A study conducted by Deloitte and Cheminfo Services Inc., which was submitted to Environment and Climate Change Canada in March, estimates that 3.3 million tonnes of plastic waste had been produced in Canada in 2016.

These findings were used to inform a report chaired by Cloverdale-Langley City MP John Aldag called The Last Straw: Turning the Tide on Plastic Pollution in Canada. The report was presented to Parliament by the Standing Committee on Environment and Sustainable Development, and it contains a number of recommendations for how to reduce plastic pollution with the ultimate goal of eliminating all plastic waste in Canada by 2030.

The report acknowledges that plastic litter “harms and kills wildlife, and microplastics are inadvertently consumed by people through seafood, drinking water and sea salt.” To combat this, the committee’s recommendations include a full ban on harmful single-use plastics, a requirement that certain plastics be scientifically studied and added to the “List of Toxic Substances” referred to in the Canadian Environmental Protection Act, and that a mandate for plastic recycling procedures be standardized across the country.

The committee also recommends that fossil fuel subsidies for manufacturing plastic be eliminated in order to ensure that recycling has better economic viability, that plastic goods made and sold in Canada contain 50 per cent recycled materials, and that labels on plastic products be more detailed.

The Harm Caused by Single-Use Plastics

It is important to note that, though many single-use plastics can cause environmental damage through improper disposal, there are some sustainable benefits from using them as well. For example, the report indicates that it is more energy-efficient to produce plastic packaging than glass, metal, or paper alternatives. Plastic packaging used for food also reduces the amount of waste from spoilage. For example, plastic packaging can extend the shelf life of grapes from 7 days to 70, ground beef from 3 days to 20, and Provolone cheese from 190 days to 280. All of this contributes to a reduction in greenhouse gas emissions.

“Not all plastics are equally bad or equally good, so to speak,” says KPU instructor Dr. Paul Richard, who chairs the Environmental Protection Technology program.

One of the courses Richard teaches focuses on solid waste management, including plastic disposal.

“If you’re going to have plastics, it should be disposed of [in a way] where it is used, and to me, the best way to do that would be to use the plastic as a pseudo-fuel,” he says.

“Either have a high-tech system that turns it into actual fuel—and we aren’t there yet—or simply burn it in a good incinerator. I know it sounds like an oxymoron, ‘a good incinerator’, but it does have its place, and it definitely does destroy the plastic.”

One example of these types of incinerators is Covanta Burnaby, a waste-to-energy facility which converts post-recycled waste into steam energy to be fed into the power grid. The facility opened in South Burnaby in 1988 and processes about 850 tonnes of waste per day, which includes 25 per cent of Metro Vancouver’s annually produced post-recycled waste. While this lowers air pollution and reduces greenhouse gas emissions from other means of energy production, it cannot reduce the impact of improperly disposed plastics.

“To me it’s not so much the air pollution that’s the big issue with plastic. It’s the contamination of water and the oceans and ocean life, because of what plastics end up doing to fish, seabirds, turtles, and marine mammals,” says Richard.

“For some plastic resins, there’s a risk involved because they are slightly porous and they will absorb a lot of organic material, and that includes pesticides. It’s part of the problem where you get all of the plastics floating around in the ocean. They turn into smaller and smaller bits, but they also aggregate and work as a magnet, so to speak, for all of the toxins that are oil-based—and there are lots of them.”

When animals swallow plastic items, they are often unable to digest them fully, and the plastic takes up room in their stomachs and digestive tracts.

“Some animals are found starved with a full stomach and they couldn’t digest or excrete the plastic. The other problem is that some of the plastics break down to the size of cellular algae. They tend to concentrate chlorinated organics like pesticides and release them once they are in the digestive tract of the animal,” says Richard.

In these ways, littered plastic causes harm to animal populations which threatens the stability of marine and land ecosystems and fisheries across the globe. This, along with many other reasons, is why many people feel that it is important to change the way we use and treat plastic. Canadians have started to become more conscientious about plastic disposal, and larger organizations and institutions are taking steps to help the cause.

The most common single-use plastic items found at KPU include plastic cutlery, plastic lids for coffee cups, plastic packaging for food-items including bottles from vending machines, and plastic bags and packaging on items sold by the bookstores. These materials arrive in periodic deliveries and are distributed across campus before being used by students, staff, and faculty. The majority of them are then disposed of after being used once.

KPU has implemented a multi-bin policy in order to help sort recyclable materials and organic materials. Hopefully, this will reduce the amount of non-decomposable waste being sent to the landfill.

Iain Hunter, Director of Maintenance and Operations at KPU, says that the university is continuing to look into how it can improve its commitment to sustainability.

“KPU is constantly evaluating its waste streams to look for opportunities to continue advancing the rate at which waste is diverted into other streams,” he wrote in an email to The Runner. “We’ve been working closely with our partners across the university on plans to create more user-friendly collection sites and on new opportunities for waste diversion.”

He adds that “recyclable materials are sorted after collection from KPU,” and that “plastic containers, bags and overwrap are processed in the Metro Vancouver region into pellets that can be manufactured into new packaging and other products, according to KPU’s waste services provider Super Save.”

Sodexo, the company that manages the cafeterias at each of the campuses, has implemented measures to reduce plastic waste as well, offering compostable alternatives for cutlery, cups, straws, plates, to-go containers, soup bowls, and sandwich boxes. Starting in September, they will also start using plastic alternative gravy cups and small portion cups.

“Sodexo reports 90 per cent of its single use items are now biodegradable, compostable, or recyclable materials,” wrote Hunter.

“Coffee cups and sleeves are recyclable, but Sodexo also offers a 12 cent discount in its cafeterias for patrons who bring their own reusable cups. Coffee cup lids and soup lids are still plastic because Sodexo is currently unable to source a safe biodegradable or compostable alternative in Canada.”

Products sold by Tim Hortons also create a large amount of waste on campus, some of which is recyclable. The university does not have a say in Tim Horton’s policies for offering re-usable or compostable products.

“It’s one of those hands-off [agreements],” says Richard.

“The school offers the premises on their contract, but they don’t have a say on how to run their business. So, for any initiative like trying to get them to use bird-friendly coffee, avoid the use of palm-oil, or for that matter, to look at coffee cups, utensils anything like that, they won’t talk.”

Richard emphasizes that these policies are controlled by the corporation and not individual franchisees.

Every year, students in the “Solid Waste Management” course conduct a waste audit on the Langley campus for which they evaluate the amount and types of waste disposed of in garbage and recycling bins.

In 2018, they conducted two audits: one on Oct. 18 of the bins inside and one on Nov. 1 of the garbage dumpsters outside. According to the second audit report, there was 60.6 kg of waste thrown out, but only 15.7 kg of that was “actual garbage.”

“An astounding 69.4 per cent of the waste generated from Nov. 1 could have been recycled or composted instead of going to the landfill,” says the report.

The students recommended a number of changes that KPU could look at that for reducing waste and improving sorting, some of which the university has already implemented, such as reducing plastic cutlery and straws and offering discounts for reusable mugs in the cafeterias. Other recommendations include putting up educational posters about waste reduction and having info sessions about sorting practices, creating a website for the same purposes, and increasing the availability of the multi bins.

Richard says that there are opportunities for students to work with KPU Facilities to improve their waste disposal process.

“If Facilities said, ‘Oh my god, this would be so useful and we could help you this way and that way,’ then we could probably find a way to get it done,” he says. “There’s no question that Facilities have been great in helping us, and they’ve appreciated getting the data, so it goes both ways.”

He says that he would like to expand the audit projects to every campus in the future if given the resources and opportunity.

The Kwantlen Student Association has also been ramping up measures to address plastic waste reduction.

Pedersen is also a graduate of the Environmental Protection Program and a member of the KPU Environmental Sustainability Committee.

“The committee looks at sustainability in a holistic manner, so we’ve definitely discussed waste reduction, and we’ve discussed all sorts of different initiatives on campus,” she says. “If KPU decides to move forward and rebrand or do any new things with the waste system, we’re happy to take on that kind of work.”

The Grassroots Café on the Surrey campus is run by the KSA, and their initiatives include providing metal cutlery, ceramic mugs, and plates for eat-in dining. There is also a 25-cent discount for bringing your own mug at Grassroots, and the KSA hands out coupons for reusable bottles and travel mugs at KPU Orientation.

“If Canada moves forward with a ban on single-use plastic, the industry’s going to evolve and hopefully that means that making these changes will become easier,” says Pedersen.

“If there’s a systemic change taking place, then every university will be working on the same kind of initiative because the government has mandated it. There will be a lot more options. If we phase out single-use plastics, we’ll start thinking in new ways and hopefully come up with some solutions.”