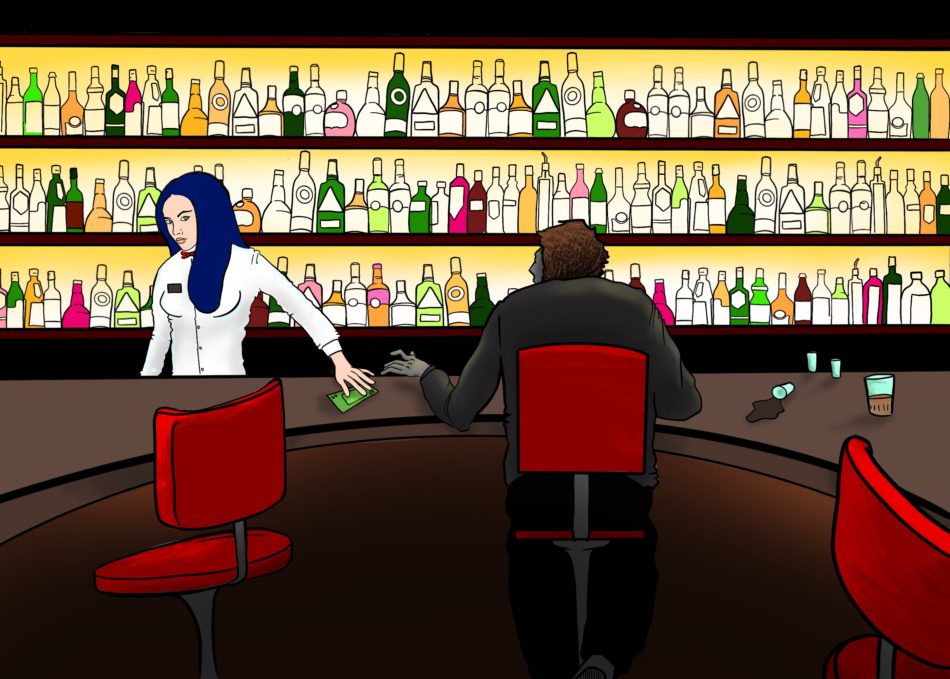 Tori Evans was pouring a beer when she felt her phone vibrate in her apron pocket.

“Pour this beer, take a payment from table two, bring food to table fifteen, someone needs ranch, then I’ll sneak to the back to read it,” she thinks out loud.

The running around continues for a couple hours before she has a chance to clock out for a phone break. Evans pours herself a ginger ale, needing the sugar boost, clocks out, heads to the break room, and pulls out her phone.

“Steve: text message,” it reads. Steve is a regular customer at the restaurant where Evans works, and she is his favourite server. Every day, he sits at the bar, head down, mumbling to himself. Sipping a double vodka cranberry, he slurs his words and throws around sexual innuendos.

Every time this message comes up she regrets the day she gave him her number.

“He honestly seemed so nice and harmless when we first met,” Evans says.

She explains that when she first started, the other servers warned her about him, but he seemed so friendly she did not take their warnings seriously.

“You look like you could use an orgasm. I can help you with that.”

“Leave work right now. I’ll pay you more than you’d make here and no one has to know.”

These are two of the more memorable texts Evans has received from Steve. He sent these texts while he was sitting at the bar and she was working.

She shakes her head. “I put up with it because he tips so good sometimes,” says Evans.

“I block his number on my days off, but when I come to work I pretend like nothing happened. He comes in every day. I’m scared my boss would get mad at me if I was rude to him,” Evans’ younger coworker, Kayla, adds.

A report by The Glass Floor from 2014 revealed that 59 per cent of female restaurant employees experience harassment from customers monthly. Forty eight per cent reported having experienced sexually suggestive looks or gestures. The problem with this statistic is that it’s difficult to recognize these looks and gestures officially as sexual harassment.

“Harassment is much more subtle [at first] and insidious [than sexual assault],” says Crown Prosecutor Tamara Rock. “The impact of harassment could be so much worse—like a long slow erosion on a person’s mental health.”

Without defining what harassment is, 90 per cent of women working in the restaurant industry admitted that customer behaviour makes them feel uncomfortable. The rate is higher for employees whose incomes depend on tips.

These attacks on service employees go unreported, Rock says, because the proof is the complainants’ word and the trial is simply whether or not they are believed. She says there is no specific criteria for how to identify harassment, unlike sexual assault, which she defines as “non-consensual touching of a sexual nature.”

So even if the harasser is going out of their way to go to the workplace of an employee they are harassing, it will be hard to prove in court that they are specifically following the employee. The harasser can use the defence of just liking the restaurant or bar.

Rock says, in her experience, there is always trouble distinguishing between harassment and inappropriate behaviour. Almost all sexual assault trials she has seen are based on whether the victim is believed or not, because all they have for proof is what they say happened to them.

“We know how to identify sexual violence and criminal harassment. Whether or not we can prove it is a different question,” says Rock.

She points out that she can now listen to someone discuss their experience with sexual harassment and immediately know whether or not she could get a person convicted. In Evans’ case, there would be no conviction.

Kelsey Holmes works as a server in a family-owned breakfast restaurant. Because the restaurant is not licensed to serve alcohol, her customers are primarily groups of teens and large families, but occasionally solo men come in to dine.

One shift, during a busy lunch rush, Holmes hears a whistle from behind her. She ignores it, as she is taking an order from another table.

Holmes feels a sharp pain on the back of her leg, followed by a hushed, “Ah fuck, just missed her ass.” She turns around and sees the customer responsible for the whistles holding a hot cloth proudly, after whipping her with it.

“Finally you notice me. I was about to start lowering your tip for every time you ignore me,” he says with a smirk.

My personal experience was not with a customer. It was not a stranger. And it was not something I could report to management, because it was management. I was working on the patio. It was hot so I was dressed for the weather. There was a wedding in the field that the restaurant patio overlooked, and women in sundresses flooded the area. The groomsmen sipped scotch at the bar, commenting on the colours and curves of the women below. My boss rolled up his sleeves, leaned on the bar, and joined in on the conversation.

“Watch boys, the wind picks up the dresses.”

“Now that’s a woman that should not be allowed in a skirt.”

And the one that most angered me:

“Why do you think I only hire women to work the patio?”

These are specific, word-for-word quotes. These are not memories. I pulled these quotes from my email history of the official account of what happened. As it was happening I was nervously scribbling his quotes into my notepad, hoping I would have the strength to go to human resources with the information.

When this happened, I had no one to defend me. Usually in situations involving harassment at work, the boss will defend their employees. But this was my boss.

I remember the slow walk up the stairs to the hidden human resource office on the ninth floor. I tapped on the door, it opened just a crack, and I turned around and walked away, head in my hands. I sent an email to HR later that day with my two weeks resignation notice.

The experiences of Tori, Kayla, Kelsey, and myself are not unusual. These assaults and inappropriate behaviours happen daily in restaurants across Canada. Every day, women squeeze into their tight black T-shirts, brush mascara through their lashes, and head to work hoping these tactics will lead to more tips.

Tips which can always come at a cost.