The Addictive Allure of Paying to Play

From loot boxes to “pay-to-win” mechanics, microtransactions in video games can wreak havoc on players’ lives—and their wallets 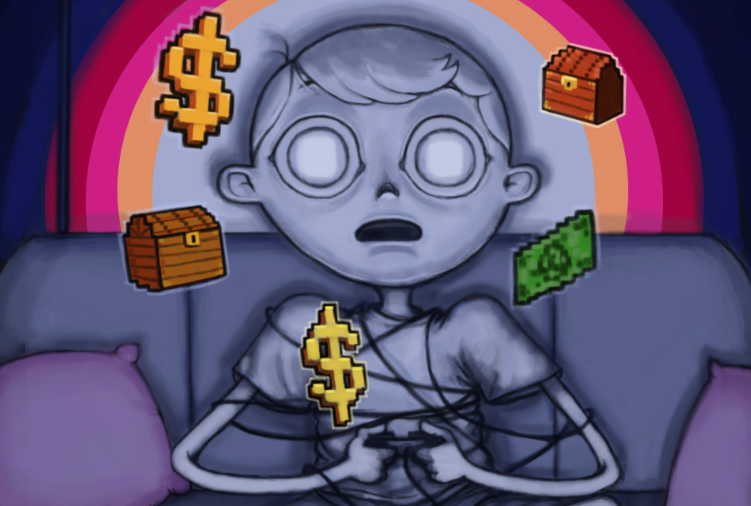 For today’s post-secondary students, video games have long been a part of everyday life. And for many of us, myself included, there was no greater joy as a child than coming home after a long day at school, finishing up your homework, and rushing over to the nearest TV to turn on whichever console you had in the house. Some of my fondest memories involve my old GameCube, Super Smash Bros. Melee, and whichever new Sonic game had just come out (yes, I was one of those people).

But video games—and the industry behind them—have been on the receiving end of loads of backlash and intense government scrutiny. Up until recently, this wasn’t because of excessive amounts of violence, gore, or even nudity. It was due to the increased presence of microtransactions and the toll they’ve been taking on players and their families.

Microtransactions are a business model used in some in video games which allows users to purchase virtual goods with small payments of in-game currency or real money. This model is a staple of the mobile game market, and is most frequently found in free-to-play games as a way to provide a source of revenue to the developers. Think Candy Crush or other mobile games you might have on your phone.

However, as of late, they’ve become more and more present in bought and paid for games, both on the online gaming service Steam and on physical consoles.

“Earlier on … there’s just one transaction. You get the game, you play it, and you’re done,” says Jessie Nguyen, president of the Kwantlen Gaming Guild.

“But then there started to be, like, cheat codes for the Nintendo DS. You get a cartridge for all the cheats and then you get your game.”

Microtransactions have evolved since those days, with three types of microtransactions present in current video games: cosmetic microtransactions, such as modifications or skins to change your character’s look or to improve the look of a game overall, pay-to-win microtransactions that give paying players a certain advantage over those that play for free, and loot boxes, in which a player can buy an in-game package containing any assortment of both cosmetic and pay-to-win items.

The last two kinds of microtransactions have been criticized in recent years due to evidence suggesting that these kinds of features use mechanics that prey upon players vulnerable to gambling addiction.

Kwantlen psychology instructor Dr. Jay Hosking explains how the effect of drugs on the brain is similar to that caused by other addictions.

“The common thread across all these drugs of addiction is that they facilitate an increase in one specific neurotransmitter system, specifically dopamine,” says Hosking. “They make the dopamine system more efficient, more active, stronger.”

This increase in the transmission of dopamine, according to Hosking, results in the individual building up a tolerance to the substance and needing a higher dosage to get the same effect as before. This, in turn, results in them developing a dependence on the drug and experiencing symptoms of withdrawal when deprived of it.

However, he adds that even “non-pharmaceutical addictions are still somewhat more contentious.”

“Generally speaking, we apply the same criteria to behavioural addictions that we do to substance addictions,” he explains.

Interestingly enough the one form of behavioural addiction present in the current Diagnostic Statistics Manual (DSM) is gambling addiction, which, like drug addiction, is caused by increased transmission of dopamine through the brain while gambling. This too creates a chemical tolerance and can cause withdrawal symptoms and the compulsive need to continue gambling despite its negative consequences.

Loot boxes, which are most frequently found in multiplayer games, use aspects of gambling like randomization. This makes them especially dangerous to people with gambling addictions, or even children who may end up developing them.

Gabriel Brooks, a graduate student at the University of British Columbia, was more precise in his thoughts on loot boxes and their addictive potential. During a study he conducted this past year under

According to Brooks, the “gambler’s fallacy”—the erroneous belief that if something happens more frequently than normal during a given period, it will happen less frequently in the future, or vice versa—was present in people who play random chance games like slot machines and people exhibiting risky loot box behaviour. Other research shows that loot boxes either appeal to “problem gamblers” or promote “problem gambling.”

Game companies continue to use these techniques despite their negative effects, and Brooks says that microtransactions have become a common method of monetization in video games over the past decade. Loot boxes are a reflection of this trend. A January 2019 publication by Nenad Tomić in the Journal of Economic Science Research found that, in 2018 alone, game development company Electronic Arts saw a 31 per cent increase in revenue from the previous fiscal year due to microtransactions, or as EA refers to them, “live services.”

This figure alone tells us that microtransactions are a huge source of revenue for video game developers, and, as a result, they might be more than happy to put aside any moral scruples about who they’re getting their money from. There’s even a video on YouTube that confirms this, in which Tribeflame CEO Torulf Jernstrom freely and openly talks about getting players of free-to-play games hooked on spending money using tactics that can only be described as predatory. Some of these tactics have since been adopted by more mainstream developers, including EA.

While the techniques used by developers to get players to spend money are at best dubious and at worst callous, one can breathe a sigh of relief knowing that they aren’t going unnoticed. As more and more people are coming forward to share their stories about the harms microtransactions have done to their financial wellbeing, governments around the world have started to take notice and crack down on the video game industry.

Since 2012, governing bodies such as Belgium’s Gaming Commission have categorized buying loot boxes as a form of gambling, and countries such as China, Japan, and Australia have regulated the practice under their respective gambling laws as a result. In May 2019, Missouri Senator Josh Hawley introduced a bill named The Protecting Children from Abusive Games Act, with the goal of banning loot boxes and pay-to-win microtransactions in video games targeted towards children. The bill uses similar conditions outlined in the Children’s Online Privacy Protection Act.

Video game developers employing microtransactions in their games have also come under increased media scrutiny. For example, Jim Sterling, a freelance video game journalist, runs a YouTube channel called “The Jimquisition” includes videos about microtransactions and stories from people whose gambling problems have been preyed upon by such techniques in video games.

Additionally, many players have noted that developers of video games featuring microtransactions tend to cut corners when it comes to the game’s actual quality. Critics often talk about Middle Earth: Shadow of War, Star Wars Battlefront II, and Fallout 76 as prime examples. However, the video game industry has pushed back hard in defending microtransactions and the practices associated with them. EA initially refused to remove the ability to purchase FIFA points in FIFA ’19, in resistance to the efforts of Belgium’s gaming commission to regulate the game.

The video game industry has become addicted to microtransactions, an addiction they are clearly trying to pass on to its customers, and many people are worried that their financial and mental wellbeing—as well as the quality of video games put out by developers each and every year—will continue to suffer because of it.