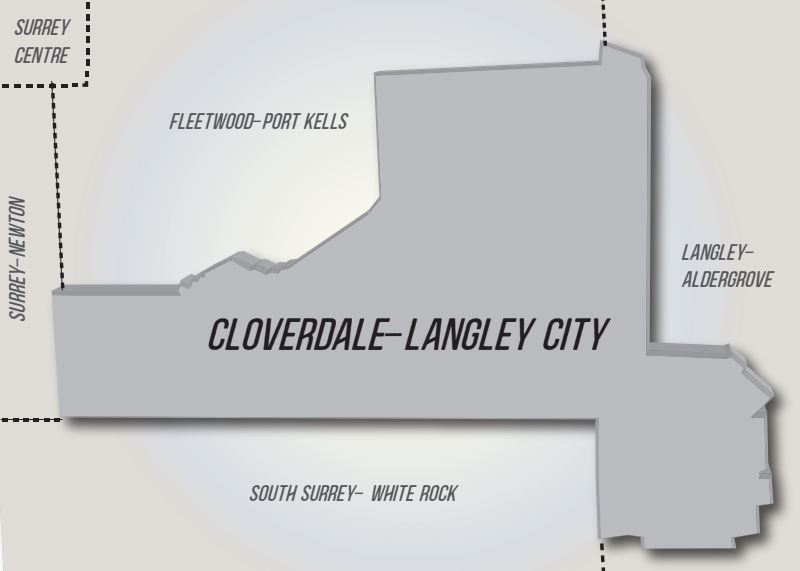 The incumbent MP for the Cloverdale-Langley City riding, John Aldag, was elected during the 2015 federal election. Aldag has a Master of Business Administration from Royal Roads University and had a 32-year career with Parks Canada. During his term as an MP, he was a member of the Environment and Sustainable Development committee, the Special Joint Committee on Physician-Assisted Dying, and the House of Commons Special Committee on Electoral Reform. Aldag also introduced Private Member’s Bill C-374, which would provide a seat on the Historic Sites and Monuments Board of Canada for First Nations, Inuit, and Métis representation. Aldag has stated in his platform that he will commit $3 billion for transit in the area, including a Skytrain extension through Cloverdale and Langley. He would also like to provide interest-free loans for mature and returning students and better job opportunities.

Jansen ran Darvonda Nurseries in the Township of Langley with Byron, her husband of 31 years, and has been vocal on issues such as abortion and physician-assisted dying. In September, photos surfaced of an event held at one of her greenhouses featuring performers dressed in blackface during a celebration of Dutch Christmas customs known as Sinterklaas. She has promoted creationist ideas and cast doubt on the science of climate change. Jensen has not responded to multiple interview requests. Her website states that she believes governments should allow “fathers and mothers to raise sons and daughters without interference” and that she “will be a strong voice for individual freedoms of speech, religion, and expression.”

After obtaining a Bachelor’s degree with a major in criminology and a minor in political science from the University of Manitoba, Banwarie worked with the Royal Canadian Mounted Police for 20 years. During that time, he worked in several units including border integrity, national security, federal serious and organized crime, and federal drugs. He was also the President of the Mounted Police Professional Association of Canada, which fought to unionize the RCMP, and has continued to advocate for officers who are victims of harassment, bullying, racism, and injury while on duty. Banwarie states that he will try to make post-secondary education public and more accessible, work with provinces and territories to cap and reduce tuition fees, and eliminate interest fees on student loans. He also plans to help combat gun violence, improve public safety, and provide a pharmacare plan that not only covers prescriptions, but also mental health, dental, and eye care.

This is Caelum Nutbrown’s first time running for federal office and his first time running as a Green Party candidate. Nutbrown has a Social Services Diploma from the University of the Fraser Valley and was a mental health worker with the Portland Hotel Society during the opioid crisis. Nutbrown did not respond to interview requests, but his campaign website states that he would work to close tax havens and loopholes, support small businesses, and encourage investment in sustainable industries across B.C. and Canada.