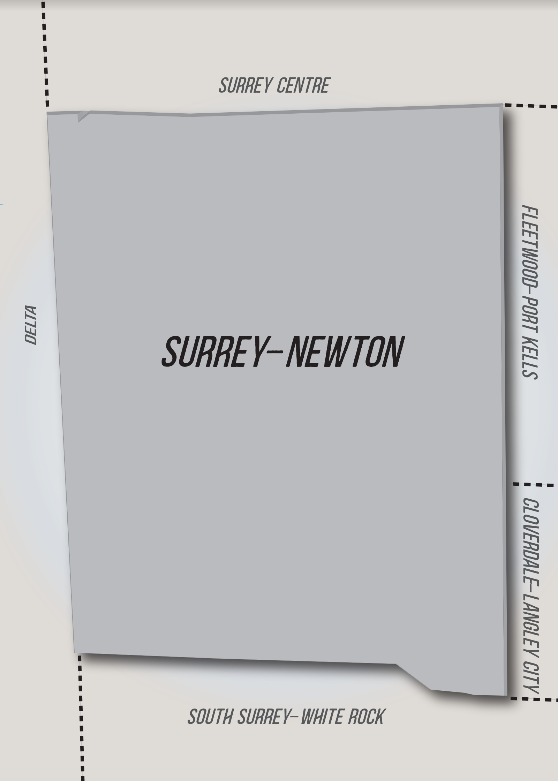 Sukh Dhaliwal, the current incumbent Liberal MP for Surrey-Newton, is running again in this year’s election. He was the MP for Newton-North Delta from 2006 to 2011, and is a professional engineer and B.C. land surveyor. His campaign states that he is on the Board of Directors for the Self Employment and Entrepreneur Development Society. As well as a member of the City of Surrey Parks and Community Services committee.

Dhaliwal volunteered with Surrey Memorial Hospital Foundation’s Emergency Centre Campaign, which was fundraising for the construction of the hospital’s expanded emergency ward. Dhaliwal has lived in Surrey-Newton for the past 25 years, and founded his own business Dhaliwal & Associates Land Surveying Inc. here. His website states that he is a former member of the Surrey Board of Trade, and identifies as an active spokesperson for small businesses.

Harpreet Singh, a former journalist, has lived in Surrey-Newton ever since he immigrated to Canada in 2002. According to his biography on the campaign website, Singh has worked as a television and radio host, political commentator, writer, and producer.

“I feel like students need to have better education, and education should be within the reach of everyone, not those only who are rich,” he says.

“The cost of education is going up. I will be strong and advocated for the students that they should be provided with the best opportunities and the lowest cost so they can pursue their education.”

Singh wants to invest in cleaner and greener technology for his riding and says he values the regional, cultural, and socio-economic diversity of Canada.

He also wants to focus on preventing violence and the rising cost of living in Surrey-Newton. Singh believes that all Canadians need to come together to face national and international challenges such as terrorism and international crimes against humanity, as stated on his campaign website.

As a community activist and language advocate, Harjit Singh Gill worked as a civil engineer in South Asia before moving to Surrey 22 years ago. In Canada, he went from being a taxi driver to a small business owner and eventually a radio talk show host before getting into politics.

“The term ‘gangster’ is not appropriate for them. They are involved but not in that they’re running a gang,” he says. “We need a program where they can come and sit [and tell] their stories from where they started. Is it bullying? Or family violence?”

He continues, “Poverty is a major issue. That’s what the census said in 2016, that 23 per cent of parents in our whole riding [are] living in poverty.”

In the lower mainland, he has raised awareness for blood donations, worked to expand mental health initiatives and addiction services, and helped create the South Asian Helpline, according to his campaign website. Gill is standing with Jagmeet Singh to push for universal pharmacare, affordable housing, and bold action on climate change. To students, he says, “You are our future. I want to get that seat and give you a platform.”

Rabaab Khehra is a student at the University of British Columbia, where she is currently studying international relations and political science.

“A big issue in our riding is gang violence and we need to address it head-on and at a young age,” she says. “I would want to invest more money into programs that help young kids feel connected and feel like they have mentors in society and people they can trust.”

Khehra’s campaign website says her involvement in many organizations from her community including Big Sister, a program that helps young girls develop confidence and connections. There, she worked as a teen mentor and as a delegate for the national youth council. As part of her job, Khehra works with children for the City of Surrey and hosts and busses at a local restaurant. She also wants to focus on poverty reduction.

“A lot of people in our riding are single mothers or people that can’t sustain themselves because the living wage in the lower mainland is so high and the minimum wage is so low,” she says. “I want to invest more money into creating public housing and [create] a livable income.” She would also like to invest in disability support and foster programs, providing tuition subsidies for students, and eliminating the need for student loans.

Khehra says that the climate crisis must be addressed by making dramatic changes to Canadian legislation, including introducing higher taxes for companies polluting the environment.