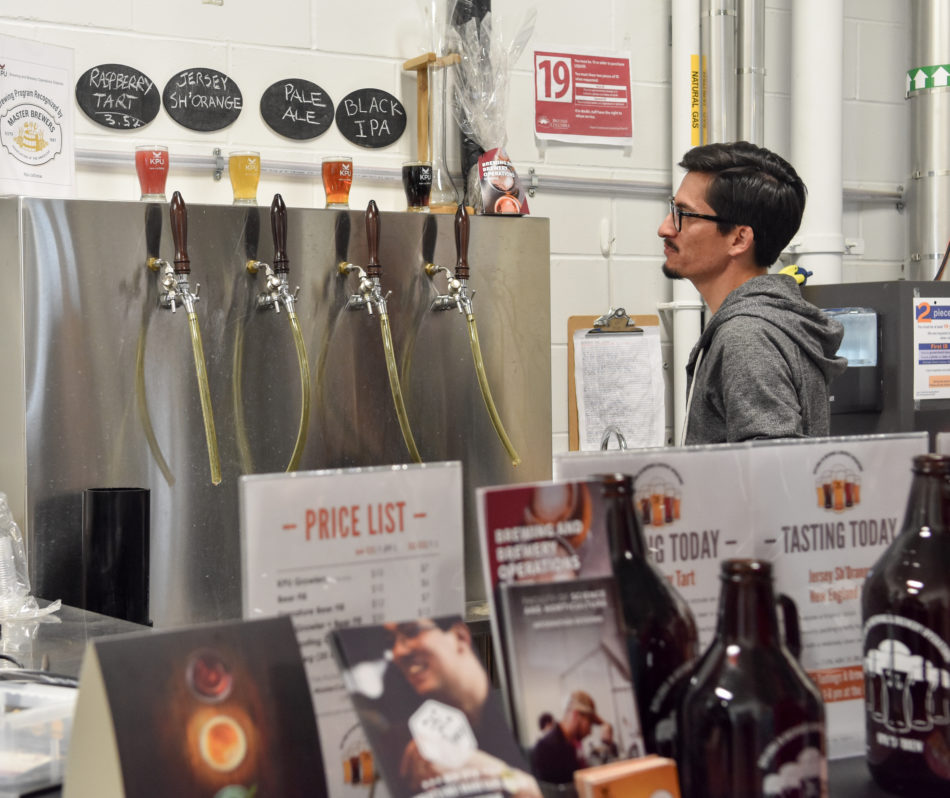 The KPU Brewing program won Brewery of the Year on Oct 19. (Saira Kanwal)

KPU’s Brewing and Brewery Operations program won Brewery of the Year and took home eight other awards, many of them for first place, at the British Columbia Beer Awards on Oct. 19.

KPU Brewing won awards in many categories, among them the North American Amber Ale, the Pale German Beer, and The German Wheat Beer. The brewery also earned style points from consumers by using trendy ingredients such as New Zealand hops, and by giving their beers attention-grabbing names — the Adams Family Festbier, May the Schwarz Be With You, and Pilsbo Baggins arguably being some of the best ones.

Jon Howe, lab instructor in the KPU brewing program, is proud of all of the awards the program has won over the years. They are kept in an impressive display case at the center of the brewery.

In previous years, they had taken home bronze and silver at the B.C. Beer Awards. But this year, marks the third time KPU has taken part in the competition.

Although Howe wasn’t expecting the program to win Brewery of the Year, he says he is glad to witness its success. If this trend keeps up, the department may even need a newer and bigger display case next year.

“Being the best brewery in B.C. validates our practices and will hopefully show employers the value of hiring students trained in our facility,” he says.

Throughout the program, students study the science, production, and business of brewing craft beer. Special attention is given to taste testing each batch of beer that is later entered into the running for contests. It is this attention to taste testing, which not all breweries have the time or resources to guarantee, which helps perfect the recipes at KPU.

In addition to winning big at the B.C. Beer Awards, KPU Brewing has been recognized internationally. Earlier this year, it participated in the U.S. Open College Beer Championship and won the title of the Grand National Championship, among others.

These achievements come just a few years after the program was created in 2014. In that time, it has gone from being the new kid on the block to the school that brews some of the best beer in North America.

Howe acknowledges that of the 40 students currently enrolled in the program, only six are female, making it a male-dominated department.

However, he notes that he and his colleagues are actively working on diversifying the student base, and that within five years of operation, diversity in the program has seen gradual improvement. He is committed to ensuring the continuation of that growth.

On Fridays, the brewery is open to the public for tastings, and the beer it produces is also available for sale. As it continues to build its reputation, more and more people come by to take part in these Friday gatherings.

If you ever find yourself in Langley on a Friday, be sure to stop by and try some of the beer. And if you are interested in becoming a brewmaster, KPU has an award-winning program that you could be a part of.