Surrey Should be Proud of the Peacocks Marching Through its Streets

The Indian peafowls are being captured by the city of Surrey, but not all of them need to go 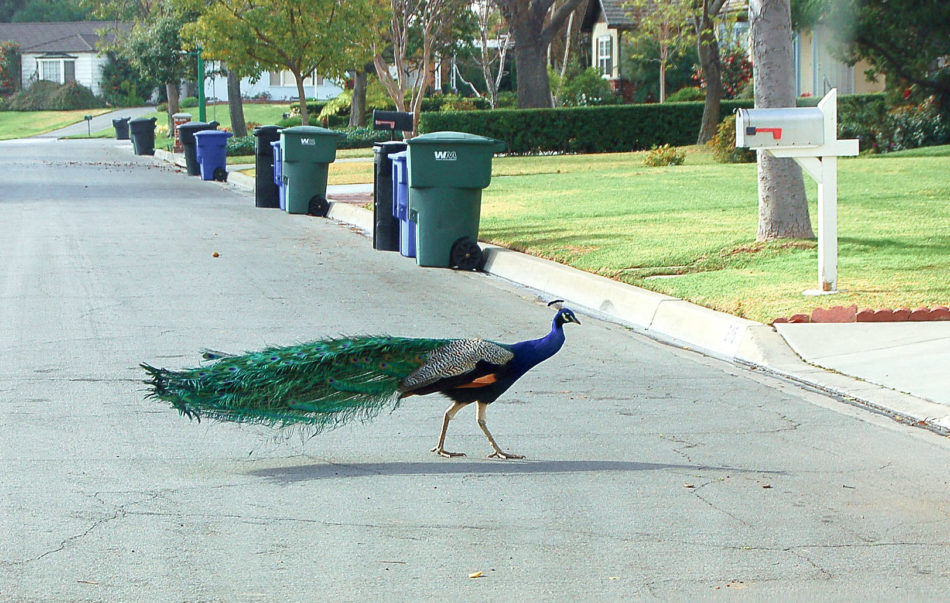 Peacocks have been spotted wandering around Surrey. (Flickr/Zeetz Jones)

Big, blue, fluffy birds roaming the streets of Sullivan Heights in Surrey are causing quite the split-up between neighbours and ruffling the feathers of city officials.

Peacocks — or more specifically, Indian peafowls — have been casually walking around Sullivan Heights for longer than I have been alive. Last year, a Sullivan Heights resident told CBC news that the peacocks have been in the area for around 40 years.

Legend has it that a farmer left the peacocks behind or just couldn’t catch them once they escaped. Ever since then, the total number of peafowl has continued to grow, and the birds have been walking through people’s backyards and pooping on the streets with impunity.

During mating season, which is usually in spring and early summer, the mesmerizing birds start making high pitched noises that sometimes disturb the peaceful sleep of some residents in the area.

This is why the City of Surrey has made a goal out of catching all the peacocks until the city becomes peacockless. As of this October, the city has caught around half of the birds since efforts began last November.

According to CTV News, the city has taken 17 birds to the Surrey Animal Resource Centre, where they were adopted. Unfortunately, there will be fines for those looking to house or feed the creatures. Feeding can cost $250 and housing the peafowls around $450.

But forget all of that because peacocks are exotic and gorgeous little beings. I mean, you don’t have to go to a zoo to see an Indian peafowl. Just come on down to Sullivan Heights and take a picture with the little guys then show it to all your friends. I am sure they will die of envy.

Surrey should feel lucky to have such unique birds circling the town. In fact, the article by CTV News states that not every Sullivan Heights resident rejects the existence of peacocks in the area.

Other neighbours enjoy having the graceful birds. Some say that the birds aren’t harmful and that they belong to that environment.

If you ever get a chance to see peafowls walk, you will probably be mesmerized. The peacock’s march is slow and graceful, and the way they drag their feathers across the ground almost looks like they are wearing a green gown.

And let’s not forget about their blue antenna feathers on their heads that resemble a tiny crown.

Peafowls are really good for our environment because they are “ground-feeders that eat insects, plants, and small creatures,” according to National Geographic.

Because their diet consists of only insects, plants, and small creatures, they don’t actually eat people, which is a huge benefit for Surrey residents.

Just imagine walking to your house on a gloomy night, and right before you open your front door, you hear a slight crackle coming from the dark shrub beside you. You lean in closer, because you are a curious person by nature. Then, all of a sudden, the head of an Indian peafowl comes out, and in that moment…  aren’t you just glad they don’t eat people?

For those people who are anti-peacock, you should recognize that the peafowls make Surrey a more exotic and interesting city to live in, though maybe if they keep on bugging residents, the housing prices might come down. But that’s just a theory.