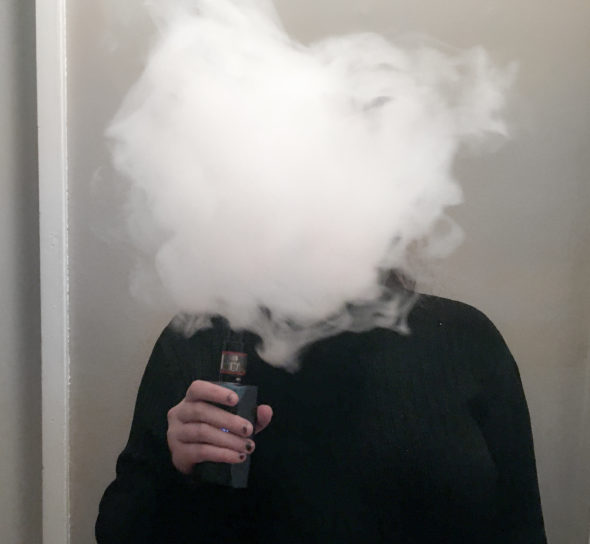 Vapes have been a cause of major illness in, such as “popcorn lung,” which has had an increasing affect on Canadians. (Kristen Frier)

The use of e-cigarettes and marijuana vaping products are causing health complications in both the United States and Canada. This isn’t stopping people from vaping, however, and the largest demographic of vape users are teenagers and young people.

The case making headlines in Canada is that of a 17-year-old boy in London, Ontario, who was diagnosed with similar symptoms to the disease nicknamed “popcorn lung.”

The name originated from a microwave popcorn-making factory in Missouri, where workers began to develop damage to their bronchioles from a chemical in the factory air.  A similar phenomenon is occurring in the lungs of vape users.

“This is an example of a person who … is very severely injured by vaping to the point that he almost died,” said Middlesex-London Medical Officer of Health Dr. Chris Mackie in an interview with CBC.

The young boy will also face prolonged impacts that may be chronic, preventing him from performing physical activity normally.

There are many cases like his across North America. In the U.S. alone, the lungs of 2,051 individuals have been affected by vaping. There have been 40 confirmed deaths.

One of the culprits behind the vape-related illnesses is Vitamin E Acetate. This chemical is found in many skin creams, gels, and shampoos and is not damaging to peoples’ health, but when inhaled, its effects can be detrimental to lung function.

Vaping is not a risk-free alternative to smoking cigarettes, and scientists are seeing more and more health issues linked to THC-infused vapes.

“What happens is these chemicals get into your lungs and irritate young lungs. Think of it like an allergy. If you rub up on cedar bushes with sensitive skin, some people will react to that and start itching really bad and some people don’t,” says David Florkowski, KPU’s Dean of the Faculty of Health.

Wilson Dicarlo is a 20-year-old living and working in Victoria B.C. and a regular vape user. Dicarlo uses the popular brand JUUL, which represents a large portion of the e-cigarette market. Dicarlo started vaping in an attempt to quit smoking cigarettes. Though he used to smoke nearly a pack a day, Dicalo says he hasn’t touched a cigarette since switching to vaping.

“I feel the same about vaping as I do about smoking [cigarettes]. The condition of both is a shortened life. It doesn’t bother me. It should, but it doesn’t,” he says.

Though Dicarlo says he hasn’t felt any effects on his health since starting vaping, he’s aware of the potential for future harm.

“I think it’s because I’m still only 20. I am still going through my immortality complex that most young people go through,” he says.

Many young people are simply unaware of the risks associated with vaping. When it was first introduced into popular culture, companies were not legally required to disclose any information about health hazards, which has led to the common assumption that vaping is a consequence-free activity.

“People who are thinking about vaping, or maybe have just started it, any public health or medical professional would strongly advise you to not try it at all,” says Florkowski. “If you are on it … seek medical advice to get off vaping.”