A Century From Now, Not Even the Republic of Alberta will Profit from Oil and Gas

By fighting a shift to greener energy with Wexit, Alberta is only postponing economic catastrophe 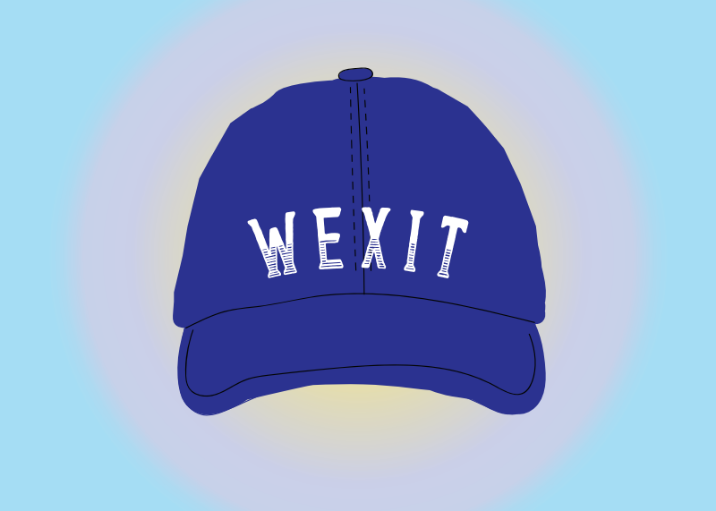 Growing up in the bastion of Liberalism that is Vancouver, it’s hard to put oneself in the shoes of those for whom carbon-intensive industry has always been the bedrock of a quality life.

But imagine mass foreclosure and bankruptcy, communities fraught with unemployment and suicide, marriages falling apart, kids going hungry. These are challenges with which anyone can sympathize.

This is the worsening reality that Kathy Flett, the interim leader of Wexit Alberta, describes for families throughout her province.

“An unemployment rate that continues to rise, businesses closing left, right, and centre, big business pulling up and leaving our province,” she says. “Somebody’s got to do something. We can’t continue to live like this.”

Generations of Albertans have built their livelihoods on the fruits of the oil and gas industry, feeling both the booms and busts of a lucrative but equally volatile fossil fuel-based economy.

Over 1,700 people gathered for a Wexit rally in Calgary last month. (Kathy Flett)

As global demand shifts towards renewable technologies, finding solutions to reshape Alberta’s economy is essential. It will take time, innovation, and cooperation, but if we do nothing, the children of today’s Wexit-willed Albertans will be the ones bearing the economic burden.

While the likelihood of a literal Wild Rose Country is slim (read: virtually impossible), a recent Ipsos poll conducted by Global News found that about one third of Albertans feel the province would be better off on its own.

Proponents of separation cite a United Nations declaration guaranteeing land-locked states access to and from the sea, arguing that Canada would be obligated under international law to allow Alberta to transport its resources to the West Coast.

But the declaration stipulates that the operation of pipelines hinges on mutual agreement between states, so the issue of moving Alberta’s resources to market could, if anything, be further complicated by independence.

And that’s only one issue.

“It’s a very unidimensional economy,” says Conrad King, a professor of political science at Kwantlen Polytechnic University. “How would they get food security when they’ve got limited agriculture products? … It would be expensive. They’d have to pay customs duties.”

But beyond separation, King argues that the true goal of Wexit Alberta is to change political discourse in the province and in Ottawa.

Flett agrees, but insists that Alberta sovereignty is still the group’s priority.

“It’s educating people on how to do this and how it’s going to work and keeping the ball rolling to get there,” she says, adding that — even if Andrew Scheer were elected — she sees the Wexit movement as inevitable.

Albertans are frustrated, and dissatisfaction with the federal government is a sentiment that extends far beyond the province’s burgeoning Wexit rallies. Three major areas of concern are the Trans Mountain Pipeline expansion, carbon taxing, and the distribution of equalization payments.

“The one that really gets us are these payments and how unfair they are, how one-sided they are,” says Flett. “Nobody else who is leading any other province seems to be concerned by that.”

For those witnessing Albertan communities deteriorate, it isn’t hard to grasp why this view is so pervasive in the province, but King says statements like this reflect a misunderstanding of the purpose that equalization payments actually serve: ensuring all Canadians have equal access to services.

That means that in a province like Newfoundland — which has less infrastructure and a more dispersed population — extra funding is necessary to guarantee that services like healthcare in St. John’s meet the same standard as those in Vancouver, Toronto, or Calgary.

On the other hand, Alberta’s historic prosperity means that services in the province today remain relatively robust, and national equalization payments continue to reflect that.

Then there’s carbon pricing. In our current political climate, the imposition of an additional federal tax undoubtedly feels like a symbolic middle finger to a province already struggling economically. But while the optics certainly aren’t good, its effects — at least on Canadian pocketbooks — should be minimal.

“The carbon tax is revenue neutral, meaning that any money that’s brought in on the carbon tax is actually paid back out, not just through tax incentives but other kinds of programs,” says King.

What is the solution to this economic downturn? Trudeau promises that the Trans Mountain project will go ahead, and looking past the environmental implications, there’s no question that this will be good for Alberta’s economy in the short term.

But pipeline or no pipeline, long-term global prosperity depends in part on our relationship with the world’s resources, and if Albertans – and all Canadians – fail to consider the implications of this fact moving forward, we are simply postponing economic disaster.

“One of the amazing things about Albertans is that we always know how to create energy,” says Flett. “As time progresses and as things change, we’ll change along with them.”

But as King notes, politics is short-termism, while significant structural change requires quite the opposite approach.

And of course, it’s difficult for the average Albertan to think decades into the future if they have to worry about making it to the next paycheck or having a paycheck at all.

Nonetheless, immediate transition is imperative. That doesn’t mean transforming the economy overnight, but it does mean starting to make those changes now.

Alberta, we get it. You’re fed up, but Wexit is not the answer.

We’re in this together, and together we have a responsibility to ensure that 20, 50, and 100 years down the road, future generations will be better off for the decisions that we make today.

But first, we need to accept that when the global demand for fossil fuels drops, no governmental policy is going to save our oil and gas industry.