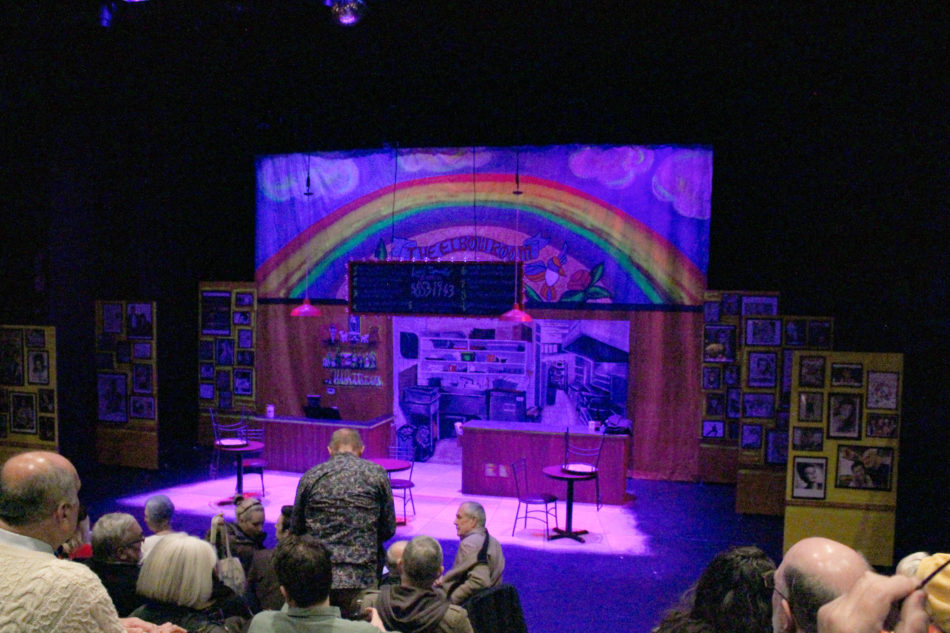 Notorious for sprinkling a bit of sass into every meal, the Elbow Room Café has inspired a holiday musical that has been making audiences snort with laughter.

The play showed at The Cultch, produced by Zee Zee Theatre company, and directed by Cameron Mackenzie. It ran from Dec. 12 until Dec. 29.

Besides being a director, Mackenzie is a producer, founder, and managing artistic director for Zee Zee Theatre. He came up with the idea of creating a play about the Elbow Room Café.

The restaurant was founded by Patrice Savoie and his husband Bryan Searle in 1983. It opened at 720 Jervis Street but relocated to Davie Street in 1996. In 2017, Searle passed away at age 87.

A year later, the café closed its doors in October 2018.

The play highlighted Savoie and Searle’s comedic and emotional personalities, which left the crowd gasping and cheering, and the colourful café setting and elaborate props used for the play felt real and engaging.

Along with Savoie and Searle, the play depicted characters Tabby, Holly, and Amazon, as they get snowed in at the iconic Elbow Room Café on Christmas eve.

Emilie Leclerc is a bilingual actress who works professionally in English and French. She played Holly, a city health inspector with an uptight and serious personality.

“Through being snowed into the Elbow Room Café, [Holly] discovers a part of herself that she wasn’t aware of and she feels accepted with the people in the café, who are sassy and flamboyant, colourful characters,” she says.

The menu at the café included items such as the Elbow Room’s World Famous Big Ass Pancakes, “I Have No Imagination” omelettes, the Tom Selleck Burger, and many more.

Mackenzie explains that this play is different from his other works because it has clown-like and drag queen-esque elements to it. He also says that the show “reminds us what this time of year is truly about.”

“It’s about resting and honouring the winter … [filling] your life with the people that bring you joy and laughter,” he says.

David Adams, who played Searle, says that back when he started his acting career, he worked as a waiter for the Organ Grinder restaurant that used to be on Hornby Street. His manager at the time was Patrice Savoie. This is how they met back in 1980.

“Of course he loves Patrice very much, but his whole thing is that he just keeps giving Patrice shit all the time, especially in public,” he says.

He adds that one of the new things he learned while playing Searle was that he liked to dress up in leather. Sometimes, after a night out, Searle would come to the restaurant in the morning and sit there, slightly hungover, to give his thoughts to the customers in his full leather gear.

An article by The Georgia Straight mentions that the restaurant’s goal was to support those with HIV/AIDS during the crisis. Up until it closed, it raised over $123,000 by asking diners who were unable to finish their meals to donate to local HIV organizations.

“I think it is so important to laugh right now. Laughter is needed on so many levels. It has been a hard year for a lot of folks,” says Mackenzie.