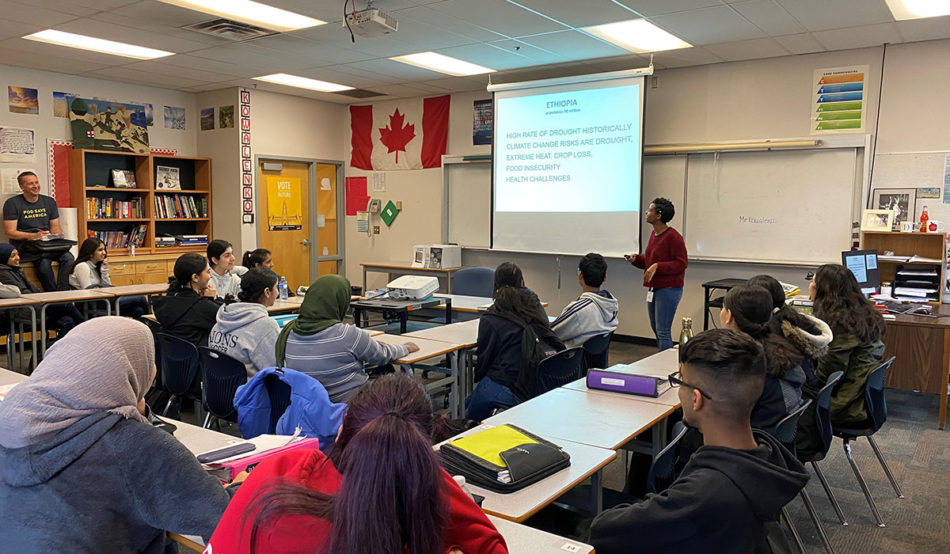 Kine Afework a climate change ambassador giving a talk about the climate crisis in Ethiopia in front of students from Princess Margaret Secondary School in Surrey on Dec. 11, 2019. (submitted)

Pink started the ambassador program with some of his students back in November of 2019. His goal was to give students the opportunity to speak publicly about climate change in high schools, universities, and forums.

Twenty-five students have already signed up for it this year.

“We are getting a lot of students in the last four or five years who are getting fired up about the environment and water and climate change,” says Pink.

The first three talks took place on Dec. 11 at Princess Margaret Secondary in Surrey, where the ambassadors expressed their climate change concerns to three classes of approximately 100 students each.

“It’s really exciting to see the students take on this role of being community activists,” says Pink.

Kine Afework is a climate change ambassador and a political science student. She says that she wants high school students to understand that they are not too small to make a difference.

“You expect them to be bored or whatever, but they were really engaged,” she says. “You can tell that this is really affecting them and you can tell the frustration that they feel.”

“When I did my talk, it was about the Philippines,” says Ronell Pena, a climate change ambassador and political science student. “The main issue I talked about was the Philippines’ floods, mainly as sea levels rise, and how it affects coastal populations.”

Pena says that climate change hits home for him. Back when he lived in the Philippines, he saw how it was causing floods in his community at unnatural times of the year.

The ambassadors’ talks usually take 30 minutes and are often accompanied by a PowerPoint presentation. After this, there are 30 minutes left to answer any burning questions the students may have.

“I presented on Kenya. I got to learn some economic and political factors and issues that they face and how climate change is going to impact them specifically,” says LincoIn Saugstad, a climate change ambassador and sustainable policy studies student.

He says that, during each talk, ambassadors also provide some technological solutions to combat climate change. Saugstad recommends the program for students who have an emotional or personal connection to addressing climate change, and adds that it is a great way for students to develop their public speaking skills and get volunteer experience.

The ambassadors and Dr. Pink are organizing an event called Climate Day, and plan to hold it at KPU Surrey. Dr. Pink says that the event will feature speakers, music, and a live performance, and it will be open to high school and post-secondary students alike.

“At the end of the presentation, a couple of kids came up to us and they are like, ‘Oh, we want to start a community garden.’ And we came up with goals and plans and they were just so excited and so passionate that it just motivated me to do a lot more within the program,” says Afework.

Any student is welcome to join the program by sending an email to Dr. Pink at ross.pink@kpu.ca.