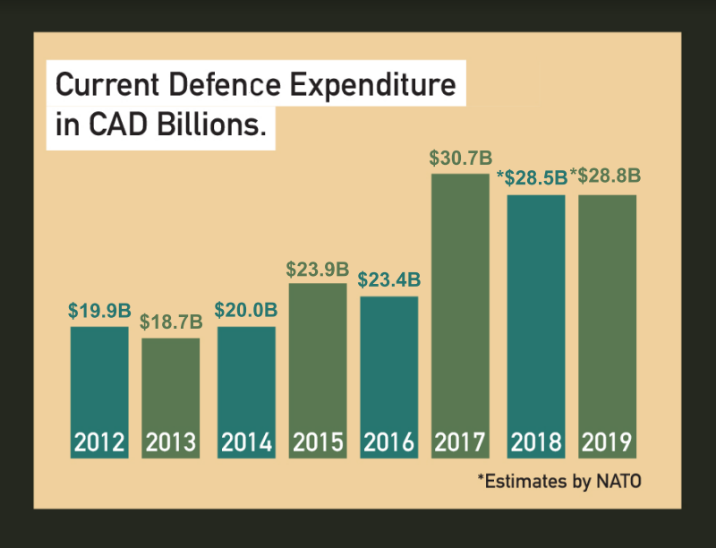 An opinion piece titled “Canada Needs to Spend More on Defence” published recently in The Runner criticizes outdated service pistols, calls to rectify Canada’s underfunding of its NATO defence-spending commitments, and laments that some navy officers “don’t know if they will even get the opportunity to serve on an actual vessel.”

Excuse me while I dab my tears.

Firstly, I’ll address the service pistols. The Hi-Power is not the only pistol issued to soldiers. The Forces also use SIG Sauer P225 and P226 models (as well as the Heckler & Koch USP for Canadian Special Forces), considerably newer firearms. This is not to mention that, in modern combat if soldiers use a personal firearm at all, it will not be their pistol, a weapon effective only at close range. They will be using their service assault rifle, the Colt Canada C7, seen in numerous combat photographs from Kandahar and other parts of Afghanistan.

If soldiers are deployed with substandard or defective equipment, the management of the Canadian Forces should be accountable to the same standard as any other employer in Canada, and be mandated to provide their staff with the tools of their job free from defect and safe to use. Soldiers despise the defective pistols to the point they have become a joke told among the ranks. But we all know what happens when a Canadian Forces member complains to senior staff about a problem: Nothing.

Not all Forces problems are as benign as a pistol that jams at a shooting range, though. The Forces are also a hotbed of flagrant, repeated physical and sexual abuse. Examples have been passing through the news cycle for decades, always with the same narrative: Even when abuse is reported officially, nothing is done. The military, like the RCMP, believes they can police themselves, in spite of considerable examples that they lack that ability. Just Google abuse in the Canadian military and see how many reports have been resolved. I dare you. This could be because they believe they are infallible, or because they believe anyone who questions them is not only anti-cop or anti-military, but anti-Canada.

I’d also like to address Canada’s underfunding of its NATO defence-spending commitments and its “legacy” as a peacekeeping nation. As proven by 2019 data, Canada spends $28.8 billion annually on defence, a number that has risen from a low point in 2013 of $18.7 billion to a high of $30.7 billion in 2017 before leveling off. Since the Liberals formed government in 2015, they have poured an additional $35 billion into defence spending over 2014 levels. So don’t let anyone tell you that Canada hasn’t been investing in its military. On top of this, when reviewing the NATO numbers, only seven of 28 member nations actually meet the NATO guideline of spending two per cent of total GDP on defence. Except for the United States (which spends a whopping 3.42 per cent of GDP to the tune of $730 billion annually), NATO defence spending on average has been in decline since 1999.

Gone are Canada’s days in the 1990s as a United Nations peacekeeper. Canada’s recent campaign in Afghanistan holds not a peacekeeper’s legacy but a legacy of what the military likes to call an “intervention” — what I call a foreign invasion of a sovereign nation. Afghanistan has dealt with near constant western meddling and military invasion since at least the First Anglo-Afghan War in 1838 as part of what historians call “The Great Game.” If anyone thinks they can step in and win an “easy” war against the Afghan people, they don’t know a thing about the history of that country.

The Department of National Defence and the Canadian Armed Forces like to talk big about themselves as “the largest federal government department” and even claim their ranks are planned to grow from current levels of 119,000 to 126,500 regular members, reservists, and civilian employees. With the current budget at about $28.8B per year, the department spends $227,667 per employee to “defend” Canada at home and abroad. And for what? For whom? What threats are there to us as a nation?

Over $200,000 per year, per employee, may seem like a lot of money for a government department to be spending, but let’s make a comparison with another oft-maligned sector: Education. According to the Fraser Institute Canada spends on average $12,800 per child. This accounts for all spending including teacher salaries and pensions, administrators and support staff, government employees, and capital expenditures like construction of schools and school board facilities.

That’s five million students and 750,000 teachers (not to mention support and admin staff) all being told year after year by their governments that they need to learn how to reduce their costs, told their class sizes need to get ever larger because they just can’t afford to hire more teachers. Meanwhile, MP and MLA salaries go up and resource companies get massive tax subsidies to pollute our world.

Canada’s police and military turn their attention not to international peace but toward oppression and surveillance of domestic populations. Look at the militarized presence of the RCMP in Wet’suwet’en traditional territory this month, storming unarmed defenders in an illegal pre-dawn raid of unceded land that is a clear violation of UNDRIP. Or the Canadian Forces counter-intelligence squad actively surveilling anti-resource extraction activists in Elsipogtog. This is what happens when a security state has a whole lot of resources and not many problems to deal with. They invent targets to use their budget against so they don’t lose their budget to another department, according to Policing Indigenous Movements: Dissent and the Security State. They resort to pre-emptive strikes like what we saw the US perpetrate against Iranian General Qasem Soleimani, which lead to the deaths of 57 Canadians in what can only be described as a retaliatory “mistake.” While educators and students are being told to figure out ways to save money and be more efficient, no such request is ever made of the military. Yet the DND is rife with accusations of torture, wasteful spending, and boggled procurements, such as $14,000 for a study on superheroes and former Defence Minister Peter Mackay dropping $47,000 for a photo-op with a model of a F-35 fighter jet.

Both my grandfathers were veterans of the Second World War and it is under the shadow of their service, with what I know would be their blessing, that I say, “No, we don’t need to spend more on defence in Canada.”

We need to stay out of other countries. We need to educate our citizens about our history and the history of the world. We need to reign in the cultural, political, and social power of police and armed forces. We need to stop wasting money on politics and rhetoric that does nothing to solve the real problems facing the Forces and our society. Otherwise the sacrifice made by my grandfathers and others, in what can be called the last war that actually meant something, will be in vain.