Metro Vancouver will expand existing greenways to connect the region 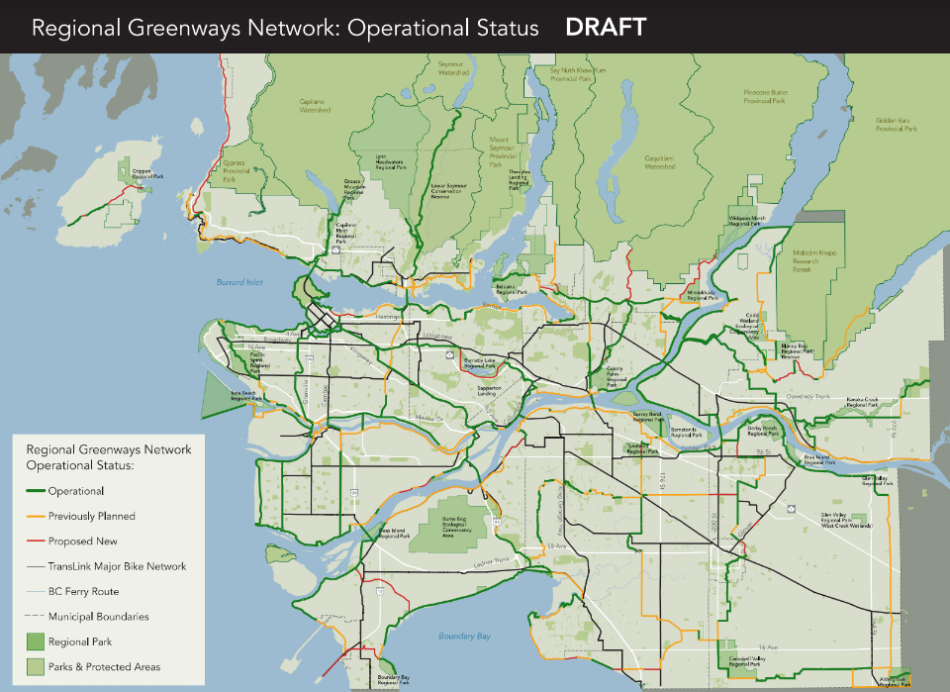 The Metro Vancouver Regional Greenways project is a 30-year development plan which aims to double the length of the region’s greenways from 430 km to 830 km and make the network gap-free by 2050.

The project builds off previous regional plans such as the Greater Vancouver Regional Greenway Vision from 1999 and the Metro 2040 regional plan from 2011. It is facilitated by the Metro Vancouver board, TransLink, and the provincial and federal governments.

The goal of the project is to promote active living and connect residents to natural areas by increasing safe, secure, and accessible routes for biking, walking, and horse-back riding. Protecting and restoring natural ecosystems across the region is also central to its mission.

Another study in Vancouver found that the greenhouse gas emissions from daily transportation decreased by over 20 per cent for residents after a greenway was constructed near them.

As written in the greenways plan, the annual economic impact of providing infrastructure for cyclists is nine times greater than the one-time expenditure of public funds required to construct facilities for them.

This network expansion is being developed and managed through organizations and public agencies such as TransLink, the province, regional municipalities, Indigenous representatives, and other key stakeholders.

The first round of engagement from October 2019 to May 2020 saw broad support for the expansion and included a stakeholder workshop attended by 57 representatives from municipal government, Crown agencies, and NGOs.

The second round of public engagement, which began in the summer and is anticipated to end in the fall, will also include consultations with Indigenous stakeholders, a public questionnaire, and presentations to specific regional committees.

Metro Vancouver says all the feedback collected during this process will inform the development of the plan.

However, potential land-use conflicts and high land-use prices pose a challenge for its implementation.

Eighty-nine per cent of Metro Vancouver residents feel that the greenway expansion is important, and 57 per cent feel that having multi-use pathways in their communities is very important. Some supporters, such as Anmore’s Mayor John McEwen, believe that 30 years is too long a time frame to have the network completed. The report describes this time frame as ambitious.

Progress will be reported every five years, and funding will be provided by agencies that have direct responsibility for providing recreational and active transportation services in the region, such as municipalities, TransLink, and the Metro Vancouver Regional Parks Board. Grant programs from senior levels of government will also be utilized to fund capital expansion.