Ronaghan’s determination helped her recover from a coma 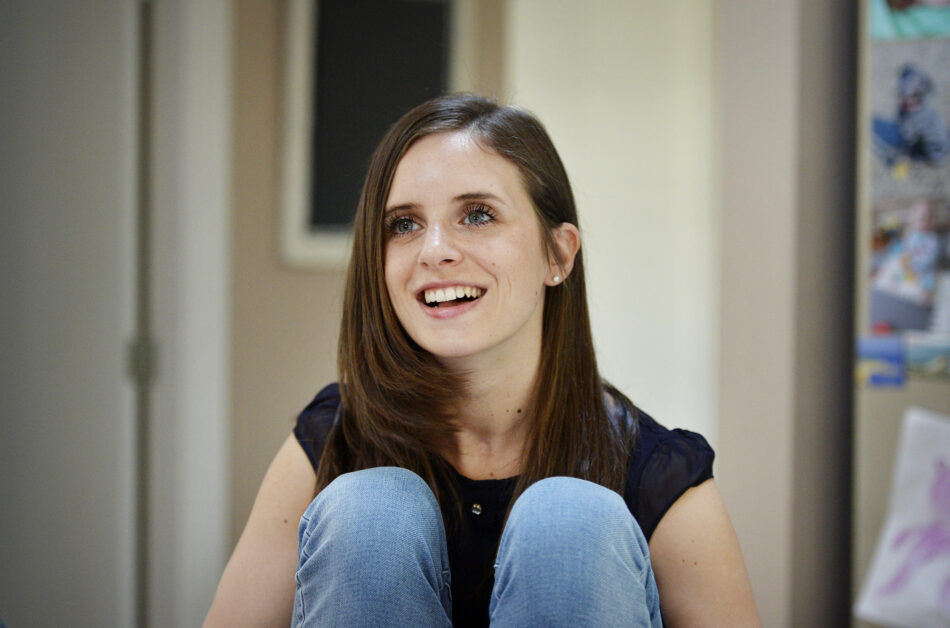 Harriet Ronaghan was about to start classes at KPU in 2007. Then she was in a car crash that left her in a three-month coma with a traumatic brain injury that required emergency surgery.

Against all odds, she was able to overcome her coma and has since visited rehabilitation centres and physiotherapists to share her story. In 2019, she was the recipient of the Coast Mental Health Courage to Come Back Award in the physical rehabilitation category.

Ronaghan kept documenting her process in therapy, writing down her thoughts and feelings. She then turned her experience into a book, You Are My Sunshine: The Journey through My Recovery of a Traumatic Brain Injury. Although it is finished, Ronaghan has delayed the publishing date to focus on her kids and family.

KPU conferred Ronaghan with an Honorary Alumni Award in July.

“Her story of strength and tenacity in the face of great adversity is certainly an inspiration to students, alumni and the whole KPU community,” said David Dryden, chair of the KPU Alumni Association, in a statement.

In some ways, Ronaghan is still recovering from her injury. Thanks to her determination, she has worked hard to get to where she is now.

The Runner: When did you join the KPU community, and why?

Harriet Ronaghan: I was supposed to be starting at KPU in September of 2007, but I was in a car accident, so I didn’t start. Then I got the Coast Mental Health Courage to Come Back Award last year, and one of the [KPU] directors came up to me after my speech, and she said that she would like to make me part of the KPU family.

She emailed me, and she got back to me in November or before then. And she said that [the directors] had voted that I would be presented with the Alumna award, and so I’m like “Thank you.”

COVID happened, and so it got postponed. I was supposed to get the award last September, so she contacted me last summer, and I was like, “I can’t do that,” because I wanted to be able to enjoy it, and I was still breastfeeding my son. He was still young, so I was like, “Can we postpone it?”

We were going to do it this spring but of course COVID [happened] and then it got cancelled. And so we are waiting on it.

How was your time after you recovered from your accident?

I haven’t recovered. My injury isn’t something you recover from. It’s something that you constantly recover from, so I will be changing for the rest of my life basically. That’s kind of hard sometimes. But I got married, I got a baby, and I’m pregnant with number two. I’m doing pretty good. I have written a book, but of course, babies and children and family are more important than book publishing, so I am just going to wait a couple more years.

I went to Royal Columbian Hospital which was the hospital I was at originally when the car accident happened, and my mom took me to the room where I was in the coma, and I asked her which bed I was in and she pointed. And there was a young boy and his dad looking over his bed worried. Then a nurse told him that I was in that bed. The dad then asked, “Five years ago?” and she was like, “No, not even a year ago,” because it hadn’t even been a year. It had been like 10 months or 11 months.

The look on his face was just so touching. He called his wife immediately and told her about me, and I knew that I had to write something or I had to use what had happened to me for positive reasoning to help people. Yeah, I had a car accident and I have a head injury, but it’s not the end of the world. I can go on.

Well, I’m working on cooking a baby, and it’s basically fully cooked now. The first couple of years are a lot of work. We are just looking forward to meeting the baby and knowing the sex because we don’t know.

Go forward. Remember you can. When I woke up from my coma I couldn’t really move, and for a long time I was unhappy and not moving though I wanted to. There was just an inner thought that said, “Okay, this sucks but … I can get better. I can do it.” I kept on telling myself that and I didn’t listen to anything negative that anyone told me. My physiotherapist made us buy a wheelchair which I used three times because he thought I wasn’t going to progress.

My determination was just to show him and everyone that I was going to be fine. I could walk, I could get married, and I could have a life that I loved.