During THRIVE month, KPU invited students and faculty to take a closer look at Indigenous food and culture 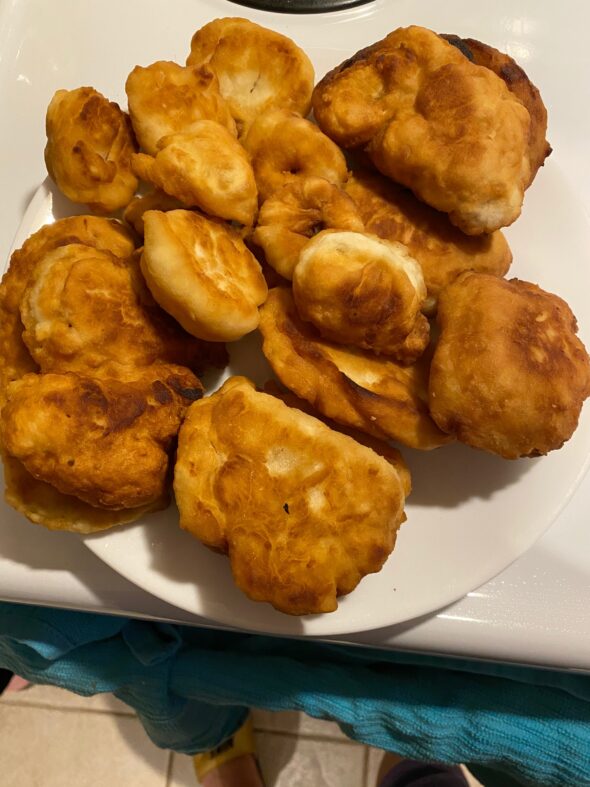 One cup of flour, one tablespoon of baking powder, one teaspoon of salt, one quarter cup of sugar, half a cup of water, and oil for frying are the ingredients required to make bannock, a fry bread.

On Oct. 16, KPU Indigenous Community Coordinator Samantha Daniels, hosted a bannock cooking workshop for THRIVE month. The event was hosted via Microsoft Teams, and it invited students to get a closer look into Indigenous food and culture.

“There are so many different ways to make [bannock]…the way I was taught was from my grandmother. Then I kind of relearned it when I got back to the community. I wasn’t always working in the Indigenous community,” says Daniels.

The event brought nine attendees who paid close attention and asked questions as Daniels plopped the dough mixture into the hot oil.

She says that they got emails from attendees who sent pictures of their bannock creations. “I got a lot of messages from [attendees] saying that they were going to try it that weekend. People were asking about different variations, like if they could use banana.”

Daniels is the first-ever Indigenous Community Coordinator at KPU, and is Anishinaabe from Wiikwemkoong First Nation. She was raised by her grandmother, who spoke Anishinaabemowin. Unfortunately, her language was never passed down to Daniels or her mother because her grandmother faced being put in prison if she was caught speaking or teaching it.

“Bannock was a survival food for my ancestors as they needed food that would keep for days as they travelled,” Daniel wrote in an email to The Runner.

The Indian Act did not allow for traditions to be shared or expressed among Indigenous people.

“So, by making bannock and speaking my language now, I am reclaiming my right to be an Indigenous person on my traditional lands,” she wrote.

She writes that her grandmother taught her the bannock recipe in secret. “My grandmother didn’t want the police to know that she was teaching her culture- the fear still remained.”

Bannock, Daniels says, is a way for a lot of Indigenous people to reconnect with their ancestors. “That is how I view it, and people who around my age, around mid-30s see it…our language, learning how to cook traditional foods, or even harvesting traditional medicines, it’s like reclaiming our culture.”

Unfortunately, she works on a contract basis and will soon leave KPU in March. She isn’t sure if there is going to be another Indigenous community coordinator.

“Many Indigenous peoples, especially in education, work on a contract basis, so there is no job security whether there is a pandemic or not,” Daniels wrote. “Many Indigenous peoples are asked to share their culture with their employer where the teaching stays… but the person who taught the lesson has long moved on to another contract position, and the cycle continues with a new hire.”

Before she leaves, Daniels says she wants to start doing traditional workshops, so more KPU students can learn about Indigenous culture. At the moment, Indigenous Services has a book club which features Indigenous writers.

For more information on future events and how to get involved in the book club, email Daniels at samantha.daniels@kpu.ca.